Once known as Sir William Macdonald, Xpey’ reflects the fact that East Van used to be home to sprawling cedar trees
Jun 1, 2018 5:10 PM By: John Kurucz 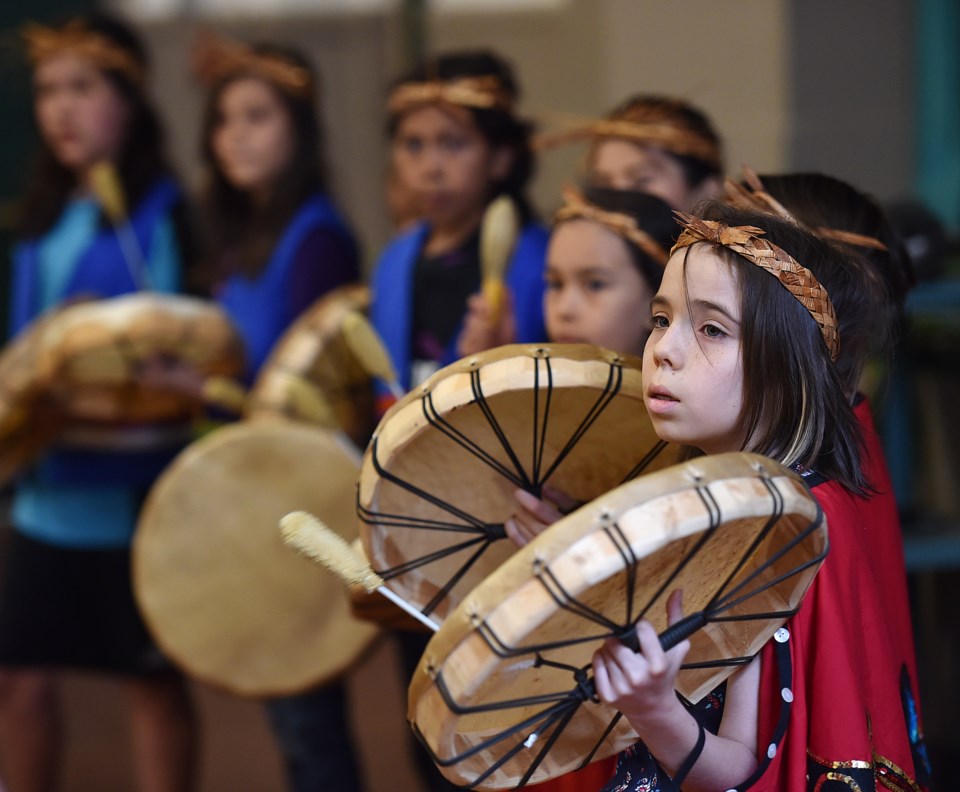 A grove of cedar trees once towered above the intersection of what is now Victoria Drive and Hastings Street.

Members of the Musqueam First Nation believe those trees cleansed evil from the soul and whispered to one another.

Those whispers gave way to a rousing chorus of thanks and recognition Friday as elders from a number of local First Nations gathered to recognize the importance of cedar — or Xpey’ in the Musqueam dialect of henqeminem — to future generations.

“For us, this is a legal name change,” said Musqueam Nation member James Kew.

In accordance with Musqueam custom, the ceremony required the presence of families and witnesses as well as gift exchanges. Friday’s family was made up of teachers and administrators from the Xpey’ school community. The witnesses were elders from the Squamish, Musqueam and Tsleil-Waututh First Nations.

Because First Nations traditions are oral and not written, members of several Indigenous communities needed to be present to relay the news of the day.

“I think it’s very poignant that we stand in the school to do this work because as longhouse people, it was our longhouse that was our school, it was the longhouse that brought everyone together to do work like this today,” said Musqueam member Wade Grant. “It’s no different now as we stand in these halls and we call witnesses.”

Musqueam members used to gift workers with blanket, but Friday’s gifts were exchanged via a 50 cent transaction. Fifty cents was the amount arrived at based on the cost of a Hudson’s Bay blanket in centuries past.

Tsleil-Waututh elder Slahola, or Ernie George, recalled how names and locations were constantly in flux as he grew up. Words used by his grandparents, aunts and uncles disappeared.

“In my little mind I couldn’t figure out, how come? I couldn’t understand why,” he said. “We’re slowly getting back feelings, feelings that were taken away from us 150, 180 years ago. Those feelings are coming back into our hearts.”

The ceremonial aspect of the day’s events gave way to students singing, dancing and drumming alongside First Nations members.

The Coast Salish Anthem was performed by a group of 10-year-olds. The original school, which began in temporary buildings at Victoria and Pender streets in 1905, was named Cedar Cove elementary because of its proximity to Burrard Inlet. It was replaced with a permanent structure one year later and named after Sir William Macdonald, a tobacco merchant and educational philanthropist.

The school became an Aboriginal focus school in 2012, and the new name aligns with the change from a local catchment to a district catchment.

The name-change exercise was two years in the making and initiated in late October 2015. A re-naming committee was struck consisting of the school’s principal, VSB staff and representatives from the student and parent population.

More than 30 names were submitted over a week-long process by 45 people. Cedar Cove received the most votes among committee members.

District staff then asked Musqueam Nation members for help with the new moniker. A translation and phonic equivalency were returned to the board in early October of last year.

“It’s in them, it’s in their families,” said Xpey’ PAC co-chair Jolene Andrew. “That’s how they talk, that’s what they believe and that’s how they feel. We’re talking to them in a way that they really understand it.”