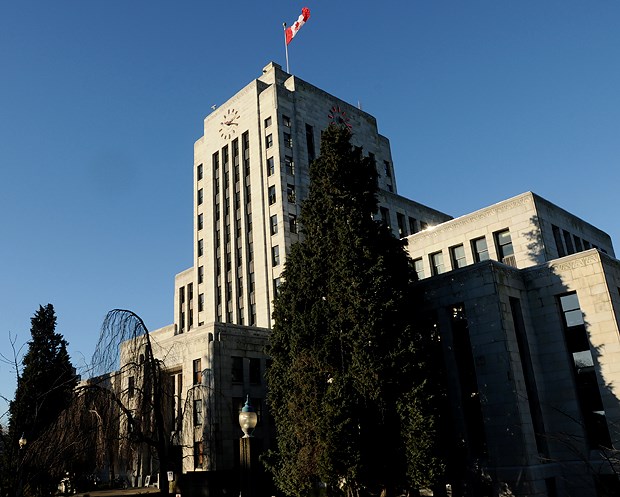 A citizens’ group battling to stop a tower from rising above Emery Barnes Park goes to B.C. Supreme Court on Aug. 25.

Community Association of New Yaletown wants a judge to overturn a rezoning and land swap deal that it says were cloaked in secrecy and in violation of the Vancouver Charter. Brenhill Developments agreed to give 1099 Richards St. to the City of Vancouver after it builds a 13-storey social housing project on the site, so it could then build a 36-storey tower on 508 Helmcken, site of the city’s Jubilee House social housing project built in 1985. The

CANY claims the July 16, 2013 public hearing was unfair and illegal because the city and Brenhill kept secret their Jan. 28, 2013 contract for the non-tendered land sale and the outcome was predetermined. CANY claims the tower would be 4.5 times higher than what the Downtown Official Development Plan allows.

City hall’s July 31 response to CANY’s amended filing said it followed proper procedure from the start. It claimed the land swap was discussed by the parties in 2011 and approved by city council in October 2012. City hall said the basic terms of the deal were published in the June 4, 2013 staff report.

Brenhill proposed spending $24 million on the $30.6 million New Jubilee House, with the city contributing $6.6 million from the Helmcken land sale. Staff valued the community amenity package at $25 million: $1 million cash from Brenhill to the city affordable housing fund and $24 million in-kind for the social housing.

In its July 17 response, developer Brenhill cast doubt on CANY, because it did not exist during the rezoning “and appears to have been created for the purposes of this litigation.”

“The transaction was thoroughly described in the city staff report, and the submissions by members of the public related to view impacts and shadowing, not having anything to do with the details of legal agreements,” according to Brenhill owner Brent Kerr’s affidavit.

CANY court filings maintain the public did not have all the facts before city council voted and that the disposal of public property should have instead gone through a public tender process.

CANY’s original petition was filed May 6 and amended July 3. The judicial review hearing is scheduled for four days at the Law Courts and it is expected the judge will reserve decision.