Panelists criticized Straight's cover for not including people of colour, ignoring an Iranian immigrant's experience
May 23, 2018 5:14 PM By: Becca Clarkson 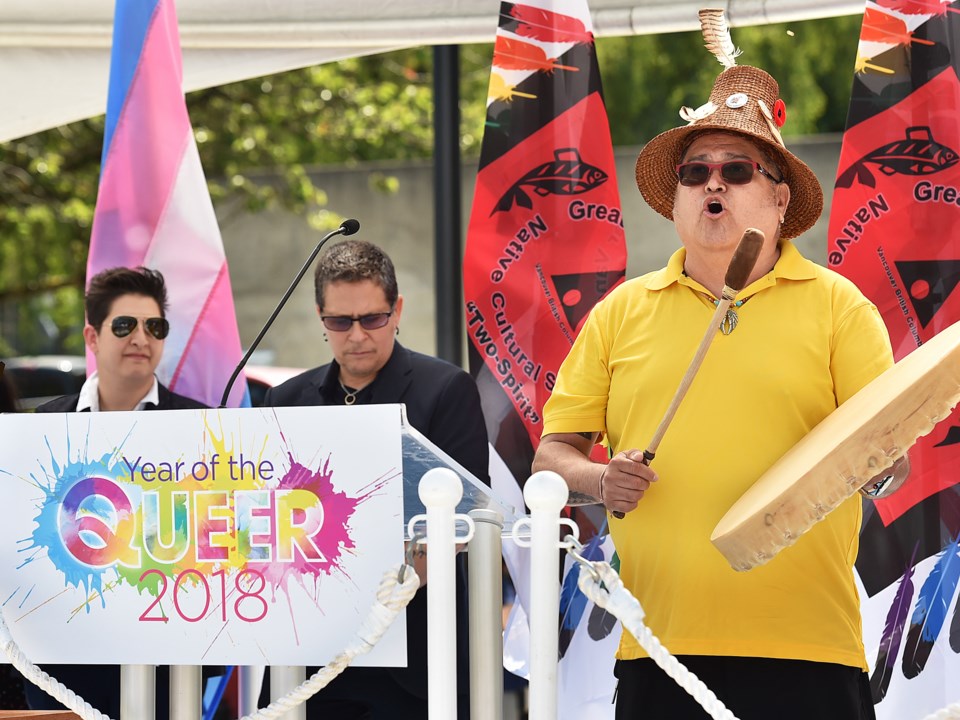 Moments before the pride flag is raised to full mast at city hall, it nearly knocks one queer organizer over as photographers rush to catch a historical moment.

“Stop trying to erase queer people of colour!” Anoushka Ratnarajah yells, partially at the flag threatening to push the biracial queer artistic director of Vancouver’s Queer Film Festival out of the picture.

While there is a smile on her face, the crowd gathered for the proclamation of 2018 as “Year of the Queer” witnessed this sentiment become a theme throughout the celebratory event on May 23. Just an hour earlier, one queer person of colour’s (POC) experience was repeatedly ignored by members of a panel discussion held in council’s chamber.

The Georgia Straight came under scrutiny this week after publishing a cover with five queer identifying organizers, none of whom represented queer people of colour, according to some of the 11 panellists.

However, one of the people on the cover was Fay Nass.

“I think it was just much easier for [the panellists] to erase me to move their own narrative forward,” said Nass, an Iranian immigrant and artistic director of the Frank Theatre Company. After the celebration, she told the Courier that she was frustrated that no one seems interested in acknowledging what was good about the picture.

Nass didn’t sit on the panel of queer community members — who spoke about the contributions their organizations are making to the social, cultural and artistic landscape of Vancouver— but she was in the room as many spoke out against the cover.

“There’s such a diversity of people on the panel, but not so much on the cover,” said Azuka Kamdibe from Black Lives Matter Vancouver. “The Year of the Queer will be a year that includes people of colour and people living with disabilities.”

Vision Coun. Tim Stevenson, who was moderating, agreed that there was a lack of representation.

“The city had no choice in the matter, but we did deliberately choose a very diverse panel,” said Stevenson.

When he pointed out that there was no representation of queer Asians or black people on the cover he also noted there weren’t any white men.

“We’re okay with that part,” yelled someone from the audience.

Fatima Jaffer, a member of the panel representing Trikone Vancouver, the city’s oldest queer South Asian organization, said that when these “narrow messages and images of queerness” are put out there by media, objecting to it should not just be the responsibility of LGBTQ people of colour. The chamber filled with applause in response.

“This paper has been staring at us from boxes and in restaurants all week. It has an impact on racialized people, and it makes me sad,” Jaffer said.

The province's resource centre for queer, trans and two-spirited folk, QMUNITY, was represented on the panel by executive director Osmel Guerra Maynes.

“No longer should we continue living in a society where racialized queer voices are silent,” he added to the end of the discussion. "We need to ask ‘who is missing from this table?’ Because in many cases those are the voices that are needed to continue moving forward the society and community that we have."

Nass was missing from the table, but outside on Helena Gutteridge Plaza she had a microphone and a story to share of her experience immigrating to Canada at age 18 with her family.

“In 2000, I came to Vancouver as a secular, ESL Persian, a non-binary not-out-yet lesbian trying to fit in at West Vancouver high in theatre, no less.” Nass said, adding that people called her a FOB or “fresh off the boat.”

She went on to be the only queer person of colour at a theatre program in Victoria, and upon returning to Vancouver in 2006 “with $50K in student loans and no network,” volunteered for the Queer Film Festival which she attributes as the secret garden she’d been searching for in all the liminal spaces she existed in. Eventually she found Screaming Weenie Productions, which is now known as frank theatre company.

“Going to queer events was my refuge, even if I was still a minority, a POC and an immigrant. It felt like a place to start a sense of belonging.”

While she celebrated the accomplishments of the local queer organizations celebrating anniversaries, she recognized that the city is still a long way from equity.

And though Nass chose not to address the panel discussion that dismissed her experience, Ratnarajah did while making a speech after her.

“I just want to say it’s pretty shameful the way that Fay and her work has been invisibilized by a lot of folks who brought up the cover, and also by the city for not recognizing how much work she does.”

But for Nass, this experience is a disheartening yet common reality.

“I’m never white enough to get the privileges, but never visible enough to have a voice as a person of colour.”

She believes that true progress will happen if POC examine their own privileges, such as English being their mother tongue or being born in Canada.

“It’s very easy to keep maintaining the narrative of POC versus people who are white but that washes away all the intersection and paradigms within.”