Yoga icon still limber after all these years 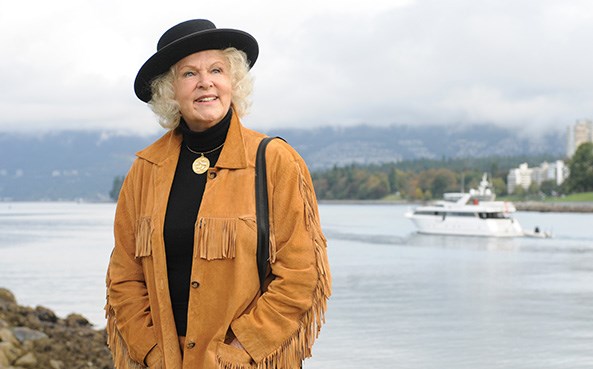 Back before yoga was “hot” and mainstream in Vancouver, Kareen Zebroff taught meditation and the downward dog.

Any Canadian who owned a TV in the 1970s likely remembers Zebroff’s half- hour yoga program. In addition to hosting her TV show Yoga & Nutrition for 16 years, Zebroff wrote nine books on the same theme of exercise and eating well. She also acted in such locally shot shows as The Beachcombers, Danger Bay and MacGyver.

In honour of the United Nations’ International Day of Older Persons, Oct. 1, the Courier caught up with the Vancouver icon, now in her 70s.

Born in 1941, Zebroff said she used to tell everyone her exact age, but doesn’t anymore.

“[People] see what they associate with that number and I am not the norm,” she said by phone after just finishing her morning walk with Peter, her husband of 52 years.

The German-born daughter of a doctor, Zebroff keeps busy these days with her studies in German new medicine and proudly boasts that unlike many of her peers, she doesn’t take any medications. She still practises yoga and loves doing circuits at the gym in addition to her daily 6 a.m. walks.

Zebroff said she loves being older. “Now I am wise-smart. Common sense-smart based on experience and being able to have calmed down about things,” she said. Recalling a recent series of challenges her family has faced, including the flooding of her apartment and her husband totaling their car, she said people in their youth are misguided in what they expect from life.

“It is wonderful to realize you are not here to be happy … you are here to learn, baby. You are in school, it behooves you to learn the lessons.”

CBC producer Pamela Post met Zebroff outside an organic grocery in 2008. “Before Kareen was a yoga TV star she was a teacher.

And to this day, she loves to share her wisdom and experiences with people… I like to say she is lit from within,” said Post via email.

Zebroff and her teachings have not always been so popular with everyone. In the early 1970s she and a few other yoga teachers had to appear at city hall to answer to a minister’s charge they were teaching witchcraft with their yoga classes. The instructors had to explain to the mayor that yoga wasn’t in fact a cult or religion.

Jutta Wiedermann, 83, was one of the other yoga instructors who faced city hall with Zebroff. “Now, when you look at how popular yoga is and when it has been seen how valuable yoga is it is difficult to understand, but you know anything that is not known is frightening to many people,” she said.

Wiedermann and Zebroff bonded through their shared experience defending yoga and have been close friends for 40 years. “I love her,” Wiedermann said, noting she speaks daily to Zebroff and often turns to her for advice.

Zebroff is finishing work on her tenth book. “A fun advice book on how to survive 50 years of marriage and other secrets,” she said.

Zebroff hints at some of the secrets to her long and self-described happy marriage that she will share in the book. “Yoga and sex and politeness. Respect, being able to say sorry and kissing meaningfully when he leaves and rushing to the door to say hello at the end of the day.”