Winger has fully bought in to the Canucks development program in Utica.
Sep 10, 2019 3:58 PM By: Daniel Wagner 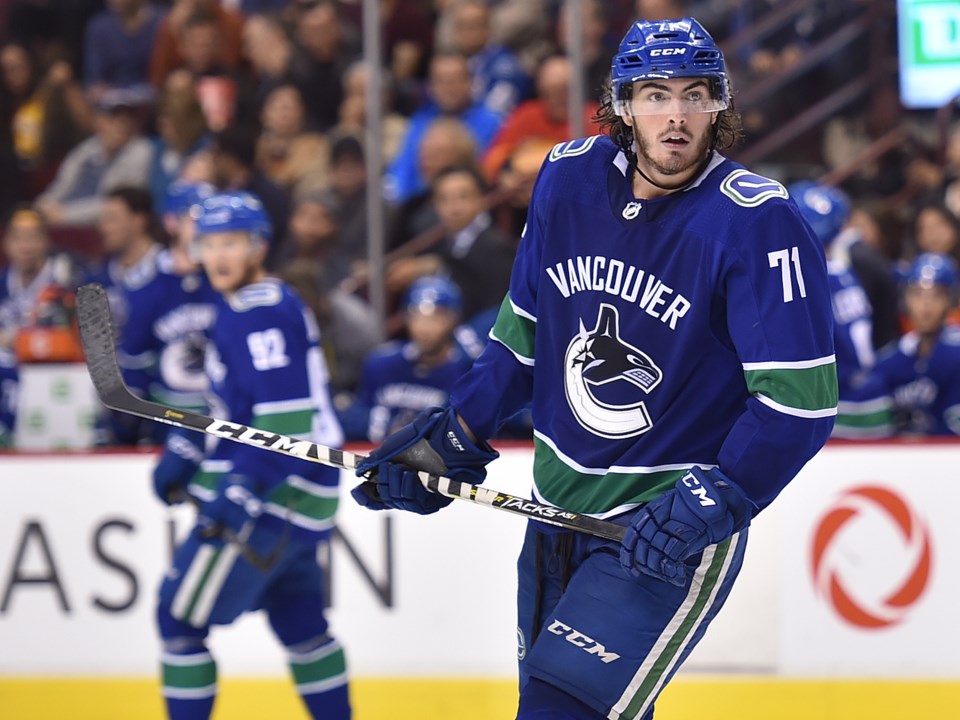 When the Canucks signed Zack MacEwen as a free agent out of the QMJHL, it was about as under-the-radar as a signing can get. MacEwen was a late-bloomer who had put up a decent, but not outstanding, 74 points in 66 games as a 20-year-old overager after middling numbers in his one previous QMJHL season.

Generally speaking, such players don’t go on to much success in professional hockey. Canucks fans would be familiar with this from previous undrafted free agents out of junior hockey like Dane Fox, who had a whopping 64 goals and 107 points in 67 games in his over-age season in the OHL. Unfortunately, Fox couldn’t even crack the Utica Comets’ lineup and spent his professional career in North America in the ECHL before heading overseas to ply his trade in Germany.

There were other red flags with MacEwen as well: his breakout season came while playing with the supremely talented, if somewhat short, Vitali Abramov, who had 104 points to MacEwen’s 74. Also, Abramov was only 18 years old at the time. There was reason to question whether MacEwen’s numbers were solely a reflection of Abramov.

There was also MacEwen’s 6’4” stature: did he put up points in junior primarily because of his size advantage? While there were certainly things to like about MacEwen’s game, there were plenty of reasons to be skeptical.

Then a funny thing happened: MacEwen stepped right into the Utica Comets’ lineup and put up 33 points in 66 games as a rookie. That’s solid production for a rookie and was good for fourth on the Comets in scoring. The team gave him the Ian Anderson Award as their most improved player.

Then, in the 2018-19 season, MacEwen proved it wasn’t a fluke and took a big step forward, doubling his goal totals. He finished third on the Comets in scoring with 22 goals and 52 points in 69 games and earned a four-game call up to the Canucks after a four-point game against the Rochester Americans.

What’s intriguing about MacEwen is that he seems like a player that can fit anywhere in the lineup. MacEwen is a good skater, particularly for his 6’4” size, so it’s easy to picture him on a fourth line, banging and crashing on the forecheck. But he’s not just a grinder: MacEwen has legitimate skill, including an exceptional shot.

Even in drills at prospect camp, MacEwen’s shot caught the eye. The puck practically leaps off his stick with little-to-no drawback and it’s easy to see how it could catch a goaltender completely off-guard.

“It's something I work on every day,” said MacEwen, “whether it’s quick release or accuracy or anything.”

MacEwen’s elevation up the prospect ranks hasn’t been sudden or quick. It’s come as a result of continually taking steps forward in his development, making gradual and steady improvements. Ryan Johnson, the Canucks directed of player development and GM of the Utica Comets, has long held up MacEwen as an example.

“He's just been all in, he's taken every resource we've had from day one,” said Johson. “You talk to our staff: he's as coachable a kid as you find, he works on his craft every single day. He comes to the arena with a purpose and has a professionalism to him that you can't not get better, the way he approaches things.”

When asked about being held up as an example of the Comets’ development program, MacEwen deflects the credit away from himself.

“All I have to say about it is just that the coaching staff helps, they know what they’re talking about,” he said. “And if you put the work in and you use what they're telling you to improve yourself, they're going to notice it, and it's going to improve your game.”

A big reason why MacEwen was such a late bloomer is that he hit a growth spurt at 17: he went from 5’8” to 6’4” in one year. That kind of quick growth can wreak havoc with your coordination, but it also changed how people viewed his potential. He wasn’t drafted by a CHL team primarily because of his small size, then suddenly he towered over the other players on the ice.

When he got to Utica, there were a lot of areas where he needed significant improvement, but MacEwen embraced every challenge.

“We saw this blank canvas with Zack,” said Johnson, “a big man that had a skillset but we really had to improve the small details: the below the dots play, the puck protection, but again, week to week, he takes information and just applies it instantly.”

That’s been key with MacEwen: beyond his size and skill, he has a great head for the game. It’s enabled him to make adjustments at every level, including his few games in the NHL.

“I find there's usually some kind of awakening where you're like, ‘Okay, I can't do that anymore,’” MacEwen said with a laugh. “And then you adjust and you move on.

“I had Trent Cull tell me something my first year that stuck with me,” he added. “He said, ‘Don't try to make five spectacular plays a game, do 20 ordinary plays spectacularly.’”

So what lies ahead for MacEwen in the coming season? Will his spectacular execution of ordinary plays get him in the Canucks lineup to start the season? It’s unlikely, simply because of the logjam at winger ahead of him, but it’s not entirely out of the question. It would just require a few veterans to get moved off the roster.

Most likely, however, MacEwen will start the season in the AHL, continuing to make incremental improvements to the details of his game. Then, when injuries inevitably strike the Canucks’ lineup, MacEwen should be at the top of the call-up list.

“I expect him to take another big step and that's all Zack has done,” said Johnson. “He's jumped into our development process right from day one and he's turned over every stone to make himself a player...It's not just year to year, but month a month, he just continues to take steps and take steps.”

The next big step for MacEwen is making the NHL and sticking in the Canucks lineup. The question after that is how far he can go.

“I don't think I've even come close to my ceiling yet,” he said. “It’s all about just getting reps and more experience at each different level and using that experience to just work on details and little things in your game to keep improving, keep getting better every day.”