As the decline in sales of detached houses starts to flatten, higher-end condos are next to be “caught in the same downdraft”
Mar 20, 2019 10:01 AM By: Joannah Connolly 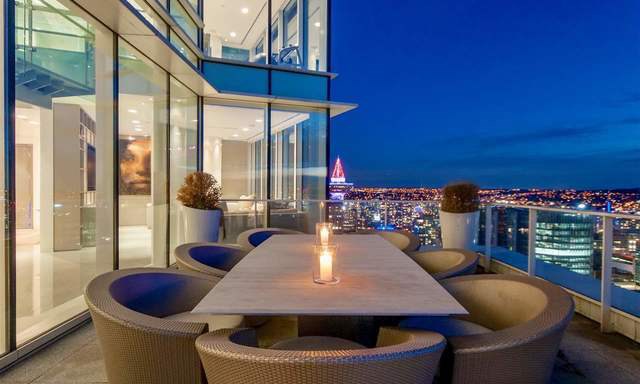 The Fairmont Pacific Rim penthouse has 2,900 sq.ft. of terrace space with views of Coal Harbour and the Burrard Inlet.Primary listing agent: Malcolm Hasman

Sales of Vancouver condos above $1 million have plummeted by 66 per cent year over year, according to a report by Sotheby’s International Realty Canada, released March 20.

Overall, sales of $1 million-plus homes (condos, attached homes and detached houses) fell 52 per cent in the first two months of 2019, to 279 properties sold, versus 576 sold in January and February 2018.

Vancouver’s detached sector, which is almost entirely $1 million-plus, had seen steeper sales volume declines than the condo market, but the slowdown seems to be flattening out.

In the first two months of 2019, detached home sales over $1 million fell 35 per cent to 146 homes sold, compared with 223 homes sold in the same period the year prior.

The Sotheby’s report said, “The $1-2 million segment of the market saw the most activity, however. Sales experienced a 21 per cent reduction.” Steeper year-over-year sales declines were seen in the market for homes between $2 million and $4 million, which saw a 48 per cent drop.

Brad Henderson, president and CEO of Sotheby’s International Realty Canada, told Glacier Media in an interview, “All different types of properties are being caught in the same downdraft, but are being caught at different times… The condo market was for years the asset of choice for many buyer cohorts – first-time buyers, move-up buyers looking for a better location, rightsizers coming out of larger homes, and domestic and overseas investors. With the last of these, particularly Chinese investors, having a harder time getting their money out of China, plus the foreign buyer tax increasing, that has caused an overall malaise among all the other buyer cohorts.”

Henderson observed that real estate cycles are both inevitable and self-fulfilling. “We’re reminded that what goes up must come down, and vice versa. In Vancouver, people are saying there’s only one way to go, and that’s down. But the same conversation was happening in reverse a couple of years ago. People always think that prices in a down market can only go down, and a rising market can only keep rising.”

He said that the “modest” new home buyer incentives offered in the 2019 Federal Budget “are not going to significantly move the market.”

However, Henderson expressed some cautious optimism – with a caveat – on Vancouver’s real estate market.

He said, “What we’ve seen is both buyers and sellers moving to the sidelines. Buyers are no longer willing to buy for the price offered and sellers aren’t willing to sell at the prices buyers want. That’s created gridlock which has significantly contributed to the decrease in sales activity. But lately we’ve seen more people viewing properties, which they don’t usually do if they don’t want to buy, along with more people going to open houses, and more optimism expressed to us by our agents. Those are the precursors of a market that will see an increase in activity. It remains to be seen if that interest translates into actions and prices adjust accordingly. But there’s a lot less doom and gloom than six months ago.”