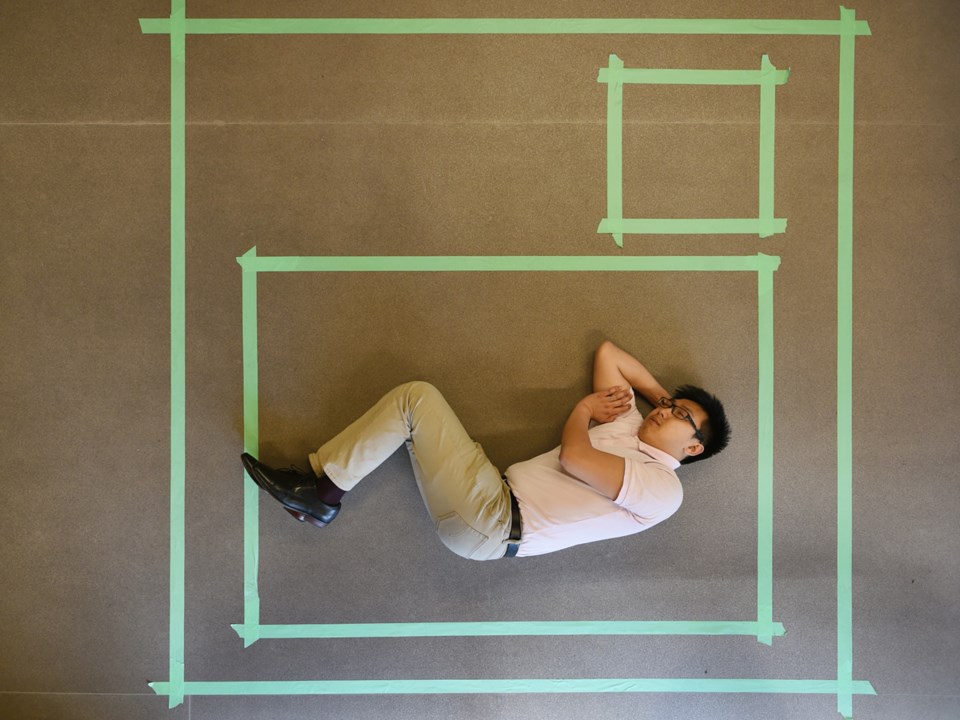 The City of Vancouver is given consideration for small 'inboard,' also known as borrowed light bedrooms, in projects proposed under its Moderate Income Rental Housing Pilot Program. Photo Dan Toulgoet

At 6’3" tall, Green Party Coun. Michael Wiebe admitted, at a recent public hearing, he was “struggling” with the design of some of the three-bedroom apartments planned for a rental building on the last block of East Hastings near Boundary Road.

The third bedrooms in some of the suites will be small “inboard” rooms.

Usually, inboard bedrooms use sliding glass partition walls or clerestory windows — a row of windows above eye level — to provide access to daylight via rooms that have an external wall with windows.

Typically, they haven’t been allowed as part of secured rental projects in Vancouver, although there have been past examples in other types of projects within the city, as well as in other municipalities such as New Westminster.

Now, a handful will be produced in buildings approved under the city's Moderate Income Rental Housing Pilot Program (MIRHPP), which requires 20 per cent of the residential floor space in such buildings to be reserved for households with incomes between $30,000 and $80,000. Relaxations in unit sizes and configurations are among concessions offered to developers through the pilot program, the goal of which is to ensure some affordability, as well as some family-size suites, are built into the projects.

Wiebe said he would barely be able to “fit crossways in either direction” in such a small bedroom, and he prefers rooms with access to fresh air. Nevertheless, he voted in favour of the rezoning application for the East Hastings building, as well as for an application for a similar building by the same developer — PCI Developments — planned for the same block.

In total, the pair of 14-storey East Hastings Street buildings, which were approved under MIRHPP, will produce 212 rental apartments, 43 of which will be for households earning less than $80,000. Five of those 43 apartments will be three-bedroom suites — the third rooms being inboard bedrooms. The smallest will measure approximately 8’1” by 8’2” while others are larger. Three-bedroom moderate-income units will rent for about $2,000 a month.

In a follow-up interview after the public hearing, Wiebe explained to the Courier why he isn’t sold on inboard bedrooms.

“We need to ensure that everyone feels valued when they get their space, and that we try to ensure that there's not different standards for different classes, and that moving forward we find techniques and architecture that allow us to continue to have the mix that we're going for, which is the family-unit mix,” he said.

“We're trying to create a more family-friendly city and the liveability in the suites doesn't really meet the kind of threshold that we're hoping to have for the city. So I'm supportive, obviously, of the affordable projects, the MIRHPP projects, [but], moving forward, I hope we find architectural ways to eliminate the need for inboarding to meet those affordability targets.”

Finding a family-sized, three-bedroom apartment that’s relatively affordable to rent is a daunting, if not impossible, task in Vancouver.

Only about one per cent of the total purpose-built rental stock in the city are homes with three or more bedrooms, according to the City of Vancouver.

While city policy requires that rental projects undergoing rezoning, including MIRHPP ones, include a minimum of 35 per cent family-size units, defined as those with two or more bedrooms, it doesn’t require a minimum proportion be three bedrooms or larger.

“Delivering a significant number of them in new projects is particularly challenging, especially in non-corner units, and more so at deeply below-market rates,” the city’s communication department told the Courier.

Given that affordable three-bedroom units are in short supply and many families want them, the city decided to consider inboard bedrooms for moderate-income units in MIRHPP buildings “to help address the design and economic challenges of delivering these much-needed larger family-size units.” If the suite is sprinklered, which is current code for all new buildings, an egress window is not required. This applies to all multi-family dwellings, including single family homes with basement suites.

But like Wiebe, COPE Coun. Jean Swanson, who voted against the East Hastings buildings for myriad reasons, questions the livability of inboard bedrooms. She’s especially worried about standards dropping for lower-income people.

“Eight feet by eight feet with no window is more like a closet than a bedroom. Kids and adults need space to play and keep their stuff and do their work,” she said.

Even Green Party Coun. Adriane Carr, a fan of MIRHPP because it’s finally creating apartments that middle-income earners can afford, spoke against inboard bedrooms despite voting in favour of the East Hastings Street buildings.

“I will not be speaking in support of the inboard bedrooms. I’m not really a fan of [them]. I like fresh air and light and direct light into people’s rooms,” she said.

Renters, she said, are already turning closets or pantries into bedrooms for their children, so inboard bedrooms are an improvement.

DeGenova is not alone in her defense of the inclusion of inboard bedrooms. Developers see them as a viable way to create family-sized homes.

Take Bryn Davidson who runs Lanefab, a company that builds laneway homes. He said developers have long argued that it would be much easier and cheaper to provide three-bedroom units if inboard bedrooms were allowed.

“On the surface, it seems reasonable to insist on windows in bedrooms, but in practice it means you have to have buildings that have much more articulated exteriors (and are therefore more expensive, space consuming, and a bit less energy efficient to build),” he told the Courier in an email.

“I'm guessing they were allowed in the MIRHPP program to keep costs down and get more housing onto limited land.”

Davidson added that in newer buildings fresh air can be provided through a ventilation system and light can come in through an interior window, so developers and builders don't have to rely on windows for air or light as they did in the past.

Like De Genova, he said many families are already using windowless dens or cold, enclosed balconies as extra bedrooms.

“These are both allowed by the city, but both are substandard relative to inboard bedrooms... so I think the city is being overly uptight in limiting the use of inboards,” he said.

Many loft-style condos, Davidson added, including his, have inboard bedrooms. His own child’s room has curtains on two sides.

While many in the architecture and planning community may support a ban on inboards, he’s of the opinion that the city should try everything during a housing crisis.

“I think there are some fears about tenements etc. that are holdovers from the old days... or fears that it's somehow just a giveaway to developers... but I'm of the general opinion that all housing options should be on the table,” Davidson said. “When it comes to micro-suites or inboard bedrooms, if there end up being problems, then we can always course correct, but we shouldn't shut down housing options pre-emptively.”

Tim Grant, vice-president of development for PCI Developments, said the average size of market and moderate income bedrooms in the two East Hastings Street buildings will be 9’9” x 9’10” for master bedrooms, 9’0” x 9’7” for second bedrooms, and 8’2” x 8’1” for third bedrooms.

The measurements, he said, are consistent with PCI’s recently completed, and fully occupied, market rental building at 388 Kaslo St. developed under the City of Vancouver's secured market rental housing policy.

“The inboard bedrooms are directly adjacent to the living rooms where they have access to shared light, and we have designed them to include internal windows or glazed sliding doors. All bedrooms, including inboard bedrooms, are mechanically ventilated and the size of these bedrooms is consistent with other market rental projects in the area,” he explained in an email.

“Our design team has included suite layouts for all units across both projects, which highlight that all inboard bedrooms can accommodate single, double or queen beds with bedside tables.”

The East Hastings Street projects are just two of the handful of buildings council has so far approved under MIRHPP.

In January, council greenlit a five-storey rental building planned for Stainsbury Avenue near Trout Lake. It will feature five moderate income units with inboard bedrooms. One will measure 8’ by 9’, while the other four will be about 9’ by 12’5” in size.

A third MIRHPP project at Larch and West Second Avenue, which was approved late last year, will include one three-bedroom moderate-income unit with an inboard bedroom measuring roughly 8’3” by 8’3”.

Wittstock also has personal experience with small spaces. When his daughter was a newborn, her room was a five-by-eight walk-in closet.

“I think we need a range of unit types and styles to serve families that need to be housed. I don’t have any issue in principle with inboard bedrooms,” he told the Courier.

"Typically you try to make them feel like funky flexible loft spaces with sliding glass panel doors. The glass panel doors help to get natural light into the bedrooms. But often people like these precisely because they don’t have an outside window... they prefer the dark and quiet for sleeping.”

Wittstock said he’s built hundreds of units with inboard bedrooms in Gastown and Mount Pleasant in the past and, most recently, in New Westminster.