Motion passed Monday could lead to bylaw ensuring evicted tenants have a new home to move into
Jul 24, 2018 10:29 AM By: Kelvin Gawley 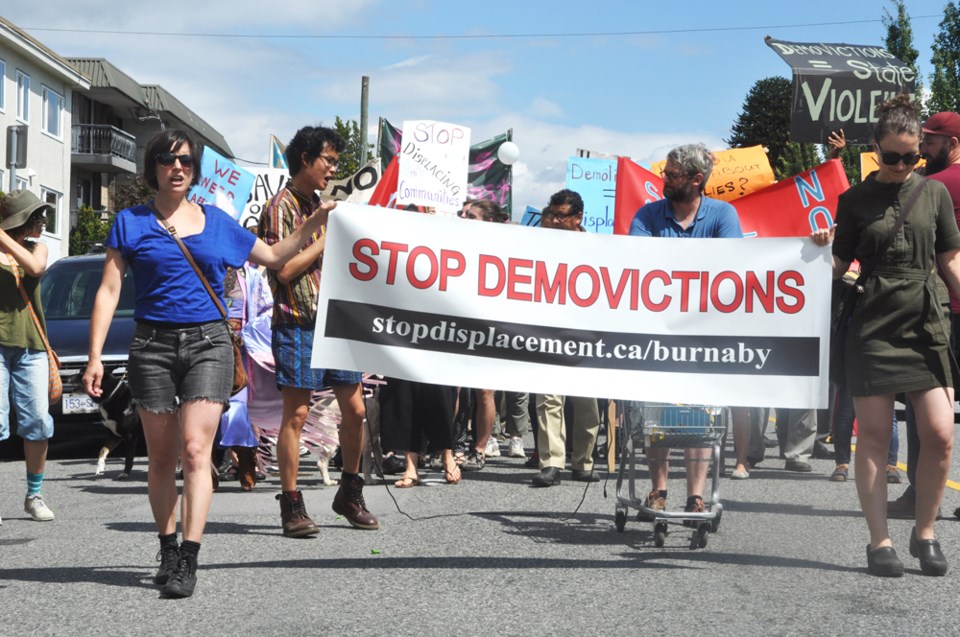 Dozens of people participated in a rally Saturday organized by housing activists protesting demovictions in the Metrotown area. The rally started at 5025 Imperial St., but eventually the group walked through the streets, ending up in Maywood Park. Organizers are calling for the city to put a moratorium on all demolitions of older buildings in the area.Jeremy Deutsch

On Monday, a motion introduced by Coun. Colleen Jordan passed unanimously at the council’s final meeting before its summer break. It asked staff to begin work on a bylaw that would ensure tenants evicted when their apartment building is slated for demolition would have a new rental home to move into.

This would mean a one-to-one replacement ratio – every unit destroyed must be replaced by a new apartment “at established, affordable rates.”

The motion also asked that the bylaw include a requirement that all redevelopments of rental buildings include non-market or social housing.

If such a bylaw is passed, it would create a drastically different landscape for developers in Burnaby who plan to tear down older low-rise apartment buildings to make way for condo towers.

City council has been harshly criticized by housing activists for policies allowing low-income people to be displaced from their affordable apartments in Metrotown.

Burnaby saw a net loss of 712 rental units between 2010 and 2017, while much of Metro Vancouver saw increases, according to the Canada Mortgage and Housing Corporation.

Monday’s motion followed a special council meeting called last week in which council rescinded first reading of two redevelopment proposals in Metrotown that would have razed three older low-rise apartment buildings to make way for two new towers. Those proposals have been sent back to staff and could become the first in the province to be zoned for rentals.

Jordan said that although the province passed legislation in May giving municipalities the power to create rental zoning, she only learned at a Metro Vancouver meeting on July 13 that they could zone properties to be partially rental and partially strata.

Corrigan and fellow councillors heaped praise on Jordan for bringing the motion forward in time for Monday’s meeting.

Coun. Nick Volkow said she was “far too modest” for the work she has done.

“She has worked her buns off .. She is an expert in this field,” he said.