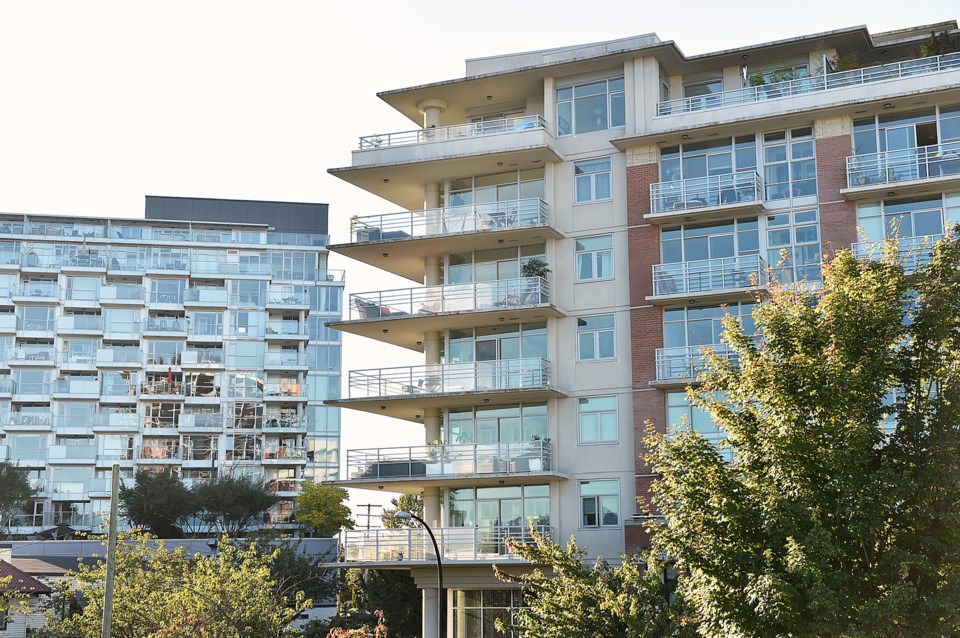 Increases in the number and severity of claims are a major force behind the sometimes shocking jump in premiums stratas face. File photo Dan Toulgoet

The cost of catastrophes, construction, claims and reinsurance has pushed insurance premiums on many British Columbia condominiums through the roof.

While petitions and critics call for government intervention, industry experts say it’s a complex market issue with no easy fix. And for some, it’s about to get worse.

“We saw half of the stratas get hit on Dec. 31, and the other half are going to get hit on April 30,” said Mike Alavi, senior property manager with Korecki Real Estate Services Inc.

The company manages 7,500 strata units across dozens of buildings in the Lower Mainland. Of the strata corporations that have recently renewed their insurance, Alavi said, around 90 per cent saw premium increases of between 50 per cent and 100 per cent.

That is well above the Insurance Bureau of Canada’s (IBC) provincial average of 35 per cent, but below some of the 300 per cent to 600 per cent increases Condominium Home Owners Association of B.C. (CHOA) executive director Tony Gioventu has heard of.

“I think what we’ve seen is a correction in the market,” Gioventu said. “It’s not like it’s exponentially incorrect, but it’s just that it’s happened all at once.”

CHOA reviewed B.C. insurance premiums dating back to the 1980s and 1990s and found that they are not far off from where they were before industry players began adjusting their rates this past year. Gioventu called it a “bit of a revelation.”

At that rate, insuring a high-risk property with a replacement value exceeding half a billion dollars — which exists in B.C. — might cost $1.1 million annually. In the event of a total loss, an insurer would be paying out roughly 455 times what it collected in premiums in a given year, meaning — all else equal — the insurer would have had to collect 455 years of insurance premiums to break even on the claim.

Gioventu believes market competition is partly responsible for keeping insurance premiums relatively stagnant over the past several years, despite the fact that buildings have kept aging while property values have increased and risk has grown.

The number of residential strata claims and what they cost has also risen. According to insurance broker BFL Canada, one in three stratas will submit a claim this year. Average losses now cost more than $50,000, and 54 per cent of losses claimed are worth more than $100,000.

Across the country, construction and repair costs have risen. Canadian insurers are getting squeezed by higher rates of reinsurance, which is insurance that insurers buy. Firms are often part of global companies that are dealing with more claims, more catastrophes and more risk of major catastrophic events.

In 2018, Canadian property and casualty underwriters posted their largest loss in a decade. Their return on equity also hit two per cent — the lowest level on record. The average return has fluctuated around 10.5 per cent since 1975, according to IBC.

“It’s really a case of supply and demand, and the insurers that are left standing… are now being overwhelmed with too much demand pressure.”

In soft market conditions, a broker such as BFL Canada might work regularly with a dozen insurance companies to meet the insurance needs of strata corporations in the Greater Vancouver market. If the market is stable, it may not be difficult to find insurance on relatively preferable terms from within that panel of insurers.

But the number of insurance providers willing to protect residential strata properties in the Lower Mainland has been shrinking over the last 12 to 18 months, and those left standing have become more selective with the risk they assume and how they price it.

The market has corrected, as Gioventu put it.

McDonnell said BFL Canada has reached out to more than 80 different insurance companies in Canada and abroad to fill the gaps left in the market by departing insurers.

“That replacement support has been very difficult,” McDonnell said, adding the risk that a building may not find a company willing to insure it is legitimate.

Danielle Russell, partner and vice-president with insurance broker CapriCMW, told BIV that, historically, it would take between three and six insurance companies to cover a property, with each provider assuming a slice of a property’s risk. In current market conditions, she said, that number can often be well in excess of 10.

“We’re seeing a dramatic increase in the number of insurance companies that you would need to provide insurance now, versus two years ago.”

This is one of the markers of a “hard” insurance market, which is characterized by a reduction in available insurance capacity, increased risk scrutiny, higher premiums and higher deductibles.

Markets across the country are being hit with premium increases, but McDonnell said insurers are choking on B.C.’s earthquake risk profile, which comes with higher reinsurance rates and has caused premiums in Canada’s westernmost province to rise faster.

“We have all these market forces that are coming around at the same time that the companies are reviewing their risk appetite and taking a lot closer look at their underwriting requirements,” said Rob de Pruis, IBC’s director of consumer and industry relations in Western Canada.

Across the board, industry told BIV that increases in the number and severity of claims are a major force behind the sometimes shocking jump in premiums stratas face.

Earlier this year, IBC struck a national task force to engage stakeholders across the country on the issue. After a meeting in Edmonton, the bureau released policy recommendations for addressing the affordability of strata insurance, including mandatory education for strata councils, building code amendments and a monetary cap on the amount a strata corporation can attempt to recover from an individual strata lot owner in the event of a loss.

The IBC task force is scheduled to hold a meeting in Vancouver on March 17. CHOA is one of the stakeholders participating.

Gioventu said maintaining and repairing buildings is the best way for strata councils to reduce their risk and mitigate premium increases. He urged strata corporations to complete depreciation reports, which identify building deficiencies and allow strata councils to plan for dealing with them before they create insurance issues. At present, strata corporations can waive the legal requirement to complete such a report.

Homeowners should ensure their suites are maintained too, he explained, especially in connection with water issues, damage from which could result in an owner paying the building’s deductible. That, he said, could bankrupt some people.

Additionally, he believes regulatory tweaks to balance what strata corporations and individual owners are each responsible for covering could help spread liability across more individuals and individual insurance policies, thereby lowering premiums paid by the strata as a whole.

According to Gioventu, stratas have been finding out the day before their insurance expires that their premiums are set to skyrocket.

Gioventu added that a proposal to create a public insurer warrants some caution.

“We could go down the rabbit hole of a co-operative-style provincial insurer to discover that the insurance costs are in fact higher.”

– With files from Jeremy Hainsworth, jhainsworth@glaciermedia.ca