The pews were full at the Brighouse United Church in Richmond Wednesday night. But it wasn’t a higher power that drew the crowds — rather, higher housing prices in Metro Vancouver.
May 10, 2018 3:52 PM By: Alexander Kurial 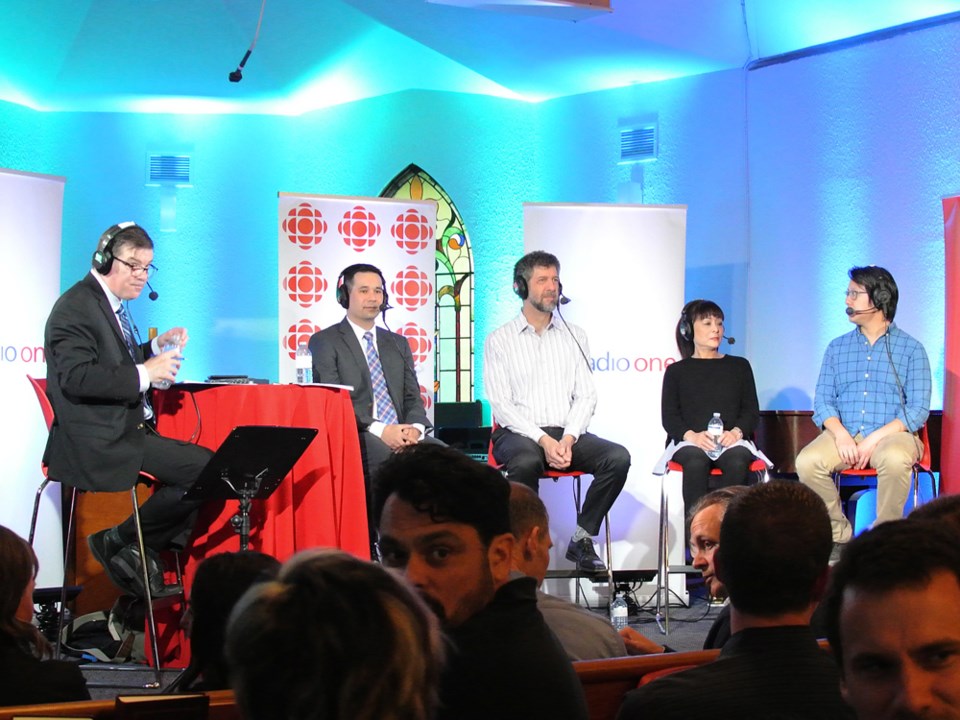 The pews were full at the Brighouse United Church in Richmond Wednesday night. But it wasn’t a higher power that drew the crowds — rather, higher housing prices in Metro Vancouver.

The CBC Vancouver-hosted public forum focused on the state of housing in Vancouver, including how we got here and what can be done to alleviate the problem. The event was moderated by Early Edition host Stephen Quinn, who recently launched the new podcast “SOLD!” which explores housing in Vancouver.

A panel of realtors, housing advocates, professors and other experts shared their views and answered questions from the packed house. At the heart of the debate was the question, “Is housing an investment or a human right?”

While CBC financial columnist Mark Ting and local realtor Patsy Hui argued housing was an investment first and foremost, Justin Fung, spokesperson for the advocacy group Housing Action for Local Taxpayers, took the opposite stance. He called for a national housing strategy to address the problem, and referenced Maslow’s hierarchy of needs to explain that shelter was key to the happiness of a person and society.

Fung also credited the media for their work in bringing many of the issues, including “shadow flipping,” into the public eye. Fung said the self-regulation of the real estate industry had left it up to journalists to investigate them, and argued more official oversight was necessary.

He warned, however, that even the media was not immune to being influenced by such a powerful industry. “We talked a lot today about the real estate industry and how much of the economy it makes up,” said Fung after the forum. “As a result, you look at how much of that investment is ad revenue for local newspapers here, and I think it’s really important that papers are able to ensure that the influence from that money isn’t influencing how they work and operate.”

The idea of happiness resurfaced during the final panel of the evening. Josh Gordon, a professor at the SFU School of Public Policy, cited a 2015 Stats Canada report that showed Vancouver residents had the lowest self-satisfaction rates of all urban areas in Canada. Gordon blamed this on the debt and stress people experience as a result of not being able to afford a home, and said in addition to the unhappiness it has led to “angry, divisive politics.”

Gordon proposed that the housing market must be more directly tied to the labour market going forward, so people living and working in Vancouver can compete with foreign buyers. He said the NDP’s new speculation tax would help achieve this goal.

Matt Pitcairn, president and CEO of the Richmond Chamber of Commerce, stressed that municipalities are also affected by the lack of affordable housing.

“Housing unaffordability is a major challenge,” Pitcairn said. “About 65 per cent of our members reported that it was causing massive issues as far as retention and recruitment of new employees.”

Pitcairn added the business community must work with all levels of government to increase the supply of homes that will attract people to Richmond and other cities facing similar problems.

Other NDP housing tax initiatives came up throughout the evening, including a decision to levy a new property tax on homes valued over $3 million. An Angus Reid poll released this week showed provincial support for this initiative — along with other tax changes — was high, although the new tax has attracted protests by some homeowners.

UBC Sauder School of Business professor Tom Davidoff pointed out that the property tax increase was actually quite small, but due to Vancouver having some of the lowest property taxes of any major city in North America, any attempt to bring things more in line with other urban centres was going to appear drastic.

Tung Chan, former CEO of the United Chinese Community Enrichment Services Society and Vancouver city councillor from 1990-93, was the harshest critic of the NDP’s new policies. He described the new taxes as being “totally off the mark,” calling out the speculation tax and city imposed empty homes tax specifically as sounding good on paper but doing nothing to create affordable housing.

Chan said zoning policy, particularly utilizing land for more residential properties, was the answer to the problem. After the forum, he proposed municipalities form Crown Corporations, then obtain city lands and use them to build either rent-to-own or affordable housing.

“The bureaucrats dictate how long that [building] process is going to be. Can you imagine, by the time you want to build a house or a complex, it would take you seven years. You just can’t have that,” Chan said.

He also had strong words for the Canadian Mortgage and Housing Corporation. “CMHC, their mandate is to provide affordable housing for people. What have they done in terms of providing or building housing?” he said.

One thing everyone on the panels could agree on was that starring role housing will play in October’s municipal elections. “It will be the issue,” said Jon Stovell, president of development company Reliance Properties.

Gordon agreed, going so far as to say Mayor Gregor Robertson was not running again because of his housing record during his tenure.