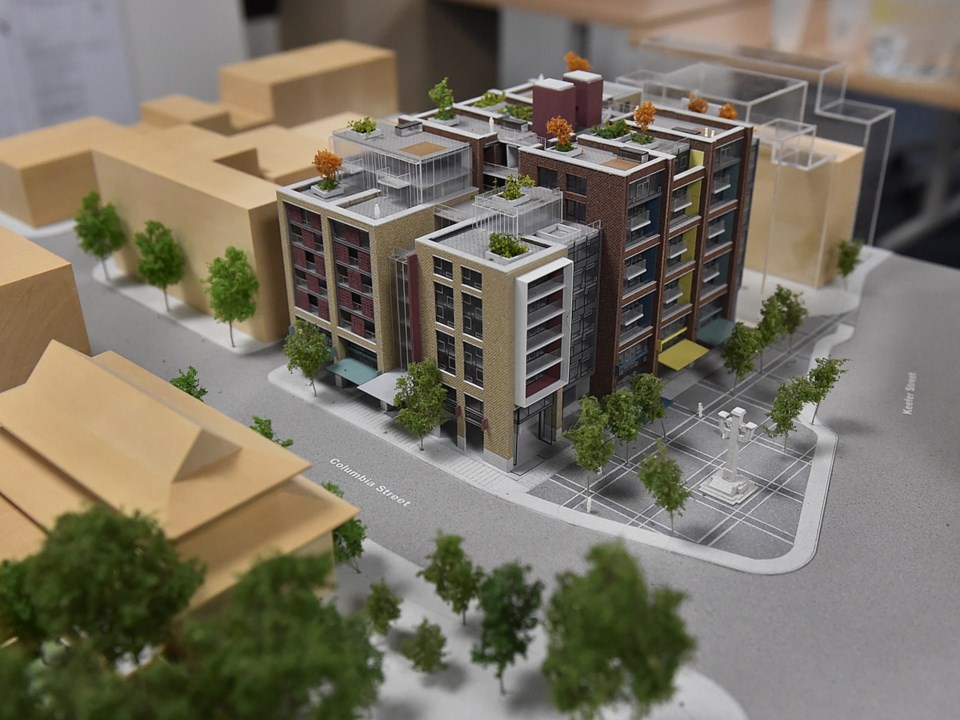 Beedie Development Group’s ongoing battle to build a condo building in Chinatown took another blow Friday after the board of variance scrapped its March 2 date for a hearing.

The move comes after both city council and the city’s development permit board last year rejected Beedie’s proposal for 105 Keefer St. Beedie has revised its project at least five times in four years.

On Friday, lawyers acting on behalf of the city’s board of variance contacted Beedie (Keefer Street) Holdings Ltd. in a letter and said the company’s appeal does not qualify to be heard by the board.

The letter from firm Young Anderson came four days before organizers fighting to kill the project were to protest Monday in front of Beedie’s offices on West Georgia Street.

“We write to advise that the board of variance considers that it does not have jurisdiction to hear and determine this appeal,” said the letter authored by Alyssa Bradley of Young Anderson.

In November, the development permit board voted 2-1 to reject Beedie’s proposal for a nine-storey building. Board members Gil Kelley, the city’s chief planner, and city engineer Jerry Dobrovolny rejected the application for reasons based primarily on design.

In providing reasons for their decisions, Dobrovolny and Kelley also referred to the widespread opposition to Beedie's project from hundreds of people who spoke at the public hearings in May and June, and more than 100 who spoke to the board.

A few days later, Houtan Rafii, executive vice-president of Beedie Living, lashed out at the development permit board, saying “select members” ignored recommendations from planning staff and others.

“We are extremely disappointed that the institutions mandated to provide regulatory and policy framework — the City of Vancouver planning staff and the council-endorsed and appointed urban design panel and development permit board advisory panel — have been undermined and their unanimous support for 105 Keefer ignored by select members of the development permit board,” Rafii wrote Nov. 7. “Like many people, we are uncertain what this unprecedented decision will mean for these civic institutions.”

It’s not clear whether Beedie has any further recourse in its bid to build the project. A spokesperson for Beedie told the Courier Friday the company had just received the letter and was reviewing it. Beedie would provide a statement at a later date, the spokesperson said.

The board’s decision was welcomed on Twitter by various opponents to Beedie’s proposal, including Kevin Huang who tweeted: “Good news to start the weekend. Organizers, take a good break please.” Longtime housing advocate Jean Swanson tweeted: “Congrats, again, to all the #ChinatownYVR organizers who have fought this for years!”

Also, the building wouldn’t preserve the heritage and cultural character of Chinatown, and there wasn’t enough social housing in the plan, they said.

Beedie then revised its 12-storey proposal to nine storeys in an attempt to get approval from the development permit board. It got to go before the board because it reduced the height of its original 12-storey proposal at 118 feet to 90 feet, which is allowed under the city’s current policies and doesn’t require a rezoning or public hearing.

The original proposal included 25 apartments of social housing for seniors, although only three would be available at welfare rates. Beedie only promised the 25 units after negotiating a deal with B.C. Housing to pay for it. That deal did not apply to the revised proposal, which called for 111 market condo units.