High-rise on east side of Granville Bridge designed to balance and echo Vancouver House
May 16, 2018 11:16 AM By: Joannah Connolly 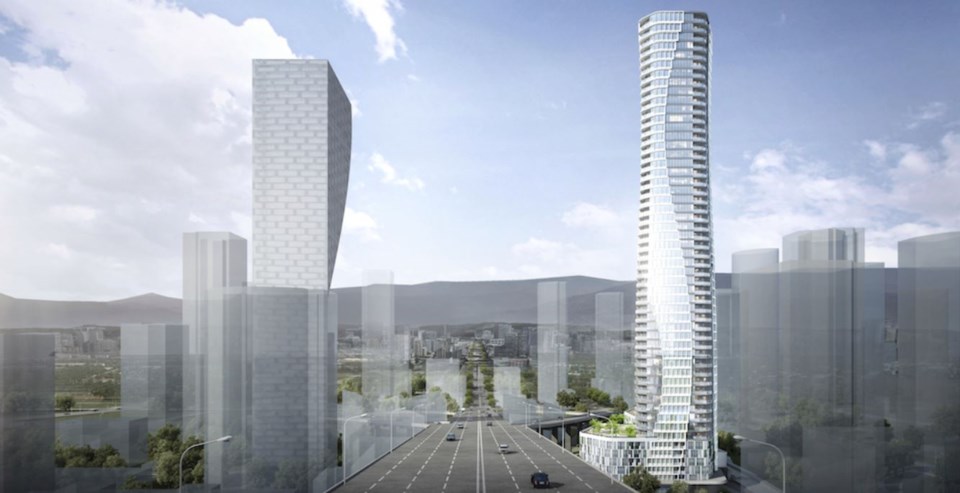 601 Beach Crescent is proposed to be even taller than its iconic neighbour, Vancouver House. Images: JYOM Architecture/Pinnacle International

Designs for a 52-storey tower opposite the under-construction Vancouver House on the other side of the Granville Bridge entry into downtown were revealed this week.

Developer Pinnacle International held a pre-application open house May 14 to unveil the plans for 601 Beach Crescent, which at 535 feet is even taller than Vancouver House’s 507 feet.

The design, by Chinese architectural firm JYOM Architecture with local firm GBL Architects, makes clear reference to the building's iconic neighbour, with fluid lines on its façade that echo the twist in the tower opposite.

The site on the east side of Granville Bridge was slated for a tall tower as part of the City’s “Vancouver Views” policy, which proposed the Granville Bridge Gateway with high-rises on each side of the entry into downtown.

Part of the 2016 deal for the site between Pinnacle International and the City was that Pinnacle would include 152 affordable, non-market units in the new building. The rest of the homes, approximately 300 in total, will be market housing units.

The plan also proposes a podium with an 18,000-square-foot retail space, second-floor amenities for the affordable housing residents, and extensive amenities with a pool on the podium rooftop for the market unit residents.

Check out the renderings released by Pinnacle International, below.