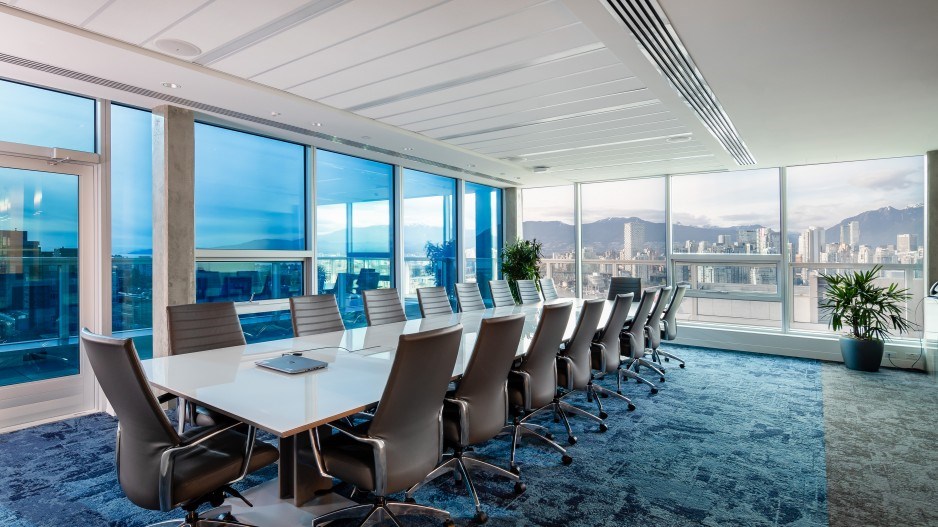 Electrically charged View Smart windows in a new Vancouver office tower darken in reaction to sunlight or can be tinted with the use of a mobile app. Photo submitted

The triple-A class, 107,000-square-foot-tower by BlueSky Properties has had View Smart windows installed on 10 floors of the 11-storey tower. iA Financial Group, a partner in the project, has leased all of the office space. The bottom floor is leased to retail tenants.

Developed in Silicon Valley with backing from investors including Softbank and NZ SuperFund, the View Inc. smart exterior windows remove the need for blinds or screen while providing security since the glass can be also be darkened with an app, according to View customer success manager Linh Nguyen.

The double-pane windows are programmed to automatically track the sun and change the shading in response. While the windows reduce a building’s energy use by an estimated 20 per cent compared to conventional glazing, View is promoting the wellness aspects of the technology.

“There is more of a focus now on the health and well-being and the productivity of the occupants,” said Guthrie Cox, president, Canada for View, which has offices in Vancouver, Toronto and Calgary.

Cox pointed to a recent survey by the Harvard Business Review that showed 78 per cent of office employees believe access to natural light and views improves their well-being and 70 cent report improved work performance when daylight is available.

View’s electrochromic windows use a single-line, low-voltage electrical current that allows a micro-thin layer of metal oxide to reflect or absorb light, tinting or untinting the windows. Cox said that 1,800 square feet of View windows draw the same power as a 60-watt light bulb, even when tinting.

“It is like giant sunglasses,” Nguyen said, who estimated 400 buildings in North America have had the View Smart glazing installed, with another 150 in progress.

View’s Mississippi manufacturing plant makes the windows and the controller system. The software and apps, which can control the window tint from a smartphone or computer, are developed at View’s headquarters in Milpitas. California.

The windows can help qualify a building to up to 13 LEED (Leadership in Energy and Environmental Design) credits, according to View.

The typical net fully installed cost of the View smart glass is $130 per square foot in the curtain wall applications of office buildings, Guthrie said.

“This adds only one per cent to the building cost, and often less, because of reduction and savings in HVAC [heating, ventilation and air conditioning], annual operating costs, elimination of blinds, and often, elimination of exterior features such as overhangs,” he said.

BlueSky’s office tower is among the first major commercial buildings equipped with the View glazing throughout. To date, View windows have been installed mostly on public buildings, including top-floor skylights at the Vancouver central public library, but it is also being used in a number of residential condo towers across North America.

Nguyen added that Vancouver appears a natural fit for the high-performance glazing.

“Vancouver is a city of glass and views,” she said.