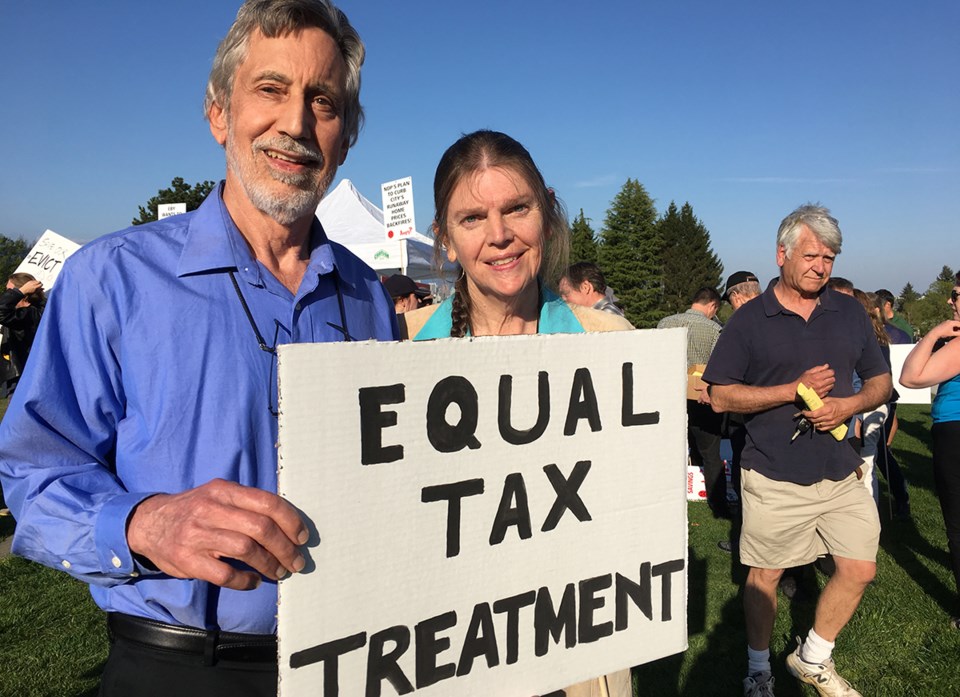 David Tha and Paula Maisonville, who spoke at Tuesday night’s tax protest at Trimble Park, are cutting back on their household expenses to try to afford the additional $12,000 in taxes they’ll have to pay for their Point Grey home.Martha Perkins

Only 40 metres from the house where he was born, and where his sister still lives, it’s the place where they built their own life together with their daughter.

Apart from a few coats of paint, they haven’t done any alterations to the house, which was built in 1927. Today, however, its assessed value is $6.75 million and they say they will have to pay an additional $12,000 in property taxes — on top of the $15,000 a year they are currently paying — as part of the NDP government’s new surtax for school spending.

It’s an overnight 79 per cent increase in property taxes and $12,000 they don’t have. Both retired, their only income is their pensions. He taught economics at Langara College for 35 years; she taught psychiatric nursing.

They’ve disconnected their landline and signed up for an internet-based phone service. Tha, who is 72, is trying to figure out a way to attach an antenna to their house so they can cut cable and yet still watch television. They’re eating less meat to cut down on their grocery bills and foregoing travel plans, all to try to save the money that will go towards their higher tax bill.

They’re also speaking out. On Tuesday night, they were among the speakers at the Trimble Park rally against the annual tax increase on houses worth more than $3 million.

“It’s not an investment to us; it’s our home,” Tha said in an interview afterwards. “We have no intention of moving. I’d rather go back to work.”

He knows that people think they’re rich because their house is worth so much. However, their income is not in any way paired with the house’s value so whether it’s worth $6 million or $600,000, it’s all the same to them. It’s not cash in the bank or any indication of their ability to pay more in taxes, unlike taxes that are based on income. The only way they can realize the house’s value is to sell it.

Their MLA David Eby, who is also the province’s Attorney General, has said he supports the tax because people older than 55 are given the option of deferring the tax until the house is sold.

“Deferring the taxes is simply deferring the injustice,” Tha says. “It’s not a solution; it diminishes the immediacy of the problem and postpones it to the future…. It’s a specious argument that clouds the issue of whether the tax is right or wrong to begin with.”

If the couple did choose to defer the taxes, the provincial government covers the shortfall and subsidizes the interest rate on the “loan.”  That puts the burden on all B.C. residents,  says Tha, who remembers a time when rich people would defer taxes in order to be able to invest the money elsewhere, something he’s against in principle.

“The government would be paying the taxes on our behalf. I don’t want, nor do I need, their welfare. Maybe it’s old-fashioned but I think assistance should go to the needy.”

They also don’t want to put the burden on their daughter, a nurse to whom they plan to bequeath the house. Not only will she have to pay the deferred taxes but if the house continues to increase five per cent a year in value, and the surtax remains in place, Tha calculates the taxes will be $67,000 a year in 15 years, well beyond her ability to pay.

Even if they did sell because they couldn’t afford the taxes, Tha says, who would buy it? It won’t be a middle-class family, like they were 30 years ago when they bought the house. Most working couples couldn’t afford it in a neighbourhood where many houses sit vacant, their owners living out of the country.

And where would they move? Prices are expensive everywhere in the city, he says. Their daughter lives with them so she’d have to find a place to live, too.

He compares it to having a problem with his leg and being told one solution is to chop it off.

‘It’s not that we don’t want to see our taxes go to good causes but [the government] has to look at other ways of doing that,” he says. “They have to get big money in a fair way.”

His wife says that during her years as a psychiatric nurse, “I’ve given a lot to support the marginalized and vulnerable. I believe in doing what’s right for people and I feel like I’m being screwed.”

When Eby first planned an open house three weeks ago, he postponed it after all 300 seats were scooped up in 24 hours. He arranged the May 1 town hall at the same location but cancelled because he felt his staff and volunteers would not be safe after Liberal leader Andrew Wilkinson and real estate agents encouraged people to show up even though there were no seats available. (There was also a full-page ad in the April 26 Courier encouraging people to attend, sponsored by Sutton Group West Coast Realty in Kerrisdale.)

Tha and Maisonville say that Eby, knowing that more people wanted to attend than there were seats available at St. James Square, should have moved the meeting to a location with more room. They’ve also written to Green Party leader Andrew Weaver to act against the tax change.

“There are certain milestones in life — graduating from school, getting married, having children, buying a house and paying off your house,” Tha told the Courier.  “With this tax, one of those milestones has been destroyed. I find that sad and feel that deferring the tax as a solution to the problem is treating people in an unjust, unfair manner. This tax is an attempt to steal from my equity and also my dignity. My wife and I have collectively worked 70 years to be debt-free. Their solution is to put us back into debt.”