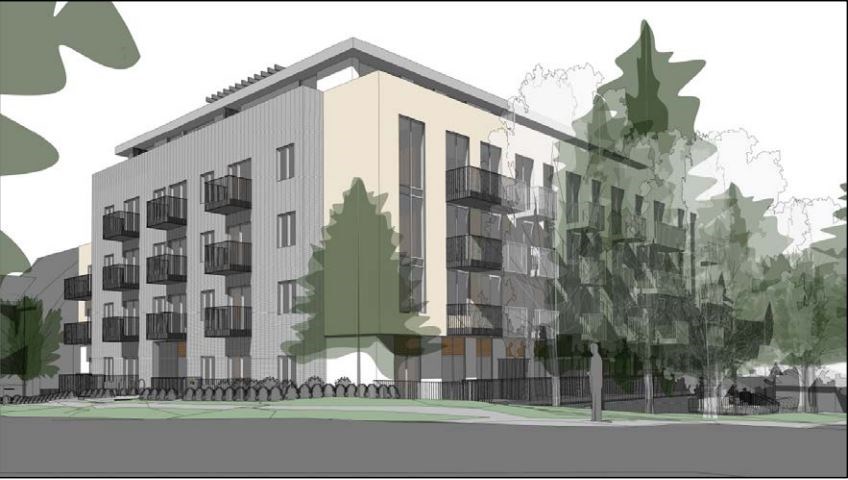 As decision day nears for a controversial rezoning proposal on Larch Street, a Kitsilano resident group is calling on Mayor Kennedy Stewart and NPA Coun. Melissa De Genova recuse themselves from the debate and vote.

Jameson Development has applied to build a five-storey rental building at 1805 Larch St. at West Second Avenue, which includes 63 rental suites — 13 of which would be geared towards moderate income households earning between $30,000 and $80,000.

The neighbourhood group, which represents some residents within a two-block radius of the site, also points to a May 30 speech by Stewart at the Urban Development Institute in which he mentioned the Larch project, and a Jan. 10 lunch meeting De Genova had with one of the company’s principals, shortly before the rezoning application was filed.

In a letter to Mayor Stewart dated Dec. 5, Stuart Rush, a member of the resident group, said due to these points, “it is evident that you have no intention of entertaining a denial or modification of the proposal.”

“You received financial support from the developers for a development that you singled out for public support. You are out there promoting the project. It is clear you will not change your point of view and you have an interest in approving the rezoning and the development proceeding,” Rush writes.

Rush cites article 4.2 in the city’s code of conduct, which defines a conflict as “when an individual is, or could be, influenced, or appear to be influenced, by a personal interest, financial (pecuniary) or otherwise, when carrying out their public duty. Personal interest can include direct or indirect pecuniary interest, bias, pre-judgment, close mindedness or undue influence.”

When contacted by the Courier, Alvin Singh, the mayor’s director of communications, said the issue of campaign donations has been raised numerous times through various administrations.

“… And the answer has always been the same: a general donation does not amount to a conflict, real or perceived, around specific development applications,” Singh told the Courier in an email.

“In terms of his remarks during speeches, the Mayor has used Larch and other projects as examples of the MIRHPP policy and hasn't commented on the merits of the actual development.”

“In the event the Mayor or any Councillor spoke in direct support of a proposed project after it was referred to public hearing, that could lead to a circumstance where they MAY be asked to recuse themselves. To my knowledge however, that has not happened,” he said.

“The Mayor takes his role in the public hearing process very seriously and listens to all the comments from the public, proponent and staff prior to making a final decision and the upcoming project on Larch is no different.”

Coun. De Genova told the Courier she doesn't plan to recuse herself. She said she's always been "very careful" about avoiding conflicts and is proactive about seeking legal opinion to ensure she doesn't violate rules.

"I understand that contributions from individuals, regardless of what industry they work in, are allowed and permitted, and do not reflect a conflict with an individual specifically because a contribution was given to their campaign," she said.

While two other MIRHPP projects, envisioned for Renfrew-Collingwood in East Vancouver, are also going to public hearing Dec. 12, they haven’t produced as much backlash or feedback as the Larch Street rezoning application has generated.

Staff collected 178 written comment sheets at an April open house for 1805 Larch St., while 282 letters, emails, online comment forms and other input was submitted, including letters and material from a May local neighbour meeting. A petition with 352 signatures was also sent to the city.

Supporters indicated they were fine with the proposed height and their comments cited benefits such as housing affordability, the proposed building’s fit with neighbourhood character and walkability.

Many Vancouverites are concerned about the city’s low vacancy rate, which sits at .08 per cent, the scarcity of purpose-built rental housing, the fact much of the existing stock is old and in need of repair, and the general lack of affordable rental housing across the city.

Supporters of some of the city’s rental incentive programs also insist the opinions of current residents of a neighbourhood shouldn’t be the only ones taken into consideration, that rental housing should be allowed and built in all areas of the city, and that city council needs to support construction of rental housing given the affordability crisis.

Opponents of the Larch project, meanwhile, question its fit with neighbourhood character, say the building is too high, and have called for the project to be aligned with the future city-wide plan.

Rush also questions why the project is being described as a five-storey building, when it reads as six storeys from the lane, and also features an upper level which he maintains amounts to another storey. He also noted 50 of the 63 units will be a market rental rates, which are too high for many residents.

Rush said his group would accept a four-storey building if all the units were affordable.

“We say it's just too big and too dense and too bulky for that small size of a lot,” he said.

Note: This story has been updated with comments from Coun. Melissa De Genova since first posted.