Report reveals average amount lost per household in individual municipalities, and percentage of equity lost
May 21, 2019 8:01 AM By: Joannah Connolly 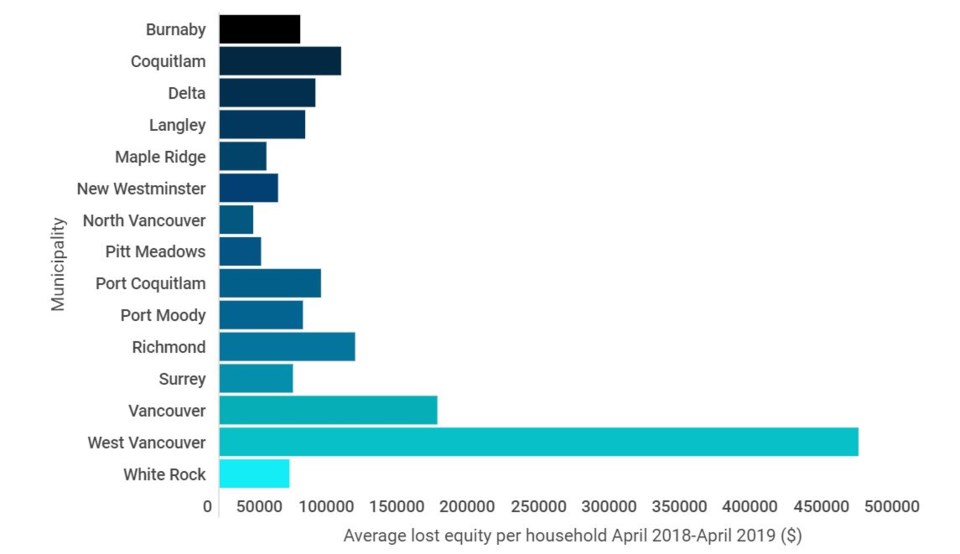 While falling home prices may be good news for those trying to get into the real estate market, they’re certainly not welcomed by the 63.7 per cent of Metro Vancouver adults who own their home.

A study released May 21 found that in the past year, from April 2018 to April 2019, $89.2 billion has been wiped off the total value of residential real estate across the Lower Mainland.

The study also analyzed individual municipalities to look at the average dollar amount of equity lost per household in each area, and the median percentage of equity lost.

Vancouver, which has the highest number of dwellings, saw a nearly 13 per cent decrease, for a total of $43.6 billion.

West Vancouver saw the highest percentage decrease, at 14.68 per cent, and the highest average dollar amount lost per household, at $451,385.

However, almost half of the nearly $90 billion in losses are outside Vancouver and West Vancouver.

The analysis was carried out by Paul Sullivan, senior partner at Burgess, Cawley, Sullivan & Associates Ltd., a commercial real estate and property tax appraisal firm. It was carried out on behalf of STEPUP, a group that advocates for the end of what it considers to be unfair and politically motivated taxation policy.

“While the government’s goal may indeed be to bottom out the housing market in an attempt to somehow address the complex issue of affordability, they are simply removing billions of dollars from the B.C. economy, to everyone’s detriment,” said Sullivan.

STEPUP is laying the blame for the lost equity at the provincial government’s door, saying that real estate taxes such as the school tax on $3m-plus homes and the speculation tax have caused the reduction in home values. It argued that this could have a devastating impact on those homeowners who relied on that equity for future retirement income.

The group said in a news release, “Homeowners rely on the equity in their homes, usually their biggest investment, to fund things like home renovations, post-secondary education, senior care costs, and retirement. While MLAs, academics, and public sector workers rely on secure, taxpayer-funded pension plans, many British Columbians rely on the equity in their home to get them through retirement, and to leave something for their children. This equity loss leaves many seniors, who have tried to plan carefully, in jeopardy.”

It added, “The impact on the economy and jobs will likewise be devastating. A recent BC Real Estate Association analysis confirms that a 10 per cent equity loss translates to 26,000 jobs lost, $1.8B in lost retail sales, plus lost tax revenues to government.”

Many homeowners, especially those affected by the school tax on $3 million-plus homes, have protested against the recent slew of real estate taxation.

“We have been taxed out of our home,” said Point Grey resident Ric Pow. “My wife and I are lifelong residents of Vancouver, and have owned and lived in Point Grey for 33 years. We have been careful with our retirement funds, and own our home mortgage-free, which has been a cornerstone of our retirement plan. Our home, along with most others in David Eby’s riding, has lost 25 per cent of its value since the NDP took power.”

However, not everybody agrees that homeowners are necessarily entitled to the equity they have gained from the real estate price rises over the past few years – not even some realtors. Vancouver agent Barry Magee told Glacier Media, “For someone who thinks they are entitled to 20 per cent year over year equity increases, reality will soon set in that they are not real estate geniuses, they were accidental millionaires. If you didn’t cash in your lottery ticket at the right time, or bought your ticket at the wrong time, you’ve got no one to blame but yourself.”

Check out the home equity lost in your area in the infographic below.