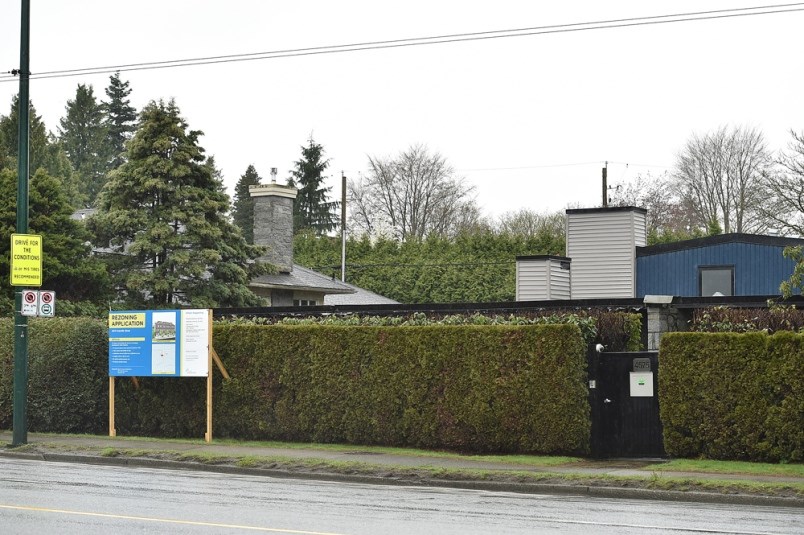 The property owners behind the failed rezoning application for a townhouse development at 4575 Granville St. now plan to build a large home after council voted 7-4 against their proposal.

The Vancouver Hospice Society opposed the rezoning application. Its facility at 4615 Granville St. is next door to the site.

Designed by Stuart Howard Architects, the development would have featured two buildings — a two-and-a-half storey one and another that was three-and-a-half storeys. Considered under the city’s Affordable Housing Choices and Interim Rezoning Policy, the project would have produced 21 market rental townhouses.

Jagmohan and Kamlesh Pabla bought the site eight years ago. They live on the property in a two-storey house built in 1953 with their son Gurveer Pabla, 35, his wife, their two small children, and Gurveer’s 103-year-old grandmother. We spoke to Gurveer about council’s decision against the rezoning application and his family’s current plans for the land.

Yeah, we actually purchased it to build a house. They already made all the drawings before. It was a large house. I talked them out of it.  As soon as I saw this [Affordable Housing Choices and Interim Rezoning] policy, I told them it'd probably be better for them to just make rentals and actually live in one of the townhomes in the back. They agreed to it, and it's been a long process. Now, they're kind of confused because their original plan was to build a house.

Are they living on the property now?
Yeah, we all live there.

You’ve had a day and a half for the decision to sink in. How do you feel about it today?
I thought we followed all the rules. Clearly, the hospice has stated over and over again that they want to purchase the land and build on it themselves. So I don't understand how that works. They're stating that they have issues with construction and there’s still going to be construction there.

Do you think that was a conflict with the hospice stating they want to buy the land while opposing your project?

Yeah, exactly. They clearly stated that during the public hearings.

Nonetheless, were you surprised by the decision? Did you have hope that it would be approved or what were you thinking that night?
We did [think it would be approved] because we followed everything that staff told us to do. We never asked any questions. We just said, OK. We agreed to everything they said. We didn't oppose anything. Anything they asked us to do, we did.

When it became clear the councillors were voting against the application, or at least the majority were, what were you thinking?
I’ve talked to my parents about it, and now they’ve told the architect to go ahead with a 12,000-square-foot house. Like I was saying earlier, we bought this land to build a house to live. The plan was to just make some rentals and live in the house as well. So if we're not going to get the rentals, there's no point. We might as well just build the house.

Some councillors suggested they'd like to see a revamped proposal. Is that something you'd be willing to do at this point?
We would, but I don't want to take the risk again. We've already been living in the house since 2011. What's the point of me going again and waiting and then something else gets changed. That’s just going take longer for us to build a house if we need to build a house.
If it's possible, that's something we were willing to look at, but I don't want to do this thing all over again because it costs a lot of money. I think the city fee alone was over $50,000.

Do you know how much you spent in total on the whole process?

Would you consider at all selling the property to the hospice at this point or is that a no-go?
That’s a no-go.

Could you have done the project as a two-storey development? Was that ever a consideration and do you think that would have satisfied the hospice?
With this policy, we were allowed to build a four-storey apartment building. We decided not to do that because one of [the hospice’s] concerns was they didn't want to lose their view where the eating area is. So then we split up the building into two separate buildings. Another reason we did that was because, looking around, there were no stacked townhouses for rent and we thought it'd be a better project because they’re harder to find — family townhomes.

One of the reasons some councillors voted against the application was because they said units wouldn't be affordable. What's your reaction to that?
We used the rental rates set out by the city for our pro forma. So it's the city that set the DCL [development cost levy] waiver rates, and that's what we used. The reason we didn't take the DCL waiver is because, [for] townhomes, I think they had a cap of unit sizes. They had to be about 1,000 square feet. I don't think a 1,000 square foot townhouse would be livable. You need at least 11, 12, 1,300 square feet. So we didn't get the waiver but we did use those rents. So those rents were set out by the City of Vancouver.
We did this project because we were going to live there. They're not luxury rentals. It’s West Side rents the city set out.

Do you think the project would have worked with the hospice next to it?
I think it would. If they're saying that they want to build housing next door, senior housing, I'm not sure what the difference would be with rental housing.

Aside from saying the units wouldn’t be affordable, Coun. Jean Swanson's other criticism included that you would get a huge increase in the value of the property if it was upzoned, and you weren't contributing enough in terms of community amenity contributions. What's your reaction to Swanson's criticism?

Like I said before, we're not building this and selling it. We're living there. You know the property value, it's pretty high right now, too. How much more could it possibly go up? Plus, we weren't taking the DCL waiver. I think the permit fees were over $300,000 and they were asking us to update the sewer in the area, which was another three or $400,000. So I think we were contributing.

What message do you think council's decision sends to other people who might want to develop property?
I don't think anybody is going to be buying any property on Granville to rezone anymore because it’s a long process and you’re not guaranteed. It's a lot of time and money. I've been reading the newspapers and it seems like a lot of developers are getting scared.

Would you do anything differently?

I don't think I would want to purchase any property next to a hospice.

Is there anything you'd want to say to councillors who voted against the project?

No, I don't think I want to say anything to them. I think it's clear [that] a lot of people are upset about this because I been reading it in the papers.

How do your parents feel about the whole thing?
They haven't really said much. They just told me to tell the architect to start doing the drawings for the house. I guess we'll see what happens. I haven't talked to the architect. I talked to him yesterday, so we'll see what he says. He doesn't want to give up on it yet, but I just don't want to go through the process again.

This interview has been condensed and edited for length and clarity.