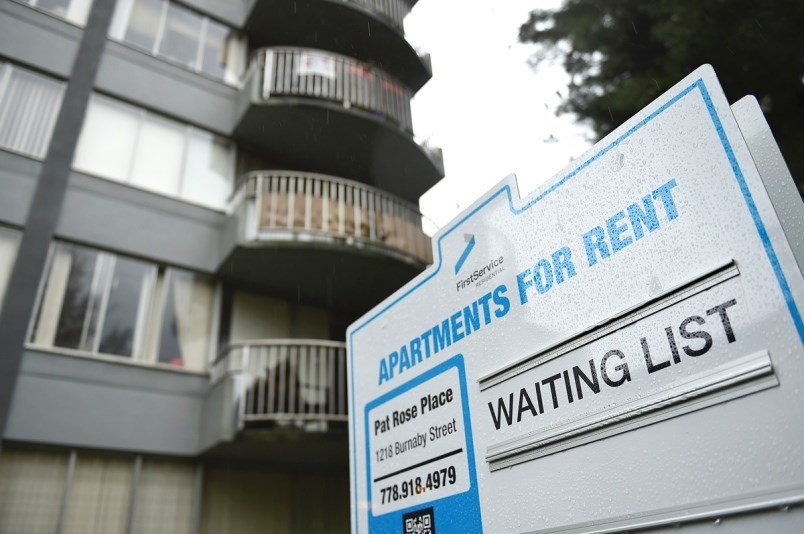 The B.C. government announced Wednesday that it is cutting the allowable rent increase for 2019 by two per cent to 2.5 per cent. Photo Dan Toulgoet

Three weeks after announcing the 4.5 per cent rental increase for 2019, and just two days after the rental housing task force recommended limiting increases to the rate of inflation, the B.C. government Wednesday announced that it is cutting next year’s allowable rent increase to 2.5 per cent.

“It’s simply not sustainable for renters, many of whom are on fixed incomes, to see their rent increase by more than inflation each and every year,” said Premier John Horgan. “We have to eliminate the risk of such huge increases to renters.”

On Sept. 7, the government announced that, based on the consumer price index and the formula used for rent increases, the maximum annual allowable rent increase for 2019 would be 4.5 per cent. The formula, which has been in place since 2004, allows for rent increases equal to the rate of inflation plus two per cent.

However, on Monday the rental housing task force announced its recommendation to change the formula and tie the annual allowable rent increase to the rate of inflation only. The recommendations also included a stipulation that allows landlords to apply for an additional increase on top of the inflation rate, but they would have to prove that the new formula would not cover maintenance and other costs.

On Wednesday Horgan and housing minister Selina Robinson announced that the government is adopting the task force’s recommendations.

“We have to eliminate the risk of such huge increases for renters,” Horgan said. “Our new approach strikes a balance between giving relief to renters while encouraging people to maintain their rental properties.”

David Hutniak, CEO of LandlordBC, said Monday a decrease in the allowable rent increase presents several problems, including the cost and hassle for a landlord to apply for an additional rent increase and the chill it would put on the development industry interested in building purpose-built rental buildings. He added that landlords might also consider taking suites off the market and listing them on home sharing platforms such as Airbnb.

“We can work within the context of the current rent control formula. We’ve had it for a while, we’ve adjusted to it, even though there’s issues to it — whatever, at least there’s a certain predictability to it that we’ve built in to our business models.”

Last week, LandlordBC issued a news release saying that even at 4.5 per cent the rent increase would not be enough to cover costs landlords face in renting one or more suites.

The association conducted a recent analysis of the costs — including property taxes, insurance, repairs and maintenance — to operate a 1970s-era mid-sized building in Metro Vancouver. It found operating costs increased at the building 7.6 per cent per annum between 2009 and 2018, surpassing allowable rent increases.

“We recognize that supply is key to bringing down rental costs in the long term,” Robinson said. “But renters have told us that they are hurting and they need help today.”

She added that new formula eases pressure on renters while also giving landlords the “tools they need to continue to invest in their rental properties.”

Liam McClure, a steering committee member of the Vancouver Tenants’ Union, said Monday the task force’s recommendations are a step in the right direction. But, he said, the union doesn’t believe the task force has gone far enough and should adopt a temporary rent freeze like New York City did between 2015 and 2017.

He added that many landlords have made enormous profits from renters over the years.

“It’s not up to the government to assist landlords in running their business,” he said. “If a landlord doesn’t have a long-term capital plan to account for necessary maintenance, that’s sort of their problem. The tenants shouldn’t be bearing the burden of a landlord’s inability to manage their own enterprise.”

With files from Mike Howell