Changes made by The Panatch Group to its 358-unit condo proposal, including 30 below-market rent-to-own units, have answered affordable housing concerns
Jul 17, 2018 3:52 PM By: Mario Bartel 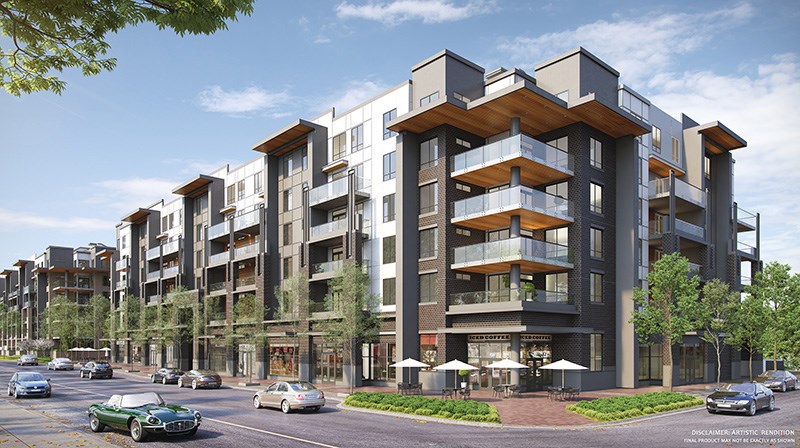 A rendering of the condo development being proposed by the Panatch Group for 50 Electronic Ave. in Port Moody. The project received third reading at the July 10 meeting of Port Moody council.THE PANATCH GROUP

A series of changes made by The Panatch Group to its proposal to build 358 condo units at 50 Electronic Ave. seems to have won the favour of Port Moody council.

At its meeting July 10, council gave third reading to a series of bylaw amendments that would allow the project — two six-storey buildings with 18,000 sq. ft. of commercial space on the ground floor of the western building — to proceed.

When council gave the project first and second readings in June, some councillors expressed reservations about its lack of affordable units, impact to traffic on Murray Street and a lack of community amenities beyond a commitment to a public art project.

But at last week's meeting, several councillors said the developer’s new plan to make 30 units in the project available as rent-to-own, allowing residents of those units to put two years of their below-market rent towards purchasing the units, assuaged their concerns about affordability.

The rent-to-own program has really stepped things up, Coun. Barbara Junker said. “It’s a fantastic way for letting some young people, or even older people, get into the market for the first time.”

Additional community benefits pitched by the company during a presentation at the public hearing include giving the first opportunity to purchase to Port Moody residents and people who work in the city; committing to spend $250,000 towards the city’s reconstruction of the Shoreline Trail and boardwalk; and offering more than 2,500 sq. ft. of the project’s commercial space to the city for programming as a kind of community hub, with office space, pop-up galleries and possibly even a commissary. The city would be able to rent the space for one dollar a year for 10 years.

The path that leads to the pedestrian overpass that crosses the railroad tracks to Moody Centre would also be widened and traffic lights would be installed at the corner of Electronic Avenue and Murray Street.

But some councillors said the project still fell a few tweaks short of a home run.

Coun. Meghan Lahti said she would have preferred a green roof on the buildings rather than decks that can be used as a common amenity by residents.

“We’re behind on this,” she said. “We need to be adopting policies that require green roofs on these buildings.”

Coun. Zoe Royer said while she is thrilled with the developer’s commitment to help rebuild the Shoreline Trail, pitching in to also help with the renovation of the soccer field and softball diamonds at nearby Inlet Field would be “absolutely amazing in terms of a legacy project.”