The plight Vancouver renters face in finding and keeping affordable housing was highlighted by speaker after speaker Nov.
Nov 27, 2018 11:19 PM By: Naoibh O’Connor 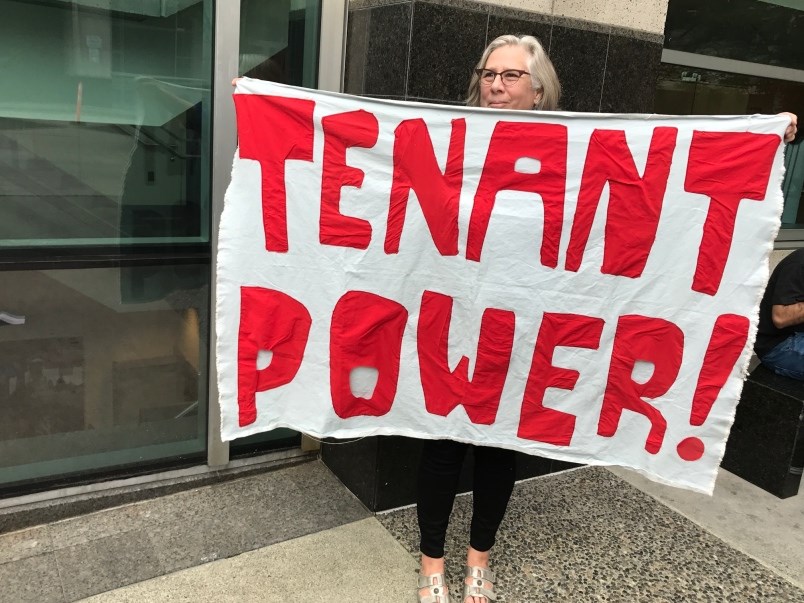 Renters converged on city hall Tuesday night to speak in favour of a motion to protect tenants from renoviction. Photo Naoibh O'Connor

The plight Vancouver renters face in finding and keeping affordable housing was highlighted by speaker after speaker Nov. 27 as dozens urged city council to pass a motion “in its entirety” aimed at protecting tenants from renovictions and aggressive buy-outs.

Calling housing a human right, many said their physical and mental health is being seriously compromised by the affordability crisis, the prospect of being forced out of their homes through renoviction and not being able to find another place to live.

Many of those who spoke Tuesday evening belong to the Vancouver Tenants Union (VTU), which formed in the spring of 2017 and has been increasingly vocal in its advocacy for renters’ rights.

Joey Doyle, a renter and member of the group, told council that an essential element in responding to the housing crisis is to “treat renters like humans.”

He blamed developers and landlords for the crisis and said council faces the fundamental question of whether they favour profit or people.

“For us, it’s a matter of when not if we’ll be displaced,” he said.

The motion, tabled by COPE Coun. Jean Swanson, proposes that the city immediately amend its Relocation and Protection Policy to the extent of its authority under the Vancouver Charter to apply to all forms of accommodation, all areas of the city and to all permits which will result in the temporary or permanent displacement of tenants; and that the city require landlords to offer displaced tenants the opportunity to temporarily move out during renovations without their leases ending or rent increasing.

The motion further proposes that the city come up with methods to keep track of all apartment buildings sold in Vancouver and provide affected tenants with information about their tenancy rights by mail; that the city explore measures, including changes to the Vancouver Charter, if necessary, to regulate and publicly register all tenant buyouts; and that the city call on the province to implement effective vacancy controls for B.C. or give Vancouver the power to regulate maximum rent increases during and between tenancies.

Laura Stannard described Swanson’s motion as “one building block in the strategy to end homelessness in Vancouver.” Stannard said she’d been fighting for housing for 40 years, sometimes as a political activist and sometimes working within the system, but she compared the battle to an endless game of whac-a-mole.

She insisted landlords don’t renovate because they want to improve the situation for existing tenants. She also argued council needs to leave aside issues of jurisdiction.

“Be brave. Your jurisdiction is to do everything to end homelessness,” she said.

Jennifer Efting, who has two young children, rents in Hastings-Sunrise. She lives in a small home and has never been renovicted but said she's still affected by the issue -- most of her now six-year-old daughter’s friends have been forced to move from the neighbourhood or Vancouver.

Efting added that while her rental home is nice, the roof leaks, there’s a rat problem in the basement, the cupboards are falling apart and her family is sometimes asked to cover upkeep costs they shouldn’t have to pay, but they don’t complain because they don’t want to lose their home for fear of not finding another.

Gail Harmer, a senior who rents in the West End, spoke about particular problems faced by her age group for whom she acts as an advocate.

At 76, she’s lived in the same home for the past 15 years but her landlords are getting old and will likely have to sell. Harmer suspects she stands a good chance of being evicted this year if a new owner takes over.

She also cited a small study completed in 2012 that found West End senior-aged tenants stay in their homes for an average of 21-plus years, compared to two-and-a-half-years for younger populations. That puts seniors at a higher risk of being targeted for renovictions by “landlords with a profit motive” because their rents are much lower than shorter-term tenants, she said. Landlords, she added, are also less likely to rent to seniors and seniors have a higher rate of functional illiteracy, meaning it can be more difficult for some to read and understand written material provided by landlords.

David Hendry, an organizer and co-chair of VTU's outreach and advocacy team, came armed with numbers.

He said the team primarily deals with tenants who receive buyout offers or eviction notices and don’t know how to handle them.

This fall, over the course of a week, he said one 60-unit building received buyout offers and two other buildings were put up for sale.

“That’s nearly 200 units of below-market housing put at risk in just one week. Because of this, I’m spending two to three evenings a week in someone else’s apartment building with a whole building of tenants whose housing is at risk,” he said.

“The buildings most at risk are older buildings. The people most at risk are long-term renters. Investors looking to buy buildings will look for those with below-market rents as the greatest opportunity to increase their revenue. They are using the loophole of renovictions to break people’s tenancy agreements so that market rates can be achieved.”

Hendry said 2,500 apartments units were sold as of Oct. 24 in Vancouver alone, according to the Goodman real estate report – 1,500 in the West End and more than 600 in East Vancouver. He said these units are now at risk of the new owners breaking tenancies to improve their investments.

More speakers will be heard when the meeting resumes at 5 p.m., Nov. 28.

Note: A name has been corrected in this story since it was first posted. It's Joey not John Doyle.