Carole James in Vancouver to meet with mayors of affected municipalities to discuss impact of tax on communities; working with housing ministry on various policy decisions
Sep 12, 2019 12:05 PM By: Joannah Connolly 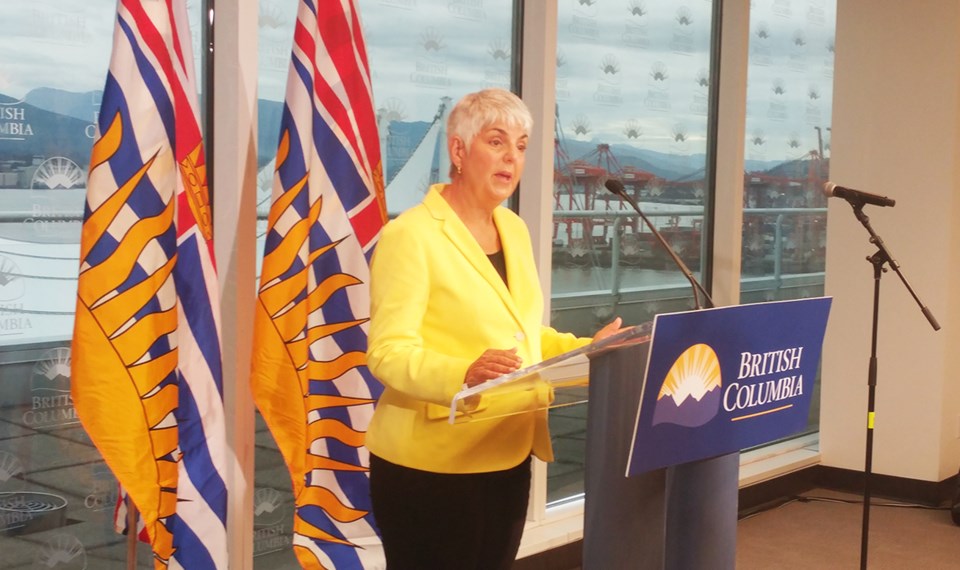 Carole James speaking to media about the speculation tax ahead of her mayoral meeting in Vancouver, September 12, 2019. Photo: Joannah Connolly/Glacier Media

The provincial speculation and vacancy tax (SVT) is “working” — but that doesn’t mean it isn’t open to some amendments, finance minister Carole James told media September 12.

The minister, currently in Vancouver to meet with mayors of affected municipalities to discuss impact of tax on housing in their communities, held a press conference to announce the latest results of the SVT.

James said that the SVT was “working,” with $115 million of revenue collected in the 2018/19 fiscal year, B.C. average home prices declining, more rental home supply coming on stream and 99.8 per cent of British Columbians exempt from the tax.

When asked by Glacier Media why projected revenue from the SVT is not expected to decline over the next few years, which it would if more homes were successfully being rented to avoid the tax, Minister James said this was because the tax rate for foreign buyers and satellite families increases after the first year, from 0.5 per cent of assessed value to two per cent. However, this response does not account for the consistency of projected revenues in year three.

Changes could be made to SVT

Despite the government’s message that the tax is a success, the minister was clear that some of the finer details of the SVT legislation were still a moving target, and could be affected by her discussions with the mayors of affected municipalities.

James said, “Part of the reason I’m meeting with the mayors… is to hear from them first-hand the kinds of issues they want to bring forward from their communities. We will continue to review the tax — we’re always trying to improve our taxes so we will be looking at specific cases.”

The minister said that the revenue being collected will go into the Housing Priority Initiatives Account, which is reported publicly, so that taxpayers can see how the funds are being spent to improve housing. “The minister of housing and myself have been calling on organizations to come forward with their ideas and contributions on affordable housing, and these dollars will help. We’re also open to ideas and contributions from mayors and their councils.”

Asked about the exemption for units that cannot be rented out due to strata rental restrictions, which exemption only applies in 2018 and 2019, and whether that exemption will be extended going forward, the minister said, “This is a policy decision that will be made, with input from the mayor’s meeting and other contributions, and we’ll make a decision on that this fall.”

Following the media Q&A and the minister’s departure, finance ministry communications director Katie Robb was asked by Glacier Media whether the expiration of this strata rental exemption could be because the B.C. government is considering outlawing all rental restrictions on any condo unit. Robb responded, “That’s an issue that is being worked out along with the Ministry of Housing and Municipal Affairs, so we’re working on that policy decision.”

At the same time as the press briefing, immediately next door in the Pan Pacific Hotel in Vancouver, the Urban Development Institute (UDI) was holding a breakfast panel seminar with property tax and assessment experts from Burgess, Cawley, Sullivan & Associates to discuss the slate of new B.C. housing-related taxes. One issue raised at the event was how commercial properties could be affected by the SVT because of zoning that allows for potential residential use above commercial properties — effectively taxing the “residential” airspace above a commercial or retail unit.

Airspace that is classed as for residential use is currently exempted from SVT, but only for year one. When asked at press conference about whether the residential airspace exemption would be extended next year, Minister James replied that this was also part of the mayor’s meeting and decisions on this and any other exemptions and improvements to the tax would be addressed this fall.

The UDI panel added that the tax similarly applies to any residential portion of a property that has mixed residential and commercial/retail uses.

Paul Sullivan from Burgess, Cawley, Sullivan & Associates told the UDI audience that applying the SVT — along with other new provincial and municipal taxes — on development land was pushing up the cost of housing by a typical $54,000 for a new 800-900-square-foot condo in Vancouver.

The SVT in particular has a high threshold for exemption, as a developer has to pay the tax if construction has not yet started, even during demolition, remediation, and while waiting for a development permit from the City. “This could take years, and this is part of what adds to the cost of new housing,” said Sullivan.

Sullivan and his colleague Ryan Tung showed the audience of mainly developers how they can theoretically time the various stages of their development projects to legally minimize the taxes incurred on the land.