Commercial-residential building slated for Government Road will also have more than 13,000 square feet of office space
Nov 21, 2018 10:11 AM By: Steven Chua 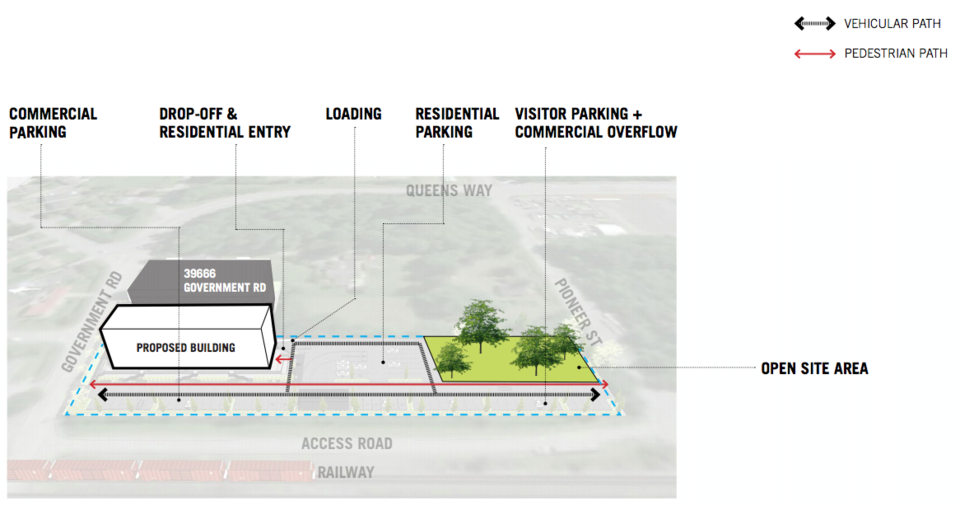 A diagram of the proposed development and its location.District of Squamish

As Squamish continues to grapple with a shortage in housing, the District has given the go-ahead on a purpose-built rental development called ‘Railtown.’

“This application was/is being processed as a priority because 100 per cent of the residential units have been secured as ‘market rental’ units with a housing agreement,” wrote District spokesperson Rachel Boguski in an email to The Chief.

Outgoing councillors approved the development permit for Railtown during their Oct. 2 council meeting. The project passed with little notice at the time, as it appeared before council the same day as the highly-debated Garibaldi Springs and seniors housing land swap developments.

Twenty-seven residential rental units are expected for 39660 Government Rd., which is located, as it sounds, right by the railway.

Grant Gillies and David Ransier of Target Homes are the developers behind this project.

It’s proposed that the first two levels will be dedicated employment space, which is about 36 per cent of the gross floor area. The 27 residential units, which include studio, one- and two-bedroom apartments, will be on the third to fifth storeys.

“This application supports the goal of preserving and creating new employment space in  Squamish, promoting employment opportunities for residents to work within Squamish,” reads an information report submitted to council.

MUD-1 zoning requirements in the area demand that 15 per cent of the lot be left as open space.

The area will include a mix of exercise equipment, retained wildlife trees (as determined by an arborist), picnic tables, vegetable planters and log benches.

A pathway, among other things, is also proposed for the area.

Developers are also planning to put in 83 parking spots on the site, with little over half going to commercial and visitor spaces, and the rest being reserved for residents.

Twelve of the stalls are anticipated to have access for electric vehicle charging.

Parking will be at ground level throughout the site.

There will also be 63 bike parking slots.

The applicants indicated they’re considering further development of the area beyond this proposal, though none of it was covered by this application.

In the future, they may seek rezoning and subdivisions on the southern portion of the site.