‘Us against them’ mentality noted at Rental Housing Task Force meeting
Jun 28, 2018 5:17 PM By: Naoibh O’Connor 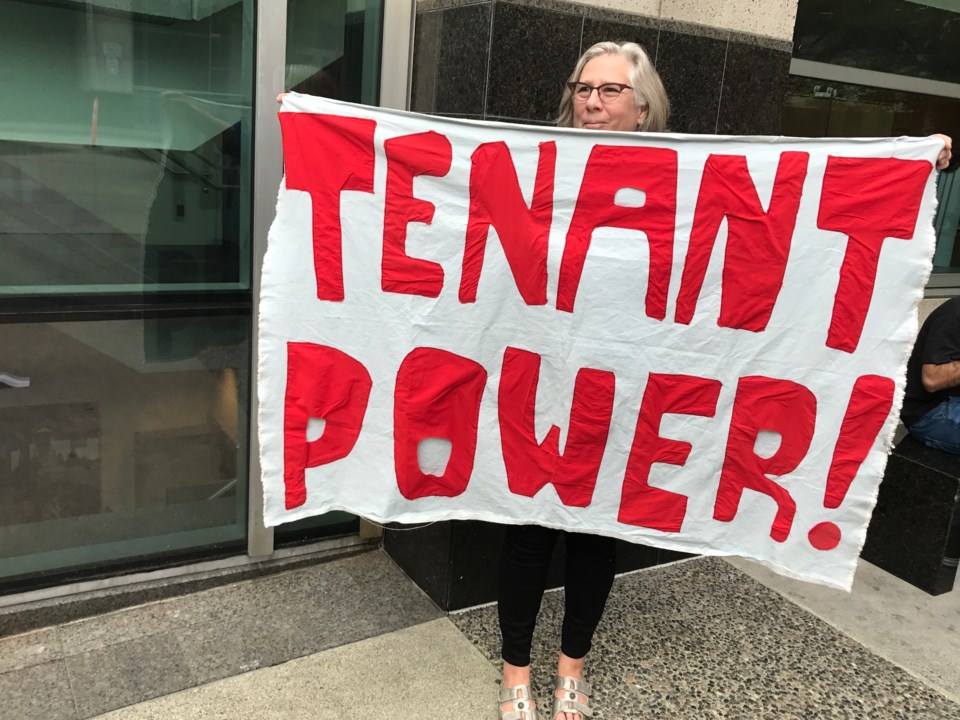 In the competitive world of apartment hunting, Julie Horsman and her partner Riley Cann found what many can't —an affordable rental that allows their dog, a 21-pound mutt named Smalls.

Horsman discovered the Arbutus Ridge one-bedroom, ground-level suite after searching for about three weeks, sometimes checking Craigslist by the hour. The couple has lived in it for just over a year.

To secure the home, Horsman made a sales pitch of sorts. She wrote a “crazy personal email” to the landlord.

“I was really honest. I was like, my dog, he’s basically like a cat. He spends more time on the couch. He’s not going to cause any problems. We’re nerds. I go to school and we don’t really do a lot a night. And I’m a clean freak so I’m going to really take care of the place. I hate mess. We’re pretty standard people who aren’t going to trash the unit,” she told the Courier in an interview after the June 27 Rental Housing Task Force meeting in Vancouver.

The meeting was the 10th of 11 held across B.C. by a three-member task force headed by Vancouver-West End MLA Spencer Chandra Herbert. Its mandate is to come up with recommendations to modernize the Residential Tenancy Act. After the final June 28 meeting in Surrey, the task force will spend the summer studying feedback and researching options before submitting a report this fall.

Horsman, a 32-year-old university student who is studying pharmacy, took part because she wants more pet-friendly housing. Cann, a 29-year-old who works in health care informatics, cited housing security as his top issue.

“I love this city and I feel that my security is very easily compromised by the current market,” he said. “I don’t want to leave — and I won’t leave — but I would also like to live here with a feeling of security.”

The June 27 meeting had participants sit at tables marked either “renters” or “landlords and property managers.” It wasn’t an enforced rule, and attendees were told at the start they were free to sit anywhere, but most seemed to organize themselves by those categories. Not surprisingly, considering Vancouver is about 60 per cent renters, there appeared to be far more renters than landlords or property managers.

A few civic election candidates showed up — COPE’s Jean Swanson, Anne Roberts and Derrick O’Keefe, as well as independent mayoral candidate Kennedy Stewart — along with a contingent from the Vancouver Tenants Union.

VTU member Stephanie Langford showed up with a “Tenant Power” banner. She left the Lower Mainland for 30 years to live in Ottawa but came back four years ago.

“I felt like it was a different place,” she said.

Langford rents a two-bedroom place in an older apartment building in East Vancouver. She’s a registered nurse who teaches at university on contract, so she recognizes she’s in a better position than most, but she’s nearing retirement.

“I’m in stable housing but all of us wonder what’s around the block,” she said.

Meeting organizers, who divided the evening event into two sessions, asked participants to answer questions about challenges they faced, and potential solutions, by jotting down thoughts on sticky notes that were collected and organized based on theme at the front of the room.

After each session, a handful of responses were read to give participants the flavour of the feedback, which will also be included in a future “what we heard” report.

Comments covered myriad topics, most of which have been raised by various factions over the past few years as affordable housing in Vancouver has become increasingly scarce.

They pitched solutions such as:

Talking about challenges at the Rental Task Force meeting in Vancouver. The "rent is too damn high" cluster is, revealingly, unsurprisingly, overflowing #vanpoli #vanre pic.twitter.com/d5vEdtrWKp

If anyone expected a raucous debate to erupt between landlords and tenants, it didn’t happen. The event format was geared towards discussion at each table but not so much between tables.

That didn’t sit well with one participant who remarked at the close of the session: “It’s still us against them. I would have liked [landlords and tenants] to sit together.”

That sentiment was shared by Horsman.

Horsman maintains good moderation could have kept such discussions from devolving into arguments.

Alexey Osipenko, an owner and a property manager, made a similar point in an interview with the Courier.

“What I didn’t like is that it was us against them. We are not in opposing camps. I used to be a renter myself, then I eventually became an owner, I became a landlord, I became a property manager,” he said. “We need to understand, actually, that people who are tenants now, one day they can become property owners as well. I think it would be poor economy if people stay for life as tenants… that would not be a good thing to happen. I would like to see more mixing between the two [camps] so both sides understand the issues with each other.”

Osipenko, whose company represents quite a few furnished rentals, nonetheless appreciated the opportunity to share his thoughts.

He wants new regulations to address the niche market of furnished rentals, which he said is far different than the market for long-term unfurnished rentals. Expenses, he said, are higher so a higher security deposit is needed. He also opposes the recent elimination of fixed-term tenancy — a decision he said doesn’t work well for short-term, furnished rentals.

Osipenko maintains some of the changes the NDP government introduced last December were premature as he expects a natural market adjustment in the next year and a half given the number of residential units being built that will become available.

That said, he called the task force meeting a “good step forward.”

“I like the idea of being heard, so today we expressed our opinions — both tenants and landlords. My hope is that those notes that we’ve submitted will be carefully reviewed and they will result in certain changes in the regulations that will be more adequate for current market conditions,” he said.

Chandra Herbert wasn’t surprised by the high renter turnout given the unique challenges renters have faced in Vancouver with its near-zero vacancy rate, including illegal evictions, mass rent increases, demovictions and renovictions.

But is he any closer to solutions?

“In many ways I know what to look for. In terms of coming up with solutions, I’ve got some good ideas. Now I have to check whether they are possible… I’ve got a lot of night time, summertime reading.” he said.

“I have a secure home. I want more people to [have one], so I don’t mind doing the work because, again, [renters are] going to have a better life. Our community is going to be a better place to live if we're not having to deal with the stress as much as we have been.”

Horsman and Cann anticipate improvements will be made to the Act but they’re not sure to what extent.

“One thing that I thought that makes me optimistic was a lot of the suggestions on the landlords’ and renters’ sides weren’t that much different… so I don’t necessarily think the interests are all that much different. I think everyone just wants an inclusive city where, whether you’re a landlord or a tenant, you feel like you belong,” Cann said.