Any buyer stimulus due to lower interest rates will be offset by economic paralysis, predicts association, which also calls for financial aid for households
Mar 17, 2020 10:49 AM By: Joannah Connolly 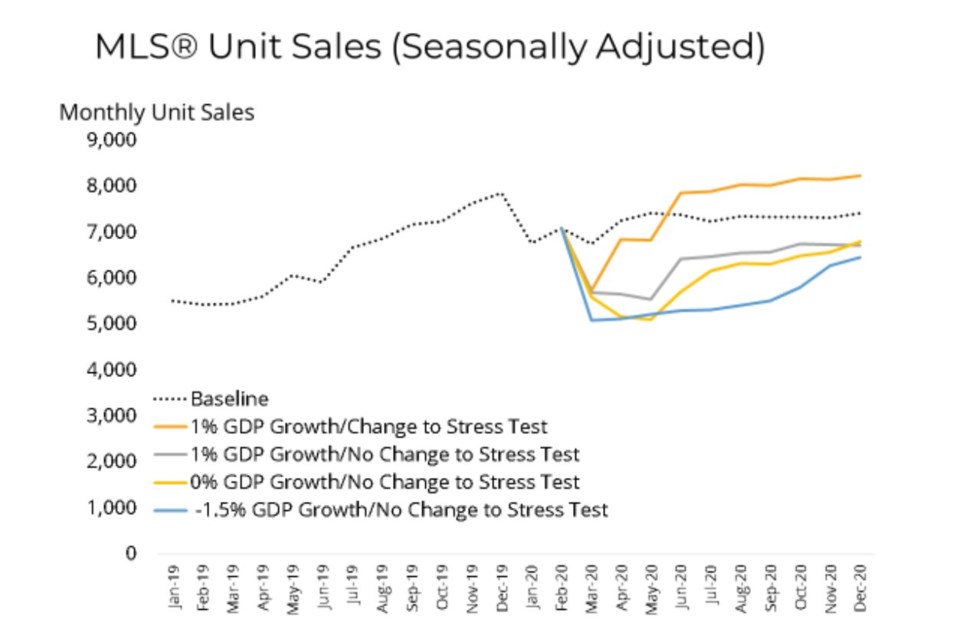 Interest-rate drops usually fuel housing sales, but this time they will be more than offset by the “unprecedented paralysis of economic and social activity” during the COVID-19 pandemic, causing B.C. homes sales to drop this spring, the B.C. Real Estate Association predicted March 17.

The tentative forecast by the BCREA admitted that “nobody knows” what will happen, but it ran a series of economic models under four scenarios.

All four scenarios predicted home sales in the province would drop in the spring and early summer. The market would then likely rebound in the second half of the year “contingent on the outbreak resolving.” However, only one of the scenarios found that home sales in the province would recover to a point of activity higher than if there had been no pandemic, with the other three forecasting a more muted recovery (see graph above).

Although some industry pundits have suggested that the dramatic interest rate cuts in response to the crisis would fuel housing sales, the BCREA said that the suspension of the planned relaxations of the mortgage stress test would “mute the impact of falling interest rates for the BC housing market.”

The BCREA went further by saying that a national recession was possible due to the pandemic-related uncertainty, and in particular its impact on oil prices.

The authors wrote, “The additional shock to the Canadian economy due to a collapse in oil prices – itself the by-product of a price war between the world’s largest oil producers due to COVID-19 – makes the probability of a recession in Canada that much higher.”

BCREA also applauded the CMHC’s move to work with mortgage lenders to help homeowners defer payments, but said it was not enough, and that financial aid packages would be needed for households, especially renters.

The report said, “An unfortunate but unavoidable product of recessions is losses in employment and incomes, which may put some financially vulnerable families in an even more precarious position. The CMHC announced that it would be working with lenders to defer mortgage payments by up to six months if needed, which should stem potential mortgage defaults and foreclosures. However, there is still a need to address lost income for those who cannot afford to practice social distancing by staying home from work, and for those who have to make monthly rent payments and can’t take advantage of payment deferrals. For those individuals and families, cash is king. That means these households will need government cash transfers to meet their financial priorities during this time, and we hope this will be part of the yet-to-be-announced stimulus package from the Canadian government.”

James Laird, co-founder of Ratehub.ca and president of CanWise Financial mortgage brokerage, said of the CMHC’s mortgage deferment program, “Any Canadian who will be unable to make an upcoming mortgage payment should reach out to their lender before they miss the payment to discuss options and come up with a plan that works for their financial situation. The goal of lenders and CMHC is that no one will default on their mortgage as a result of COVID-19."