Decision came despite opposition from some residents
Sep 19, 2018 10:36 PM By: Naoibh O'connor 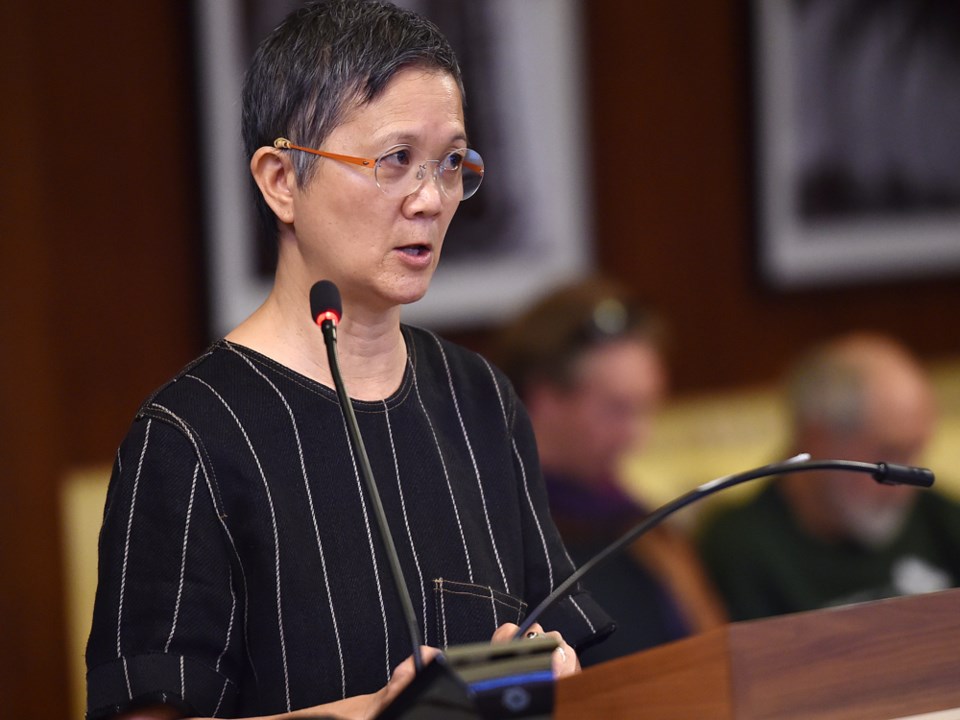 Janice Wong opposed the duplex plan because it contravenes community plans. She argued there was inadequate public consultation but council voted 7-4 in favour of the proposal. Photo Dan Toulgoet

City council voted to allow duplexes in most single-family neighbourhoods in Vancouver in a 7-4 decision after a two-day contentious public hearing that ended Sept. 19.

NPA councillors George Affleck, Elizabeth Ball and Melissa De Genova, as well as the Green's Adriane Carr, voted against the proposal, which was considered one of the "quick start" actions in the city's new Making Room program that aims to increase housing diversity in Vancouver.

Council's decision means duplexes will be allowed with or without small lock-off suites. It's an option for new construction only, and it doesn't include an increase in floor area over what's currently permitted. Laneway houses also won't be allowed in conjunction with duplexes. City staff say they don't anticipate land value to escalate thanks to those restrictions.

The rationale for allowing duplexes wasn't based on affordability, although they will be cheaper than single-family homes. It's meant to increase housing options.

Before voting in favour of the proposal, Vision Vancouver mayor Gregor Robertson said the city needs more options between single-family and higher-density housing forms. He pointed out laneway homes and secondary suites were also controversial, but allowing them has worked out well.

Reimer said the duplex proposal isn't a huge step, but it's a matter of justice to give less affluent residents hope that council will use "tiny tools" such as zoning to try and help meet their needs.

Coun. Raymond Louie said "if this is not gentle density, I don't know what this is because there is no extra density."

But De Genova argued consultation wasn't robust enough before she voted against the proposal.

"Zoning needs to be led by Vancouver's 22 neighbourhoods," she said.

Carr said she didn't see any evidence that the zoning change was important or needed.

"The real point is that we need to build affordable homes through different kinds of housing types than the ones that are aimed [at] the upper end of the income scale," she said.

Affleck took aim at Vision Vancouver in his remarks.

"After 10 years of Vision Vancouver leadership, this council has become renowned for lack of public consultation," he said. "If you tear this city apart to achieve these goals, you've not achieved much at all."

Ball said the sense of betrayal some residents feel won't be a good legacy for council, while Hector Bremner, who supported the proposal, questioned how duplexes could be an affront to democracy.

In comments before the vote, senior planner Paula Huber said staff anticipate there will be a shift away from building single-family dwellings to building duplexes. Currently, the city gets about 800 applications for new single-family homes a year. She expects half of that figure might flip to duplexes so there's the potential to produce 800 duplex units.

She estimated new East Side duplexes go for about $1.2 million, while West Side ones go for upwards of $2.5 million.

Duplexes will likely appeal to households earning $150,000 or more, according to Huber, which accounts for about 15.5 per cent of the city's households.

There are currently 283,000 dwelling units in the city, she added, 4,500 of which are duplexes, which translates to 1.6 per cent of the housing stock.

During the first day of the public hearing on Sept. 18, there was mixed reaction about the proposal, while on the second day the bulk of speakers raised objections, including Judy Graves, the city's former advocate for the homeless. Graves said she spent the past two decades moving First Nation families, immigrants, single parents and working class seniors, as well as other individuals, into suites across the city, which she now fears will be torn down in favour of duplexes.

Other critics, meanwhile, outlined many of the same complaints lodged on the first day of the hearing, including the fact that councillors, most of whom aren't running for re-election, were making a decision that they won't be accountable for, that there wasn't nearly enough consultation, that many residents likely didn't even know the proposal was up for consideration since notices weren't sent to individual homes, that character homes will be knocked down, and that it will lead to land speculation by developers, worsening the affordability crisis.

"That you would even consider sweeping changes without due process is unconscionable. You need to listen to the people, and you have not."

Hardwick argued if council passed the rezoning it would be like "putting out a fire with gasoline. It will be a feeding frenzy."

"The public must have meaningful input in the planning of their neighbourhoods," she said.

The city says its Housing Vancouver strategy, which was adopted in 2017, included consultation with more than 10,000 residents over 18 months. That process identified a desire for "missing middle" housing options across Vancouver, which led to the Making Room program, which was adopted in June. The program included the duplex proposal as a "quick start" action.

Four information sessions were held this month about the proposal.

The meetings were advertised in the newspaper, at community centres and libraries, and through a social media campaign. Email notices were also sent to neighbourhood organizations and individuals who had signed up for notifications through the Housing Vancouver process.

Individual notices were not sent to homes. The Vancouver Charter only requires the city to notify the public about rezoning proposals in the newspaper and at city hall.

For site-specific rezonings, the city notifies residents within a certain proximity directly, which goes beyond what's required by the Vancouver Charter. Residents are typically not directly notified for citywide rezoning proposals. That was also the case when laneway housing was introduced in single-family districts in 2009 and when additional density was added to single-family zones to allow secondary suites that same year.

Representatives from Abundant Housing Vancouver, who spoke in favour of the plan at the public hearing, were happy the duplex proposal passed but stressed it was a very small step.

"With all the work that the planning department put in, I would have been very disappointed if it didn't pass," Owen Brady told the Courier. "We've been saying it's a step in the right direction, but it's a very small step. I don't think any of the disaster scenarios are going to come true."

"It's just such a small thing that we are up in arms over the idea of simply allowing two families to share the same square footage that we currently require [single-family] homes to consume. The drama over this is crazy... This isn't any extra density and it was called an atomic bomb. What would you call it if the proposal was for a four-storey apartment? What would that be? Would that be the Death Star?" he said.

"So yes, it's a positive step. It's a positive step simply because it gives more options, more ways to live in Vancouver. Some people want duplexes, some people don't. That's fine. Some people want single-family homes, that's fine. You don't need to tell people how to live. It's one extra choice, so why not? There was a councillor, Geoff Meggs, who once said tiny homes are not the solution. And this is true, tiny homes are not the solution, but homes like that, and laneways, and duplexes, work for some people. We do not need to look for a housing typology that works for every single person in the population. We need to allow lots of different housing types that work for lots of different people."