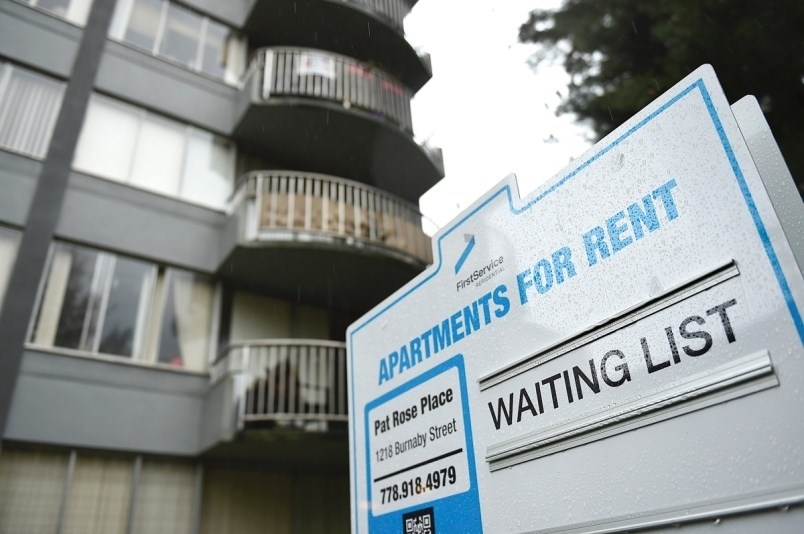 The average monthly rent for a two-bedroom apartment in Vancouver is $3,049. File photo Dan Toulgoet

Vancouver is once again the highest-priced city in Canada for two-bedroom rents, according to Rentals.ca’s August National Rent Rankings report.

The average monthly rent for a two-bedroom apartment in Vancouver is $3,049, while a one-bedroom averages $2,208. This is up from May, when the average two-bedroom cost $2,915.

One of the projects with the highest rents on Rentals.ca in Vancouver is downtown at 1295 Richards St. at $4.69 per square feet.

The report said that, “affordability for low-income renters is getting worse, as 10th percentile rent inflation is very high.”

With this in mind, the average property listed on Rentals.ca across Canada in July was offered for rent for $1,928 per month, which was a decrease of 1.3 per cent month over month. However, the properties listed in Vancouver saw an increase of nine per cent over last month.

“As expected, changes to the mortgage stress test last year pushed everyone down a rung on the property ladder, resulting in the highest rent growth occurring at the 10th percentile,” said Ben Myers, president of Bullpen Research & Consulting.

“This means the people who can least afford an increase in their monthly housing costs are the ones being subjected to the highest rent inflation.”

Ontario had the highest rental rates on a provincial level. British Columbia was third, with an average asking rent of $1,889 per month. This figure represents an increase of two per cent month over month, following June’s three per cent monthly increase.

See below for Rentals.ca's latest infographic of rents across Canada.