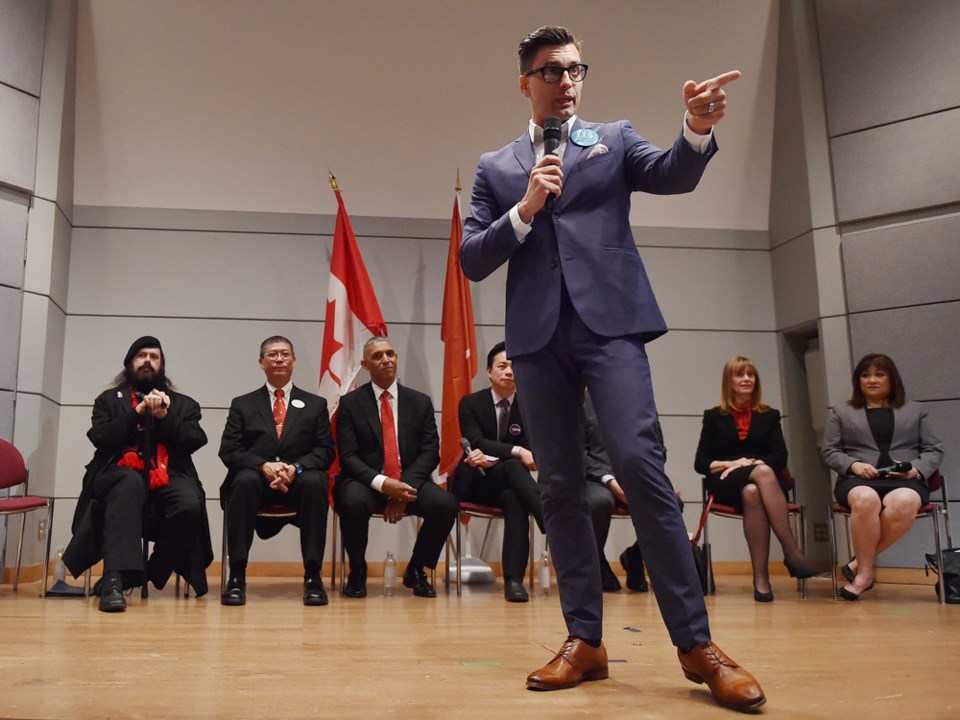 The Courier, Business in Vancouver and Vancouver is Awesome co-hosted the first mayoral debate of the election campaign Monday night. Here’s a summary of what six of the candidates had to say on housing issues. (Due to the format of the debate, all of the candidates were not asked the same questions.)

When asked about what they would do to help renters in the city, YES Vancouver’s Hector Bremner said that his new party would implement a three-year action to approve 50,000 to 70,000 more rental units for “those that need it” and aim to “prioritize and cut the red tape” and cut the community amenity contributions that, he said, have triggered many rentals to be turned into condos.

Independent candidate Kennedy Stewart said he would commit to creating 85,000 new units in the city over the next 10 years, 50,000 of which would rentals with 25,000 units at non-market rental rates. He also said that in the meantime he would bring in a renters’ advocate.

“We’ve got to look after current renters,” he said.

Fred Harding, with Vancouver 1st, also targeted the city’s community amenity contributions (CACs), which are in-kind or cash contributions developers must pay when the city grants a rezoning permit.

Harding gave the example of one case where a developer had to pay $43 million in CACs.

“That gets passed on to rent,” he said. “It’s not sustainable. It’s untenable and we really have to do something about CACs.” He said the party would reduce, if not eradicate, CACs.

In talking about what types of housing should be allowed in the city’s single-family neighbourhoods, Non-Partisan Association candidate Ken Sim criticized the current Vision Vancouver council for “trying to ram something through that will fundamentally change how our city looks” – a public hearing is scheduled for Tuesday that will determine whether duplexes will be permitted in most single-family neighbourhoods, with staff looking at the possibility of allowing triplexes, fourplexes and four-storey apartments in low density neighbourhoods.

Sim said there needs to be a city-wide plan and promised consultation with all residents.

Independent candidate Shauna Sylvester said the policy is coming “very, very late” and it fails to provide an affordable mechanism for upzoning. “That’s the problem.”

ProVancouver’s David Chen said the party has always advocated for a city-wide plan.

“You can’t just open up the streets to development without a plan.”

Check out the full debate video on Facebook here.

- With files from Joannah Connolly