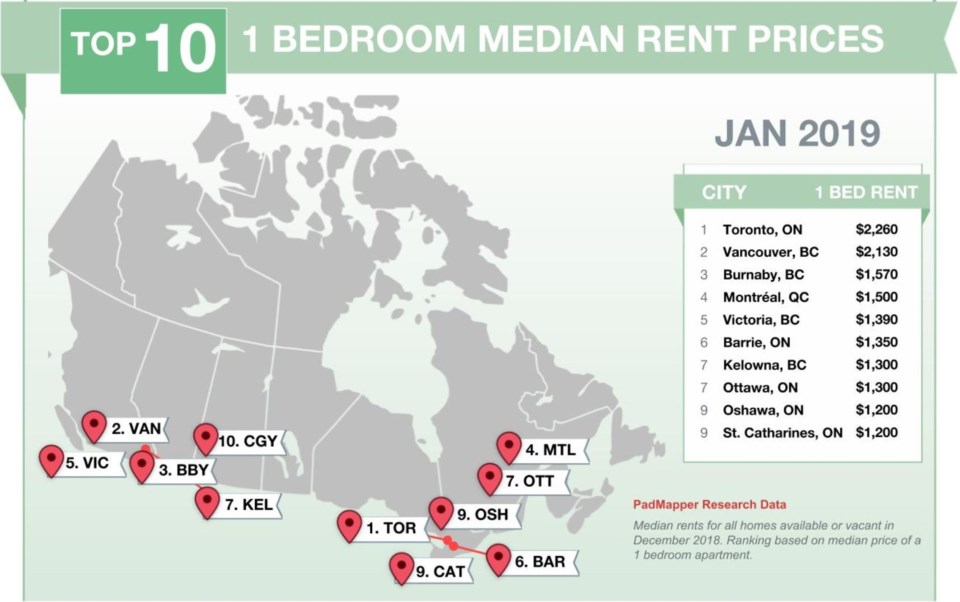 With rental vacancies still incredibly tight and new rent control caps coming into play, the price of advertised rents in major B.C. cities are climbing way above inflation, a new study has found.

According to the January 2019 monthly report by rental website PadMapper, the median advertised rent for a one-bed apartment in Vancouver in December 2018 rose by 6.5 per cent year over year, to $2,130.

That’s the second highest median price for one-bed rents in Canada after Toronto’s $2,260 – itself a whopping 11.9 per cent annual rise.

Burnaby saw one-bed advertised rents soar by 9.8 per cent year over year to $1,570 a month, which was once again the third-highest in Canada.

As PadMapper uses only its own listings to calculate median rents, its results can vary month to month.

The allowable annual rent hike that B.C. landlords can impose on sitting tenants has been two per cent plus inflation, which in 2018 totalled four per cent. As of 2019, this allowable increase will be reduced to inflation only, set at 2.5 per cent for 2019.

However, this does not include any increases to rents on advertised units between tenancies, which are the prices captured by PadMapper. Rental price increases between tenancies are currently at the discretion of the landlord and are not government controlled.

A combination of rising costs and taxes, and the incoming rent-control cap, could be the reason for the spike in advertised rents in December.

PadMapper said in its nationwide report, “In terms of year-over-year changes, a majority of rents (17 out of 24 [Canadian cities surveyed]) saw double-digit growth rates between one and two bedroom prices. It seems Canada remains a hot market for rentals as we begin the new year and isn’t showing signs of slowing down.”