Why is this city councillor visiting every Vancouver neighbourhood this year? 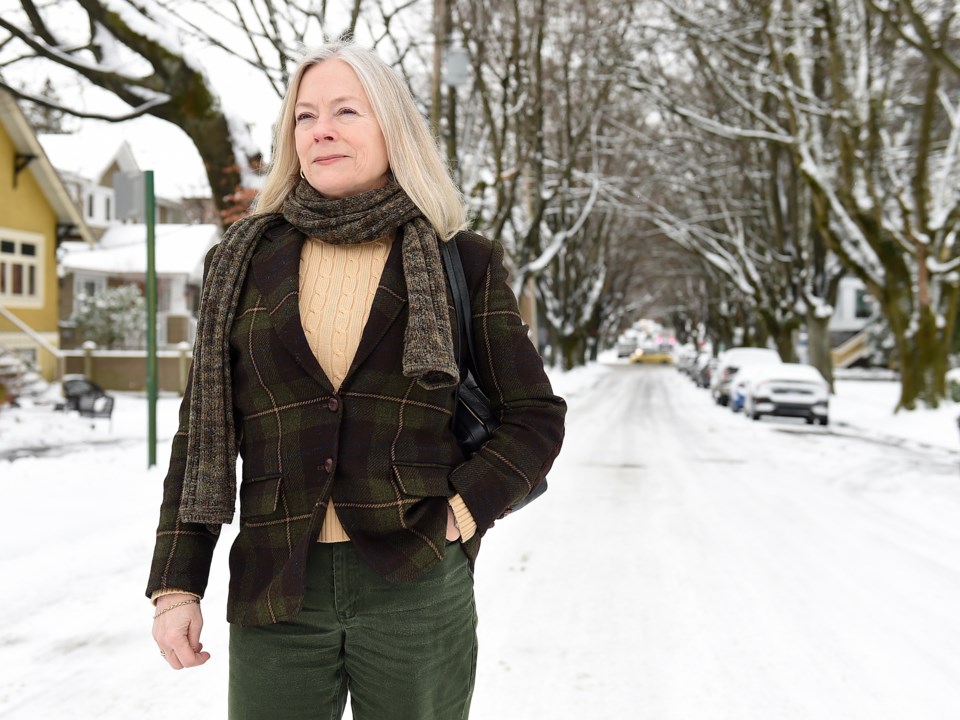 NPA Coun. Colleen Hardwick, who's often been at odds with her fellow councillors when it comes to development votes, is embarking on a year-long tour of city neighbourhoods to talk about density. Photo Dan Toulgoet

NPA Coun. Colleen Hardwick is launching a 50-neighbourhood, year-long tour of the city this month, beginning in Marpole, to collect feedback about where residents think density should be located. The boundaries of the 50 neighbourhoods were defined through an exercise she did with UBC geography students in 2015. Hardwick’s endeavour coincides with the beginning of the city-wide plan, known as the Vancouver Plan, which launched with a “listening phase” in November. Last July, Hardwick was the only councillor to vote against every clause in a motion dealing with the city-wide plan's budget and process.

The Courier talked to Hardwick about her tour, what she wants to accomplish, whether it’s a rebuke of how she thinks the city-wide plan is being handled, and how her council colleagues and staff at city hall are greeting it. Hardwick says she plans to share her findings with the planning department and the public.

What is the point of your tour of city neighbourhoods and what motivated it?

I've been working towards rebooting the city-wide planning process for years. I advocated for the motion, which I seconded [and] which Adriane Carr put forward. Then I watched as the motion was amended to the current state that staff are now acting on. I've been quite vocal in my concern about the direction that the new reboot of the city-wide plan is taking. It’s certainly different than what I had been working towards over these years. I'm very familiar with the prior City Plan that was developed through the ’90s and the community visions that were approved by council in 2005. There has been a real distance between neighbourhood planning and a broader, what I consider top-down deterministic, approach to planning, which, if you look at the way that the city currently is approaching it, [is] values-driven. They're working from a values-down [approach] and looking at the city in the aggregate. I tend to look at things through the lens of community and neighbourhood planning, and then bringing that upwards to the fullness of the city.

This sounds like it's a commentary on, or a rebuke of, how you think the city-wide plan is being handled.

I don't want to rebuke them. I want to work with them. When we did the [city-wide plan] launch, we went out to various different places. I went with staff to a place on 41st Avenue to meet with people from Arbutus Ridge, Kerrisdale and Shaughnessy — that's what got picked out for me. We had a really productive roundtable session where some of the folks brought out the fact that they had this council-approved ARKS [Arbutus Ridge, Kerrisdale, Shaughnessy] community vision from 2005. That's when it struck me — I said this is something that we should be doing in every single neighbourhood of the city. I had given the 50-neighbourhoods exercise, which was a UBC geography project that I did, to [chief planner] Gil Kelley and the planning department. I had been talking to the people in citizen engagement and then it just struck me — if I'm going to talk the talk, I better walk the walk. I thought what better way for me to do that than to go out there and be interfacing with people across the city.

What do city staff and your fellow city councillors think about your tour?

I've talked to a few people. I certainly talked to [the city] citizen engagement [team]. I've certainly talked with the planning department. I'm expecting to have cooperation for getting help with things like maps, but I'm not really asking them to do much. It's really something that I want to do and then I will share everything transparently that comes out of these sessions in the hopes that it will help incentivize people to get more involved in their neighbourhood.

Has anybody been critical of the tour in terms of your fellow councillors or city staff?

How is it different than what the city will already be doing for the city-wide plan?

If you look at what they're doing, it's very stakeholder oriented… what I've been seeing is not neighbourhood-location based, it's stakeholder based. What are the principles under which we're doing this? It’s values driven… in terms of looking at our focus on diversity and social issues, accelerating action on climate change, addressing affordability and housing, protecting and building our economy. These are all looking at things through the lens of what are the values that we are going to apply on the city, and we're going to interact with stakeholder groups that are involved in each of these areas. My concern has been that there's not been enough emphasis put on the people of the city… I am generally concerned that we talk about the public in the abstract. When we get into dealing with them in the particular, we see them as NIMBYs or as obstacles to change or however it's being characterized. I don't think that's constructive. I would rather go out to the neighbourhoods and say, “Hey, the city has to grow. We need to increase density. Where could your neighbourhood accommodate 500 to 1,000 new dwelling units over the next decade?” I can tell you that from the conversations that I have been having in the community over the first year of my term, that there is an alienation, that there is a strong sense the consultations that have been undertaken have been more about manufacturing consent or really trying to market to people...

I don't represent people that might want to live in the neighbourhood. Our job under the [Vancouver] Charter and democratic theory is to represent our constituents, which are the people that live within our boundaries. I have to believe that the people that are living within our boundaries are thinking about their children and their children's children, and they're not close-minded to more people coming in. This is why the exercise, though, needs to ask the people that live there where they think population increase can be best accommodated… It comes back to the notion of the livable city. What are we doing to build complete neighbourhoods that are evolving over time? I've watched the neighbourhoods of the city evolve over my lifetime. We need to look at how do we develop the neighbourhood, how do we anticipate density in such a way that is going to be ground oriented. I'm a big supporter of the missing middle and gentle density as principles in the way that we develop complete neighbourhoods that have multiple different building forms contained within those neighbourhoods — [that] are supported with sustainable mobility and transit, that have an economic component, whether it's retail stores at grade or co-working space, [that preserve] our green spaces.

Will you be talking about issues such as height?

I’m a planner. I’m interested in all different building forms. I used to sit on the board of the Urbanarium where we examined both spectrums… again, there's no one-size-fits-all model. All of the neighbourhoods of the city have developed in their own unique ways. The successful communities are ones that acknowledge and embrace their past while at the same time [are] looking to the future to determine how they're going to enable increased density as things go forward.

How will you reach people who are younger, who may not be members of formal community organizations or who represent diverse demographics?

I went through an exercise of identifying all different types of groups within different neighbourhoods. The more the merrier as far as I'm concerned. It's important to have a broad spectrum of voices. But I want to ensure that they are people that actually live in the area. One of the concerns that I continue to voice is that [I] need to ensure, as someone that's elected to represent Vancouverites, that I'm hearing from Vancouverites.

Since you've been elected, you have been at odds with your fellow NPA councillors and most of the rest of council on a lot of development votes, and even the city-wide plan vote. How much influence do you think your efforts will have?

I'm the only planner on council — I have both historical perspective, academic and professional relevance to the subject area… I'm concerned a lot of the time that there isn’t enough knowledge. When I was pushing for the city wide plan reboot, I don't think that probably half of council even knew about the prior city plans or any of the history in this. So there's a certain amount of frustration for me, to be honest, because I feel that I haven't been able to get through to people about my concerns. I'm going to continue to try and do so because my commitment is, and remains, to try and do what I think is right to get the city into better balance.

You have been criticized for representing the views of older, well-established West Side homeowners who perhaps aren't keen on density or high buildings. How do you feel about that criticism?

I think it's bogus. I think it's the narrative of the people that are promoting the property development industry. It is about growth promotion as opposed to growth management. I differentiate between the two. That's a convenient label and it's just not true. I'm not going to get into the nonsense that goes on Twitter, in particular. It's very counterproductive. I'm not going to go and engage in those discussions. It does annoy me a little bit. It does annoy me being misrepresented.

Note: This interview has been edited and condensed.