In their own words, the Tupper Tigers celebrate their coach
Feb 4, 2015 3:50 PM By: Megan Stewart 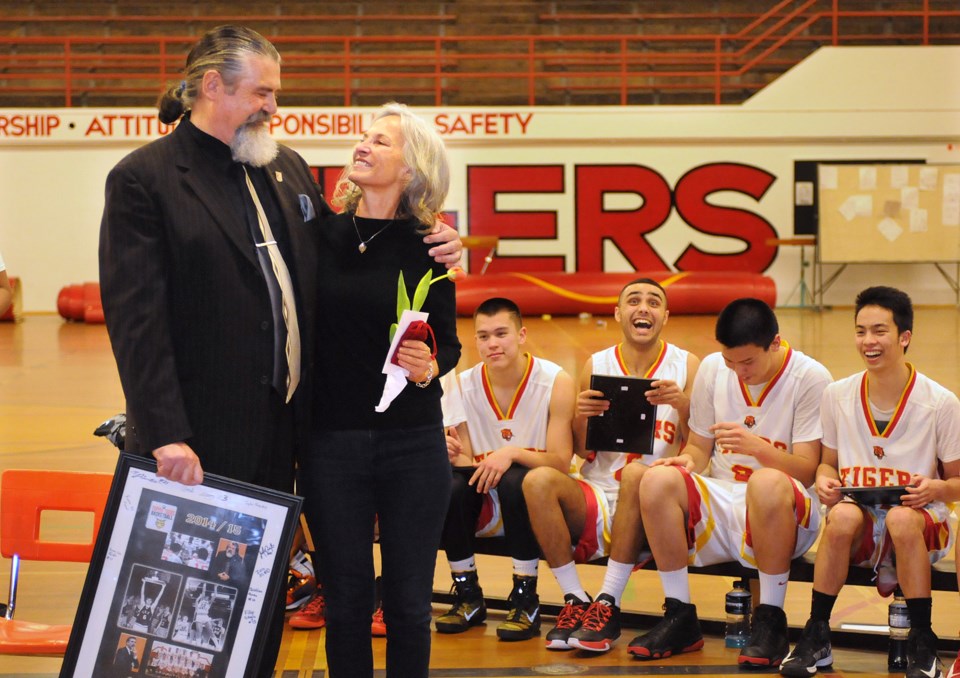 Tupper Tigers senior boys basketball coach Jeff Gourley and his partner Anita Roberts share a moment courtside after he was recognized for 12 years’ worth of practices, games and life lessons following the last regular season game Feb. 9, 2015 at Tupper secondary. The Tigers finish the AA/AAA city season with a 7-0 record. Photo Dan Toulgoet

“In the beginning, nobody really cared.” Jack Ho was in Grade 11 at Tupper secondary and playing for the senior boys basketball team in 2003, the first season Jeff Gourley volunteered to coach the Tigers.

“It was tough for him to come to a team like that because we didn’t really care either. We just thought he was another guy who was going to sit on the bench. No one wanted to coach. I actually had to go find our own coach. Randomly, I asked an old Tupper student to come and do it and told him he just had to show up and we’ll do the rest.

“I don’t know how [Gourley] ended up at Tupper. He was good for us. He gave us gym time. Him coming in, he wasn’t just a coach — he actually cared. He cared about us doing well, he cared about us putting in work and doing well. He didn’t just leave it to us.

“I kind of got in trouble in Grade 12… for shoplifting.” Ho stole a wallet from a neighbourhood mall.

“He was the kind of guy that, even if you made a mistake, he didn’t want to you compound that mistake.” Warren Leung graduated in 2011 and played two years at St. Mary’s University, also Gourley’s alma mater.

“Coach, he’s a real father figure. Straight up like another dad to me. Taught me everything on and off the court and about being a man. He would teach you things while you’re going through it. I didn’t even know what I was going through, and he taught me in a big way without me knowing. He would let me learn on my own… but would somehow guide me. He’s always putting kids first, before anything. That’s what’s crazy — he’s doing all this coaching, he’s not getting paid for none of this. That’s why I say he’s like a father to me.”

“He’s very motivational. He’s always running his mouth and it gets everyone going.” Ivan Yaco was a senior at Tupper in 2009, played for the Falcons and graduated from Langara College and is pursuing professional opportunities with the Philippine Basketball Association.

“What would he say? ‘Keep working, son.’ He was always trying to explain everything. Make sure everyone understood.

“I’m still involved because of him. I wouldn’t be the same person if I didn’t meet this guy, honestly. He helped me open my mind, he basically used basketball as a tool for me to open up for other things.” Yaco coaches basketball for the Jerome Outreach Society, a charity organization with the core belief that sport saves lives.

‘I definitely use the drills I used to play for him. I also learned… the way he talks to the kids, the way he gives them advice and the way he would check on them before and after. I try to show them I actually care about them, not just as a coach but as someone they can rely on.

“Jeff and basketball, basketball and Jeff — they come together — it can’t be just one of those.”

“Coach is that guy who is always cracking jokes, always smiling.” Patrick Cumaual graduated in 2013 and is now the Tigers assistant coach.

“He puts it out there that everyone is family. You can hear him all the time, all over the court, ‘Way to go, son.’ Even now as a coach, I hear him saying to me, ‘There you go, son.’ It makes everyone feel they’re doing a good job.

“I still talk to my university coach and high school coach roughly, roughly once a week to once a month.” Each year after the last game of the regular season, Gourley honours the graduating seniors as well as their parents and family for their commitment, effort and time. On Feb. 2, parents and players paid him tribute.

“I remember telling my high school coach when I first started coaching here at Tupper, ‘I just couldn’t believe it. I couldn’t get seven kids to come to practice. What’s the deal? Coach, can you explain that to me? I came to practice four hours early.’ ‘Yeah,’ he said, “You forget. You’re one in 1,000. Not everyone is like you.’”