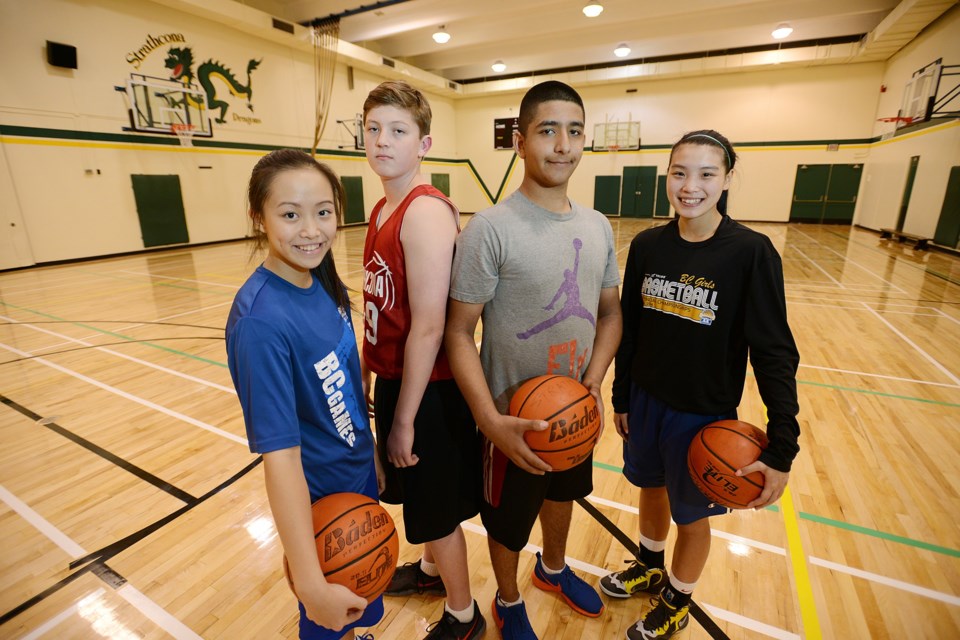 Lucy Guan (left), Billy Grayer, Adam Jalal and Julian Duong have grown up playing basketball at the Strathcona community centre. The 42-year-old floor may not be new but looks it. Photo Dan Toulgoet

For two months, one the busiest basketball courts in the city closed down.

Summer camps and clinics were moved outdoors, and players tried to turn their mind away from what was happening in the gym at Strathcona community centre. Games were played elsewhere, leagues adjusted and P.E. classes made do outside as elementary school kids tried to peek through the locked doubled doors of their gym. It was “painful” to have it closed, said one coach.

Their gym opens today. The wait was worth it. On Wednesday after new padding was added under each basketball hoop, the renovation was complete.

“It’s a thousand times better,” said Julian Duong, 16, who’s used the gym since elementary school and at Britannia secondary last season, was the leading point scorer for the Bruins.

The gym floor is almost unrecognizable following the estimated $65,000 refurbishment funded by the NBA Canada on the eve of a Toronto Raptors exhibition game at Rogers Arena this weekend.

Over 42 years, the hardwood floor had built up so many layers of wax that its dark pallor sucked light from the room. The NBA paid the Vancouver Park Board to sand down to the original hardwood, paint new lines and varnish the court. The walls were painted inside and outside the gym, two additional hoops were installed and all six backboard are now glass. Plus, all the rims can adjust to the height of the players, who begin as young as four years old in the Strathcona community basketball league, and older kids can safely dunk. The NBA provided 40 new basketballs.

“It’s not a new floor but it looks like one,” said Ron Suzuki, a recreation coordinator at the community centre and a long-time, dedicated basketball league organizer. “They gym was very dull. When they sanded it down, it looked like new wood but it was the original floor that was opened in the centre back in 1972.”

When the NBA came looking to make a community investment, Basketball B.C. suggested a handful of deserving locations. Suzuki believes the NBA selected the gym used by both the Strathcona community centre and elementary school because of its storied history and its commitment to accessibility.

It costs a player $40 to join a team but families are told they can pay what they can afford. Some pay nothing. Teams travel for games and tournaments. Children are also fed.

“This is possibly one of the busiest gyms in the city,” said Mitra Tshan, an influential basketball organizer and Britannia secondary coach and teacher.

The only women’s basketball league in the city (possibly the region) plays at the Strathcona gym, meaning it’s also a place where hundreds of girls have picked up a team sport they could continue to play as active adults.

Night Hoops, a late-night weekend league that seeks to keep kids off the streets and, in some cases from returning to jail, uses the gym.

Suzuki pointed out that numerous stakeholders — from the Vancouver School Board, Britannia community centre, park board, and others — showed the gym is valued by the wider community.

“When the NBA came to meet us, there were already about 12 people at the table,” said Suzuki. “I’d like to say they picked us because of our partners.”

The gym officially reopens at 3:30 p.m. Oct. 3. The NBA Canada and Toronto Raptors — along with Kyle Lowry and other starters — will host an NBA FIT clinic for 40 lucky elementary school kids drawn from the Strathcona basketball league.

The Toronto Raptors play the Sacramento Kings at Rogers Arena Oct. 5. Tip off is at 4 p.m.