Shuttles, ride-sharing, more parking lots and building gondolas have worked in other locations. Will they work on Mount Seymour?
Jan 13, 2017 12:05 PM By: Brent Richter 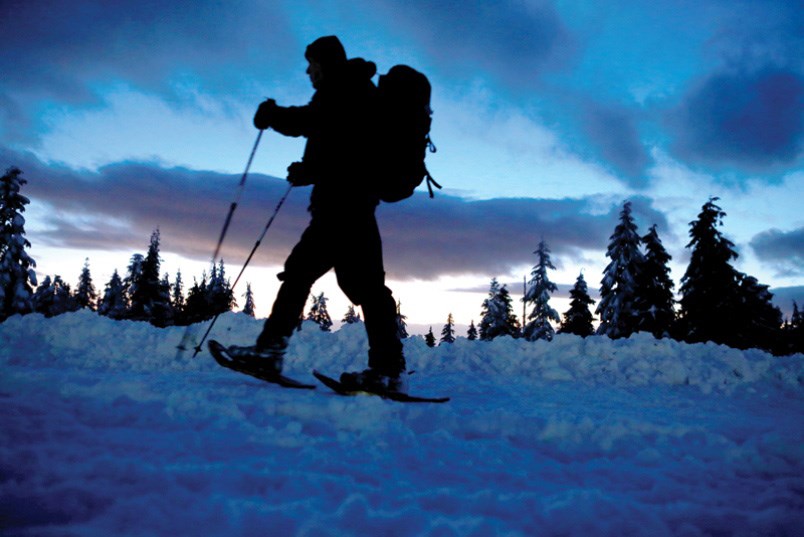 Snowshoer Nick Meissner makes his way along a trail at sunset in Mount Seymour Provincial Park. The province is now looking for ways to alleviate congestion on the park’s access road and parking lot during peak periods. Among the ideas being considered are creating new parking lots, increasing shuttle service and building a gondola to the base. photo Kevin Hill, North Shore NewsKevin Hill, North Shore News

A Saturday morning traffic jam getting onto the Lions Gate Bridge with the North Shore mountains beckoning is bad enough. But a traffic jam on the road leading to the mountains can make the frustration unbearable.

BC Parks is looking at options to alleviate the overcapacity problems at Mount Seymour Provincial Park, where a sunny Saturday can mean hours spent trying to access the park or Mt. Seymour ski resort.

The park is simply drawing more people than it used to, said Dylan Eyers, section head for the Lower Mainland for BC Parks.

“Really it’s the explosion in winter backcountry use that we’re seeing – winter hiking, snowshoeing and to some degree, backcountry skiing – and people are just loving it up there, which is awesome,” Eyers said. “But back in the day, when these parks were originally planned for and developed, we didn’t really anticipate there being upwards of 1,000 folks showing up just to go snowshoeing.”

With a majority of park users showing up at 9:30 a.m., BC Parks is looking into actions other parks have taken to deal with capacity clog-ups. Among them: increasing shuttle service, creating a reservation system, charging for vehicle access, building more parking lots, building a gondola to the base, and setting up a ride-share program.

BC Parks hired a contractor to survey park visitors on where they are coming from, how they get to the top of the mountain, how much time they spend, what activities they come to Seymour to do, and to gather their feedback on possible solutions.

All of the ideas on paper, however, are considered too preliminary to get into the specifics or talk about capital costs, Eyers said.

“We’re not there yet. … Those are questions this process will hopefully inform public opinion on,” he said.

The survey was welcomed by parks advocate and blogger Steve Jones, who has lobbied for better access to Seymour and Cypress.

“It’s great to see they’re investing some time to take a closer look at the issue. Certainly, parking capacity is kind of fixed up there but over the years, the population has been growing and winter recreation is becoming more popular, and the resort has been doing some upgrades, which has increased demand as well,” he said.

The best solutions are probably the cheapest and simplest, Jones suggested.

“It’s kind of a tricky problem because most of the demand is limited to a few small peak periods. If it was always busy, you might say build a parkade but it wouldn’t make sense to do that given it’s really a handful of days each year when you run into most of the problems.”

Jones said his top priority would be opening (the road gate to) the park earlier on weekdays to allow keeners to go for a morning snowshoe or hike before they go to work.

“The first thing you do if you have any kind of a location that is too busy is look at extending the hours,” he said. “There are hundreds of us who are interested in getting to the park just a little bit earlier and then getting out of the way when it’s busy. It’s kind of a shame to have these two mountain parks up there where it’s very challenging for people to catch the sunrise.”

Jones said he also finds it “remarkable” that neither Cypress nor Seymour have public transit access.

Jones also suggested the province expedite the planning and development of Pinecone Burke Provincial Park in Coquitlam to help take some pressure off of Seymour.

The survey period is now closed. Eyers said the results will be analyzed and presented to park users at an open house later in the spring for more feedback, allowing the province to start studying what’s feasible and can be tackled in the next year or two.

This story originally appeared in the North Shore News.