Bike theft denies us more than our property 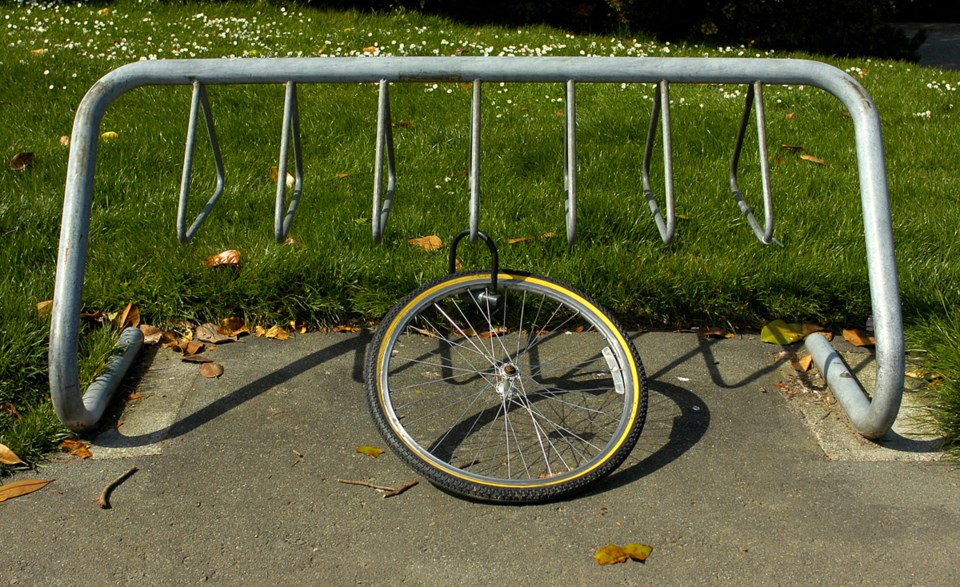 The risk of theft deters regular cyclists and, in some cases, prevents others from cycling at all. Photo Dan Toulgoet

I had been cycling in Vancouver for less than 12 months when my bike was stolen.

Since then, our family has experienced that all-too-familiar anger, frustration and helplessness on four different occasions, including — on two separate instances — the theft a double-wide trailer with two kid’s helmets.

While rampant theft may be considered inevitable in a growing cycling city, there are proactive steps our officials can take to minimize its effects, beginning with the simple act of recognizing bike theft is much more than petty larceny.

More than 2,000 bicycles are reported stolen in Vancouver each and every year, according to the city’s police, but the fact that we treat bike theft as trivially as other property crime, such as a phone or television set, ignores the larger ramifications.

When you consider the wider societal conditions at play, it becomes shockingly clear that bike theft directly affects our transportation patterns, impacting our public health, economy, environment and quality of life as well as congestion on our roads and transit systems.

In 2014, McGill University completed an important studyon bike theft in Montreal. Researchers found that just 36 per cent of victims reported the crime to the police, and seven per cent failed to replace their stolen bike, reverting to other less active forms of transportation.

If 2,000 stolen bikes represents only one third of the thefts in Vancouver, the problem is really much worse. Those 2,000 bicycles suddenly become more than 5,500 each year, or an average 15 stolen bikes each day. If seven per cent of those lifted bikes are never replaced by their owners, then every year another 400 Vancouverites miss out on the benefits of getting on a bicycle.

According to Translink, the risk of theft deters 45 per cent of regular cyclists from using a bike for chores such as grocery shopping. The same risk prevents 86 per cent of potential cyclists from chosing a bicycle over other transportation modes.

Our family, for example, seldom rides anywhere we feel our bikes are at risk, opting instead to use public transit or a car-share program. We also know many friends who are hesitant to invest in a bicycle that suits their individual needs, choosing instead to pedal around on an inexpensive, uncomfortable, and ill-fitted machine. Or worse yet, some refuse to invest in a bike at all.

Frustratingly, there are parallels between how authorities treat victims of bike theft and bike collisions.

In both cases, officials focus on small, relatively insignificant things one can do to avoid becoming a victim of crime, such as using a better lock or helmet. But these attitudes illustrate an inability or unwillingness to tackle the complexity of the problem and apprehend the criminals responsible.

For a step in the right direction, look south along the Interstate 5 to our friends in Portland, who continue to sit at the forefront of North American bike policy. The mayor and police chief recently joined for the Bicycle Theft Task Force, a team that includes the city’s department of transportation, police bureau, local bloggers and advocacy groups. They have been allocated all kinds of valuable resources, including a devoted website and Twitter feed, and most importantly, two officers who will spend 20-hours per week working the bike theft beat.

As Vancouver’s cycling numbers continue to surge, we appear to have become resigned to the inevitability of bike theft in our city. It doesn’t have to be that way.

If we are truly serious about growing mode share and creating transportation equality, we must tackle bike theft with an entire array of solutions.It will require buy-in from municipal and provincial governments, the regional police forces, and advocacy groups such as HUB. The task may seem daunting, but — as we’ve seen in Portland — all it requires is a leader (or two) willing to step up and lead the charge.

Vancouver Police arrested a man twice last month after he was accused of stealing four bikes on three separate occasions in two days.

Devon Reid L’Heureux, 32, was charged with break and enter on May 24. He is accused of entering a home near Broadway and Trutch Street where he stole a bike and helmet before fleeing. Officers had followed L’Heureux to Kitsilano because in the morning he was suspected of having two stolen bikes in his possession but could not be charged because of limited evidence.

After he was in custody overnight, on May 25 L’Heureux returned to Kitsilano and is accused of entering a second home and stealing a mountain bike. Four hours after leaving jail, he was apprehended by the K9 police team at First Avenue and Blenheim Street. Police recommended additional charges.