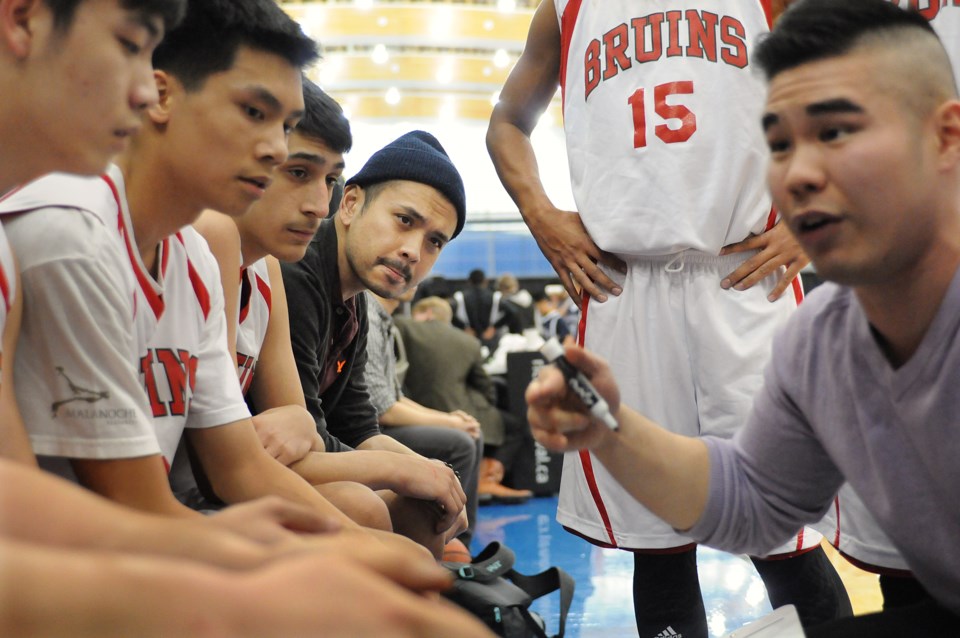 Britannia Bruins assistant coach Eric Ming, in the black toque, was on the bench through the Vancouver city and Lower Mainland regional tournaments. He was first diagnosed with cancer in 2006. Photo Dan Toulgoet

Soon after he’d left Britannia secondary to start his professional life as a young adult, Eric Ming was leading club basketball teams at Strathcona community centre and coaching underclassmen in the Bruins program.

“It’s always been a big passion of mine,” said Ming, 29. “I always wanted to coach at my high school to give back.”

The Bruins won the senior boys AA B.C. championship in 2008 and in 2010, when Ming was an assistant coach, they won for a second time in three years. During that time, Ming would often wrap morning practices to leave for the hospital. A year before he returned to coach at his alma mater, he’d had been diagnosed with leukemia. He was 20 years old.

“Basketball helped me get back on my feet. It gave me something to live for and a better appreciation. Once you get sick, you start to think what your life is really about,” said Ming. “For me, it’s like the challenges that my coaches presented me when I was in high school gave me strength to get through my treatment and I wanted to give that same experience to the kids.”

Ming coached the junior Bruins while he had cancer. And alongside Wayne Hoang, Ming has coached the last two season while undergoing chemo treatment.

“I’d come in during training camp, I would run the camp in the morning, go to chemo and then go to work after. That would be my schedule for the day.”

After his initial diagnosis in 2006, Ming relapsed more than once. “Between then and now, there’s been several rounds of treatment, relapses and remissions. I’ve kind of lost count over the years.”

“We stopped counting percentages a long time ago,” he said. “The doctors have been very honest and they’ve been working very hard to look for answers, but the fact of the matter is there are not a lot of people like me in my position. What it comes down to is to take it one day at a time. Every day is a gift.”

The senior Bruins are doing all they can to extend their season. Ming has attended five games this year, including the Bruins’ appearance in the city championship last month and again for Lower Mainland final last week at the Richmond Oval. Next week Britannia will play in the AA B.C. basketball championships next week in Langley.

“He can’t come out and watch us play so when I see him, it makes me happy,” said Dylan Joe, an all-star at the city tournament. “He’s a good coach. He likes winning, too.”

“He tells us to work hard and believe in ourselves,” said Andrew Fang. “It definitely gives us motivation. People see him as an inspiration so when we see him, we’ll work harder. He inspires us to work hard, be ourselves.”

The Bruins will have to channel the inspiration they feel for their coach in Ming’s absence. He won’t be at the provincial tournament, which runs March 11 to 14 at the Langley Events Centre, because he’ll be travelling in Asia with his parents.

Ming is a recreational sports programmer with More Sports, an organization that started 15 years ago in the inner city that creates inclusive, stable and sustainable sport opportunities for children and teens.

His parents opened the popular and well-regarded Phnom Penh restaurant in Chinatown in 1986 and that was the food they brought Ming during his many rounds of hospitalization and treatment.

Since the summer, Ming hasn’t been able to be as physical at practices as he’s used to. He was walking with a cane until recently, and now walks slowly on his own with a slight limp. His physical fitness and active lifestyle are essential to his wellbeing, he said. Being part of a team also elevates his mood.

“If you’re generally a more healthy person, you tend to tolerate the medicine a little bit better. Exercise, what it does is it’s a stress reliever and it helps me cope with anxiety,” said Ming. “It’s not easy having cancer. You have to deal with, you know — am I going to live?

“Exercise helps me. It’s kind of like a Zen time where I don’t have to think about anything. I can just think about working hard.”

Ming praised his players, many who are from Strathcona and the Downtown Eastside, are for their grittiness, determination and independence. His advice for provincials was to be physically prepared by eating properly, hydrating well and getting rest before big games.

He had more to say about their futures.

“My message to my players has always been to show commitment and to show kindness towards others. As long as you do that, things fall into place no matter how hard things get. I think they understand that coach is going through a rough time. They when you’re growing up, you tend to be bright-eyed and take things for granted. The world is like your oyster and for them to see a young person like me go through what I’m going through, it give them a better application of their lives of their teammates, of their coaches,” he said.

“I’ve always believed in this team. They’re a great team and they’re very spirited. And it’s that that has been carrying them through all this time.”