First and West lakes were a mecca for ski jumping in the 1920s before the last platform collapsed in 1967. Rotting wood and old metal jump platforms are still visible.
Aug 16, 2013 11:47 AM By: Mike Hanafin 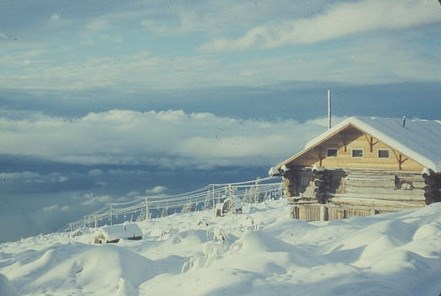 A January 1955 photo of Hi-View Lodge located at the top of the Hollyburn chairlift.District of West Vancouver Archives

Before the Lions Gate Bridge opened to traffic in the fall of 1938, Vancouver hikers wanting to visit the North Shore mountains had to take a ferry, then either hitch a ride up a logging road or walk all the way uphill from the shoreline.

Today, we can drive or bike to numerous trailheads and explore the history and natural wonders of the mountains.

The beauty of the Cypress Bowl and Hollyburn hiking areas is that it serves as the starting point to numerous outstanding hikes, including Hollyburn Peak, Black Mountain, Mount Strachan and even the Lions (via the Howe Sound Crest Trail).

But this week's suggested hike on the Hollyburn Plateau is a little less strenuous and still promises incredible views of four tranquil lakes and a tour of historic cabins, lodges and ski runs that date to the early 1900s.

The trailhead is at the Cypress Resort cross-country skiing and snowshoeing start area. Until late June, you still needed snowshoes on most of this terrain. Head east on the Burfield Trail to First Lake-home of the legendary Hollyburn Lodge, which opened as a ski camp building in 1927.

The lodge has come close to being torn down many times after years of neglect. But concerted efforts (mostly by groups called Friends of Cypress and the Hollyburn Heritage Society) in the last 15 years have saved it-especially since 2010 Winter Olympic Legacy funds were made available to help repair the building.

First Lake and West Lake, our next stops on the route, became a mecca for ski jumping in 1928 and remnants of the wood and metal jump platforms are still visible. Ski jumping ended in the 1950s and the last platform collapsed for good in 1967.

Walk south from First Lake and head east along a wide downhill section of the Baden Powell Trail, which in winter is the "Grand National" cross country ski run. Along the way you pass numerous rustic cabins-including "The Doghouse."

The first log cabins were built around 1900 for loggers and trappers but the majority of existing cabins were constructed between 1925 and 1950, often built with trees hewn from the property. By 1940, there were as many as 300 cabins. Close to 100 remain and they are passed on from generation to generation.

Turn left at the junction for the West Lake Trail and follow the route to a small clearing beside the lake, the original 1933 site of the West Lake Lodge. In those days, the skiing community was thriving enough to support two lodges and multiple ski clubs.

In 1938, the District of West Vancouver determined the lodge was sitting on land within the watershed. The owners were forced to dismantle the building and move it 500 metres south, one piece at a time.

Continuing east, our next stop is Blue Gentian Lake, named after the King Gentian flower that grows around the lake and blooms at this time of year. Boardwalks surround the lake and there's a small area to stop for lunch and enjoy the view, but persistent bugs can be a problem. Later in the fall, the bugs are mostly gone.

This can be a turnaround point for some, and the trail thins out a bit on the way to Lost Lake. The lake isn't lost, but some people get lost trying to find it. Stick to the trail and follow tree markers and signs. Lost Lake is worth a photo or two, then head south until you cross the bridge over Brother's Creek.

Turn right and take the Brother's Creek Trail back to Blue Gentian Lake. Turn left for a short trail to re-join the Baden Powell heading west to a large clearing. This is the former site of the rebuilt Westlake Lodge, which burned to the ground in 1986.

You have the option of taking the Baden Powell Trail directly back to Hollyburn Lodge. But if you have time and energy, turn left and follow a gravel road south. Shortly after crossing McDonald Creek, look to your left for a trail that leads to the decaying remains of a log cabin that was likely built around the turn of the century more than 100 years ago.

The gravel road turns west, crossing Marr Creek. Turn right at a junction with the Old Forks Trail. This is the upper section of the path that hikers and skiers originally took to reach the Hollyburn area. It eventually reaches Hollyburn Lodge for a short walk back to your car.

Mike Hanafin is an avid backcountry hiker who can see the forest and the trees. Reach him at mhanafin@shaw.ca.