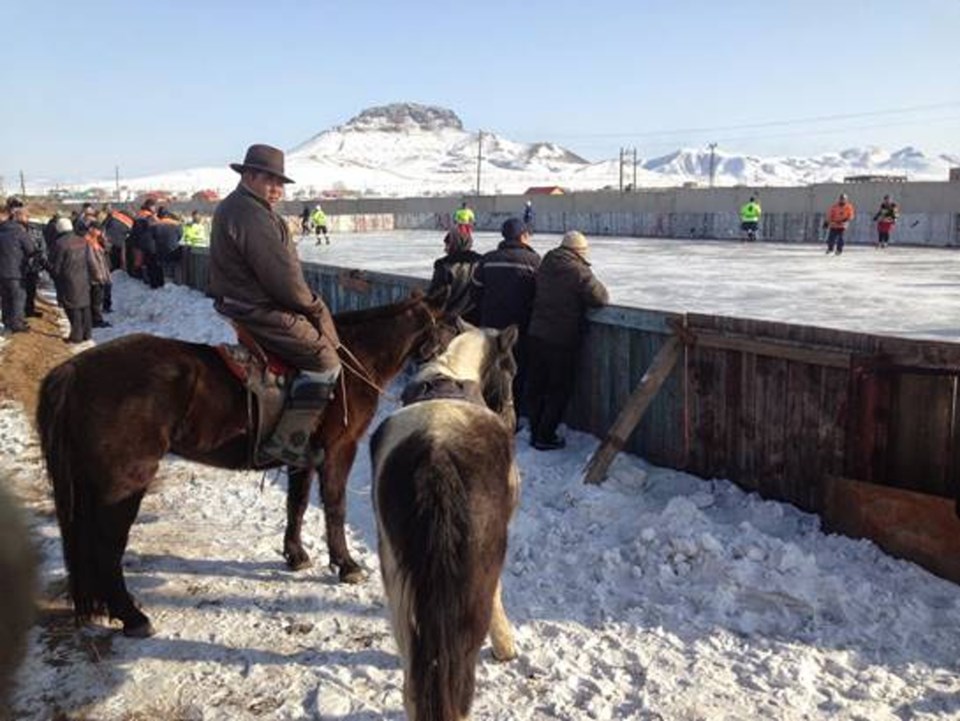 In the town of Zuun Kharaa, Mongolia, a herdsman watches the ice from the best and only seat in the house while Canadian hockey coaches host a clinic. Photo provided

A mere 80 kilometres from the Russian border in northern Mongolia, Nate Leslie got a phone call from a hockey coach in an even smaller, even more remote town than the one he was in. The coach was pleading with Leslie to make the two-hour drive on a road that only exists when the temperature settles well below freezing.

“They’d heard about the Canadians,” said Leslie, a retired professional player who now holds skills camps and trains coaches the world over with the company he runs with his brother, Leslie Global Sports.

“Our host didn’t even know they had a rink,” he added during an interview last week.

The Vancouver hockey coach finished one training session and then set out for the next town, arriving after 7 p.m. “It was pitch black, and the kids skating on the ice had been there since two in the afternoon, hoping we’d show up,” he said. “We used the lights off the cameras and the headlights of two cars and we lit a corner of the ice and did skating drills.”

In a country with just 10 ice rinks that are, incredibly, all outside and managed by hand often with cold water, players have a level of passion that far surpasses their skill, their limited training and the few pairs of skates that are passed around and shared. That’s what drew Nate Leslie and his brother Boe Leslie to Mongolia in the first place. In the country’s expansive, rural tundra, its competitive spirit and passion for winter sport, they recognized many of the same features that characterized their youth.  (“I eyeballed the longitude and it’s roughly like central Manitoba, very similar to the Canadian Prairies, land-locked, dry and cold in a similar way,” said Leslie.)

The brothers grew up playing elite hockey in Manitoba. Boe competed in the NCAA and both played professionally in Europe. They transitioned to management, coaching players and also to coaching coaches through their sports leadership company and the website How to Play Hockey. (“Dot ca,” Leslie was proud to spell out.)

One day three years ago, he was notified that a new coach was signing up to the site using an email address that was adorned with a small flag of Mongolia (which Leslie knew because he immediately looked it up).

“Six years ago they didn’t have that [Internet] access, now they can watch NHL games on YouTube,” he said. “We got to talking, and we instantly sponsored all of our coaching products and knowledge by giving it away for free.”

The shortened version of the Mongolian coach’s name is Pujee but his name and title is much more. Purevdavaa "Pujee" Choijiljav is the General Secretary of the Mongolian Hockey Federation and is widely considered, as the Leslie brothers learned, his country's grandfather of hockey. He also became their host when, last February, the brothers travelled to Ulaanbaatar along with a documentary film crew that included cameraman Patrick Bell and editor Rob Postma, both of Vancouver, and CBC sports journalist Karin Larsen, the project’s writer and whose children played hockey for Leslie.

Their documentary, Rinks of Hope: Project Mongolia, screens to a sold-out audience tonight at Vancity Theatre. A second screening is planned for March at UBC.

The Canadians volunteered to help develop youth hockey in Mongolia and along with their expertise, they brought 60 pairs of skates, 60 sticks and other equipment with them. That gear meant about 180 people could play because the equipment was shared. The NHLPA also donated 40 jerseys and late last year shipped 25 pairs of kids skates.

“If I did it again, I would just have taken skates and sticks because that’s all they need to get playing. They didn’t even wear mitts, definitely not hockey gloves,” said Leslie.

The brothers ran practices with 320 players and coaches and visited seven of the country’s 10 ice rinks, all of them outdoors. Thanks to additional donors, they distributed more than 100 sets of hockey gear and intend to return with more.

A typical day, described by Leslie, included, “The mayor of town standing there watching, a nomadic sheepherder watching with this cellphone filming us, and other coaches out on the ice in boots filming drills so they can remember them for later. With the exception of the capital, that’s what you’d expect.”

Larsen said many Mongolians, like Canadians, love playing sports and have a “huge appetite” for hockey. They also ride and race horses, and about a third of the population still pursues a nomadic lifestyle.

“The Mongolian kids were just so joyful when they were on the ice and would stay in -25 C all day if you let them. Nate and Boe had to reconsider their own level of toughness each day because they'd be freezing and wanting off, and the kids just wanted to keep playing,” wrote Larsen in an email.

“The big issue was always equipment. The kids may have skates — usually three sizes too big because adult gear is a little easier to come by — and an old stick that would have long ago been thrown away in North America, but that was about it. Pretty stark comparison to the situation in Canada where you see atom-age players with $500 skates and $300 sticks and shooting coaches and skating coaches...”

With some development and investment, the last-ranked hockey playing nation doesn’t just have a future in the sport but a bright one at that, said Larsen, herself an Olympian synchronized swimmer.

“The passion for hockey in Mongolia is the same as in Canada, they just don't have the resources yet. Could be scary in the future [because] the kids were really good athletes, tough and strong, and picked skills up really quickly,” she wrote.

Leslie said the players — who were of all ages from six to beyond 66 — went hard but with a few exceptions, their skills didn’t yet match their enthusiasm.

“The skill level was very rusty, sort of like an average house league here. But they go so hard, borderline recklessly,” he said. “We joked that if they ever get his hockey thing figured out, we in Canada are in trouble because they’re so tough and so resilient and hard-working.”

To learn more or donate to the project, visit the documentary's page on Kickstarter.