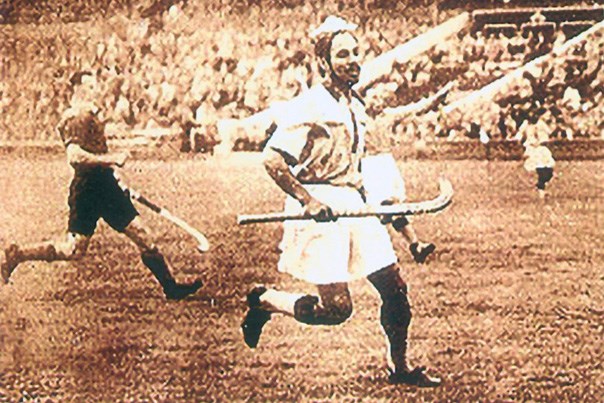 Balbir Singh Sr. can walk anonymously through the streets of Indian cities despite being one of the most decorated Olympic athletes in his country’s history. He won three gold medals in field hockey, India’s highlight team sport while he was a goal-scoring sniper in the 1940s and ’50s.

His 1952 record still stands for the most goals — five — in a 6-1 victory over the Netherlands to win gold at the Helsinki Games.

Yet, Singh Sr. is not celebrated. His goals and records are not remembered. Even Sidney Crosby’s clutch “golden goal” will still be heralded as the years pass since the 2010 Vancouver Games. The Sikh man accomplished all this for a nation that Vancouver journalists Patrick Blennerhassett says has not just forgotten but forsaken him. In his book, Forgotten Legend: Balbir Singh Sr, Triple Gold and Modi's New India, Blennerhassett details an exhaustive, rambunctious tale about a humble man with incredible hockey heroics. On the cover, a solidary figure in a turban steps onto an empty street. A second printing is already underway.

Now 92, Singh Sr. lives in Burnaby and is finding more recognition in Canada than he ever did at home. He was invited to Ottawa to meet Prime Minister Justin Trudeau and was slated to appear on Hockey Night in Canada: Punjabi Edition.

Singh Sr. returned to India earlier this month, but the Courier caught up with Blennerhassett to learn more about the athlete’s legacy.

Balbir Singh Sr. is not celebrated in the Indian sports community in the way other field hockey players are upheld and venerated. Does it simply come down to him being a Sikh man in a majority Hindu country?

Sadly, yes. There are other factors at work, but none of them hold the gravitational weight this does. Case in point: Dhyan Chand, a Hindu who played for British Raj before field hockey really developed internationally, is widely adored in India as a sporting legend. His career is eerily similar to Balbir’s, which would lead you to believe there would be a fierce debate about “the best ever” in India, but there is not — at all. Chand has two stadiums named after him, his birthday is National Sports Day in India, and there are multiple statues of him across the country. And this had spread outside of India, many international outlets have elevated Chand as well because of this religious bias that started in India, and most of it is just plain ignorance.

How does his life story capture the scope of 20th century India?

Balbir represents a stunning metanarrative of India. His father was a freedom fighter against British Raj. He was handcuffed into becoming a police officer for British Raj, witnessed Partition firsthand as an officer. He lifted India to its first medal as a sovereign nation mere months after Partition [in 1947] and represents how religious lines drawn during the country's strife continue to deeply divide the nation to this day. He flew into Delhi during the anti-Sikh riots in 1984 after Indira Gandhi's assassination and feared for his life in his own homeland. They were literally dragging Sikhs out into the streets and lighting them on fire, but he refused to take off his turban, or hide himself.

That’s terrible. And brave. He can’t be completely forgotten. Surely there are Sikhs — and other Indians and field hockey fans — who do know and celebrate him today.

Of course, we recently held an event at SFU and packed the auditorium. But when it comes to his recognition on a national and international level, where it actually matters, he is completely unknown. Sikhs have long been subjugated in India by the ruling Hindu majority, so this is a perfect example of this at play. Their relationship with the Indian government has been marred over the years, starting with Operation Blue Star, all the way to the assassination of Indira Gandhi by her Sikh bodyguards. Balbir's anonymity is a by-product of this strained relationship. Now with [Prime Minister Narendra] Modi in power, religious separatism has only gotten worse. Modi is a staunch Hindu nationalist and wants nothing more than for Hindus to rule India's culture outright.

What was the Indian field hockey scene before Independence and before Partition?

Completely underdeveloped. There was literally only one powerhouse team, British Raj. Then when Partition happened, the British Raj became three teams: Great Britain, Pakistan and India. Think of the 1980s Edmonton Oilers, and then one day you split up Messier, Gretzky and all of them into three squads due to their religious and political backgrounds. It would create quite the showdown. Chand played for this British Raj squad. In the 1932 Los Angeles Olympics, there were only three teams competing, and British Raj won the final against the US 24-1. Does that sound like an Olympic calibre tournament?

In another Canadian context, would Balbir’s story be something like this: Imagine Quebec separated from Canada but Maurice “Rocket” Richard, a hockey legend and quiet resister to francophone marginalization, still played for Canada and was completely ignored by the federal side?

Yes that's a great example, if Richard never got his due because of his French background because the rest of Canada was really upset about separation. The best was I describe it is imagine you're with some friends talking about the greatest soccer players of all time, and after about half an hour of heated discussion, nobody has mentioned Pele. After a while, someone would be like, “Hey, what about Pele?” This is Balbir's predicament, he's not even in the conversation.

Through history, what other athletes can we compare Balbir to?

Maurice Richard is a great example. Here was a guy who just wanted to score goals and bring glory to the Montreal Canadiens, but he kept getting pulled into ugly politics. In today's modern age, we rarely ask athletes to get involved in things like religion or politics unless they bring it on themselves. We allow them to do what they do best, excel at their sports, and we almost create a bubble around them. This was not the case for Singh Sr. or Richard, and the fact that they excelled despite this, I think, should give even more clout to their achievements. Did Gretzky ever have to deal with unfavourable calls from English referees who didn't like French hockey stars? If anything, it was the exact opposite.

He’s 92 today. How has Balbir been affected by being overlooked by his country despite his remarkable talent and achievements?

It's tough for him. I see the internal conflict he hides. He's such a proud Indian, he literally just wanted to be a field hockey player. But should the best field hockey player in the history of the world be relying on a meagre pension and the kindness of friends and family? It seems unjust — most legends of the game live cushy lives, adorned with accolades. Balbir has earned the right to rest on his laurels but he can't. I just want him to get his due, even this late in his life. It would be a perfect swan song and a great example of how we're trying to celebrate cultural diversity in 2016.

What is his connection to Canada? Is he finding recognition here?

His three sons live in Metro Vancouver, and he's been a Canadian citizen since 2000. This is why I wanted to bring this story to a Canadian audience. I hope Canada can bring him some justice because India has passed on it. I spent two weeks with him in India — we went all over the place, and he never signed a single autograph, posed for a random selfie or got stopped and recognized on the street. Can you imagine doing this with Gretzky in Canada, or Pele in Brazil? After about a block you'd be crushed in a mob.

You write that Balbir is your hero. What are the traits you admire in him?

He's such an idealist, and in today's murky age of morals and ethics, I love that. Stay true to yourself, your goals, even when everyone else is breaking the rules. He's a Canadian hero, and now whenever something goes wrong in my life, I take a deep breath and I think about all he's endured, the adversity he's suffered through. It gives me my own sense of resilience that I can get through anything if I just stick to my ideals. If he can thrive through it, going on 92, I can do it too.

In terms of recognition, what can the family expect from India now?

Nothing more than passing mentions in local Sikh-friendly newspapers. He's back to receive another award, but it will surely be a footnote in articles. In fact, over the past few years, he's gotten more reprints of Canadian articles about him and the book than he has actual articles about him from Indian writers. It drives me mad, and I hope other people start to get upset about this as well. It's a chance to rewrite history, to fight injustice and religious intolerance. He's Canadian, let's show the world how we treat our heroes.