Bike: KHS Flite 747 for day-to-day use; custom-built cargo bike for occasional use

Time on these bikes: Three years on KHS Flite; one year on cargo bike

Quote: “Bikes are community builders if you use them creatively.” 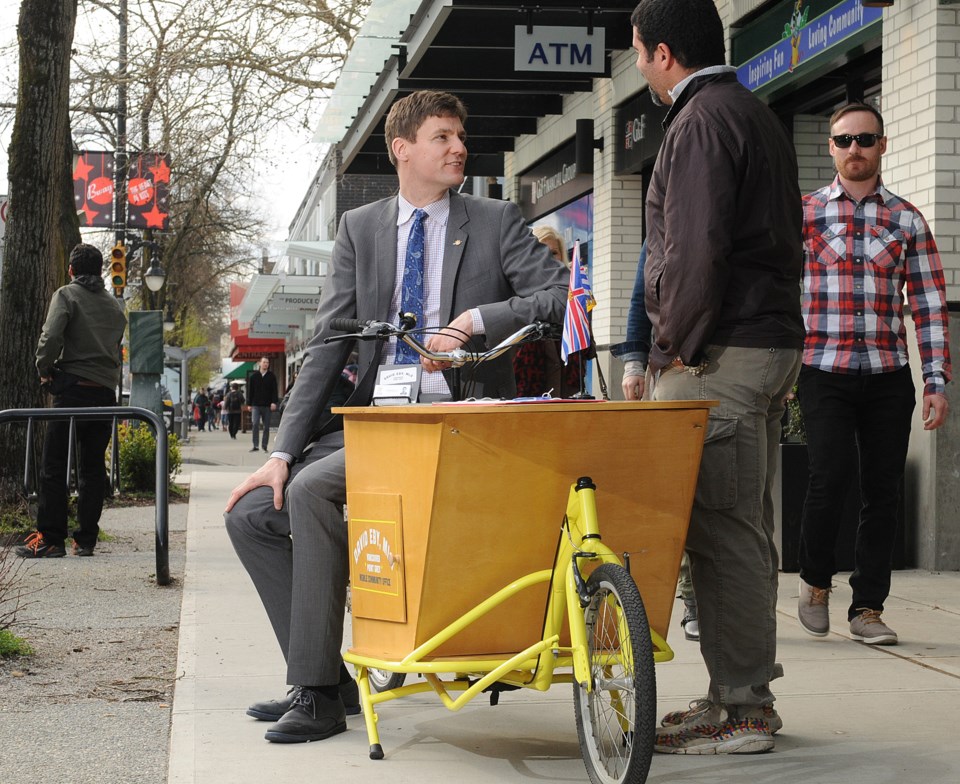 “Our initial idea was to convert a small camper van into a mobile office,” Eby said, “But we learned provincial guidelines specifically prohibit using part of our rent budget on a motor vehicle.”

With one full-time staff member and a limited office budget, he secured a small storefront at West Broadway and MacDonald and took inspiration from the rise of cargo bike- businesses in the city that sell everything from coffee to ice cream. He was introduced to bike builder George Rahi, and an idea was hatched.

Rahi, as it turns out, designed and fabricated a handful of purpose-built machines over the years and had just launched Curious Cargo Bikes, a business named after the reaction his creations received on the street. Eby’s mobile office was to Rahi’s first commission.

“I wanted to build something that provided a big presence but was still light and nimble to ride,” said Rahi. “There weren't many examples to draw from, which was part of the challenge.”

Summed up, the task he set for himself was “imagining new uses for cargo bikes and building on their unique ability to create gathering places wherever they go.”

Read more: My Bike: I ride where it's safe to learn

Read more: My Bike: I cycle for the freedom and smiles

Eby said the mobile constituency office has delivered in spades, attracting crowds at farmers markets, festivals and community events throughout the spring, summer and autumn. Eby posts a calendar of events he and the cargo bike will attend and the MLA accepts suggestions via an online form.

In addition to providing a means of getting out into the community, the cargo bike doubles as an icebreaker, said Eby.

“Approaching a politician is always an intimidating endeavor, but the bike is a great conversation starter, making me more approachable to my constituents,” he said. After a quick chat about the bike, Eby said he then offers assistance, usually by answering a question or addressing a concern.

Eby has always been a bike commuter, first braving the hectic streets of Toronto during his university days, and later Vancouver’s more bike-friendly streets. He applauds the recent investment in safe, separated infrastructure, and the subsequent surge in ridership numbers.

“Every year, I definitely notice more and more cyclists on my daily travels, and sometimes even find myself caught in traffic.” (This last one is a point he makes with glee.)

Of course, his riding contains the city’s latest and most contentious piece of infrastructure — the Seaside Greenway, which runs along Point Grey Road from the Burrard Bridge to Jericho Beach. Twelve months after its installation, he suggests even the most vocal of critics is coming around, and the community has begun to embrace the calmer, more humane traffic flow.

“And to their credit,” he said, “city staff have done a remarkable job in responding to individual concerns around rerouted traffic.”

On a provincial level, Eby is interested in cycling’s significant return on investment, calling it an excellent opportunity for the government to facilitate economic growth. In his role as the NDP’s critic on tourism, he sees the untapped potential for British Columbia as a bicycle travel destination. The potential is one hinted at by transportation minister Todd Stone in the 10-year transportation plan.

However, cycling projects remain a paltry 0.7 per cent of that spending, a far cry from the money needed to established it as a serious and reliable mode of transportation that matches the unprecedented levels of investment seen in other jurisdictions around the world.

Eby’s mobile office has been a creative solution, one he hopes other politicians will consider replicating. In fact, he has already heard from other MLAs in the Lower Mainland and has had interest from as far away as New Zealand.

Next up for Eby, plans to get his six-month-old son Ezra out for a spin to Jericho Beach.

UPDATE: for this particular project, Eby and Rahi worked out a deal to cover the materials and labour only. Writer Chris Bruntlett suspects a future commission of this scope would cost between $3,000 and $4,000 for a custom-built locally made machine. Bruntlett's family just imported a cargo bike from Denmark, which retails for almost $4,000: http://triobike.com/projects/triobike-cargo.