On a world championship orienteering course in southern Brazil, Brian Ellis discovered that running through a deep layer of pine needles is like slogging through snow. If he’d known, he’d have stayed out of a forest that had looked so inviting.

“It’s a strange landscape,” said Ellis, 70. “These were mature pines and they’ve been laying needles down for years and year, sometimes the needles are 20 centimetres deep and the branches that had been trimmed over the years had never been cleared away. It looked beautiful but it was tough running. And the temperature at this time of year can be from 20 to 35 degrees. I’m in there, thinking, ‘Oh lord, this is hard work.’”

After one foray among the oldest pines, he wasn’t tempted again. “You only figure that out when you step in it.”

At the World Masters Orienteering Championship earlier this month, the course was held, in part, on a pine plantation in the state of Port Alegre. Competitors used a map and compass to find controls scattered over the terrain in a test of mental acuity, decision-making and foot speed.

Ellis, a member of the Greater Vancouver Orienteering Club, won gold in his age group.

He sought out 12 controls and covered roughly five kilometres in 51 minutes and 31 seconds, barely beating his closest competitor by one second.

After two qualifying races in the long event, Ellis was seventh out of 68 men from around the world aged 70 to 74. During the final, the slowest racers started first. Ellis was near the back of the pack but running through rows of pines and scaling hills, he could have been on his own out there. “I only saw two or three people, even though there were almost 80 or so on the course.”

A semi-retired UBC plant biology professor who lives in Kitsilano, Ellis was drawn to the sport 40 years ago when his wife Marg signed up for an event in Ontario. They were both hooked and have since travelled the world to race.

“It’s a test of your ability to run and think and I really like that combination,” he said. “Also, it’s in a beautiful setting.” 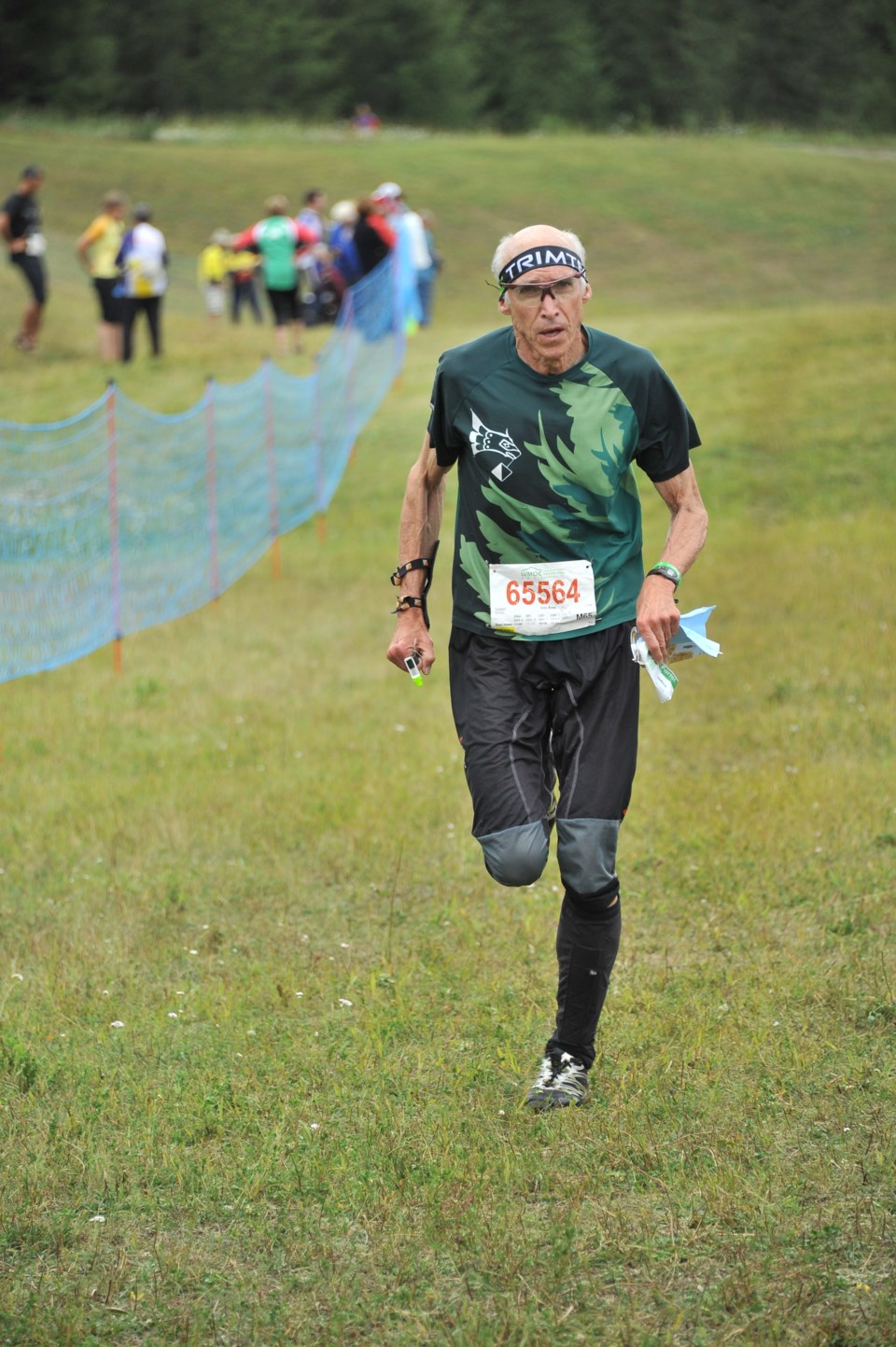 Orienteering, in theory, is the straight-forward exercise of running from one place to another. But this is no trail run, and taking a straight line is not always the best way to get ahead.

“It’s a real head game,” said Ellis. “You can run and maybe you can run really well and actually be able to find a number of controls but if you don’t maintain the discipline to know where you are on the map all the time, sooner or later the wheels will fall off and you’ll find you’re standing at a place in the forest where you don’t really know where you are.”

After reaching the second control and starting the third leg of the championship race, Ellis looked up and realized he wasn’t exactly sure where he was. His map — which shows elevation, water courses and even the density of forest — had been accidentally turned 90 degrees and, in haste, he’d gone the wrong way.

“I thought I was supposed to be going up over a gentle hill, but instead I was running alongside this hill and looking at a clearing on my right,” he said. “I couldn’t afford to be lost. I realized what I’d done, I could recognize that from looking at map. I had to wheel around.”

He wouldn’t have made the error if he’d taken a few seconds to get oriented, he said. “If I had used my compass, I wouldn’t have gone off like that.”

A race of survivalist skill that balances time, judgement and hustle, sometimes slowing down can mean a better result. “You have to convince yourself that the discipline it takes to not make a mistake actually pays off,” said Ellis. “I’ve said that to myself for 30 years and sometimes I can do it. I’ve had lots of good races, but in a situation like these finals, the pressure is really hard to ignore. The urgency to go faster because you know there are countless other good people against you, it can break through that discipline. If nothing else, I’ll remember how well it turned out because I managed to hold it together.”

On the final leg in view of the finish line, Ellis burst out of the forest toward the last control. “I had no idea how I was doing, but I knew I had been fast,” he said.

He reached his final mark and perked up when he heard his wife’s voice, intently driving him on.

“She yelled at me so urgently, the feeling was just electric,” he said. “She was yelling at me to run, and I didn’t know why this was so important, but I just took off like an antelope. I don’t think my feet touched the ground.”

Ellis, whose six-foot-three height is “all legs,” didn’t see any other racers around him but took off like a predator was at his heels.

“It was like some puma had just come out of the woods behind me,” he said. “I doubt I’ve ever run faster in a finish shoot.”

They watched as his closest competitor approached the end of the race. His time was ahead of Ellis’s at the last control but he was not moving as swiftly. “I had gone down the finish shoot so fast,” said Ellis, “by the time he finished, he was one second behind me.”