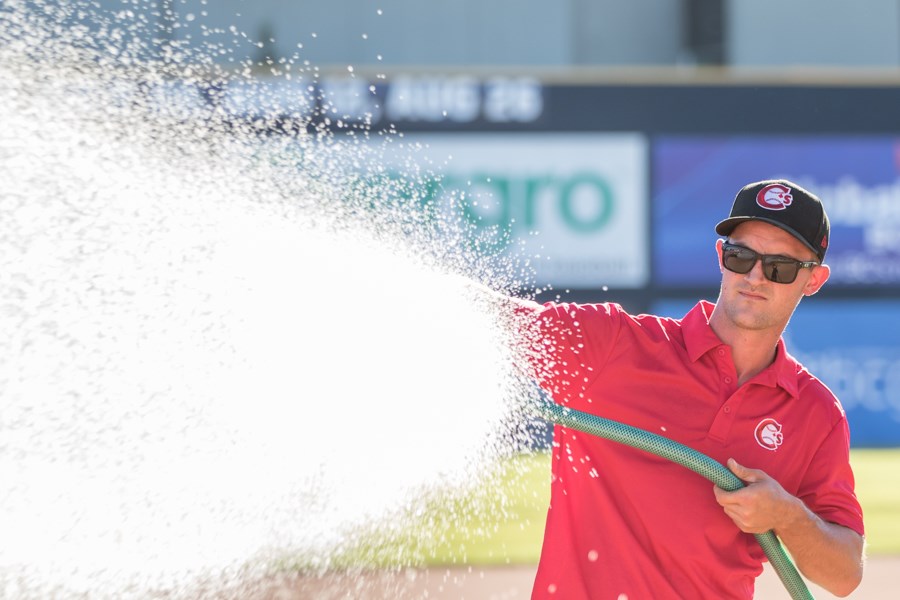 Groundskeeper Willie or Carl Spackler, he most certainly ain’t.

No, Ross Baron actually knows what he’s doing in the world of grass and turf, so much so that the 31-year-old was named Wednesday as the Sports Turf Manager of the Year for the Northwest League, in which his employer, the Vancouver Canadians, play ball.

The nod represents a franchise first for the Canadians, who are knee-deep in postseason action with the Spokane Indians.

The C’s head groundskeeper, Baron received the news early Wednesday in a somewhat backwards fashion. General manager JC Fraser summoned him to the dugout for a private tete-a-tete and soon enough, team president Andy Dunn was on speaker phone.

Dunn pressed the Gibsons native on why he was getting so many texts and emails about the playing field.
Baron sensed trouble.

“I was really started to wrack my brain about what I had done wrong,” he said. “I was about to get fired up there and go on the defensive. They really caught me off guard when they told me what the whole thing was about.”

Alongside a team of three others, Baron is tasked with the upkeep, maintenance and preservation of the playing surface at Nat Bailey Stadium. His days are filled with watering, mowing, seeding and monitoring the skies.

Vancouver’s erratic weather patterns can demand 16-hour work days — as the temperature and moisture change, so too, does the to-do list.

“It’s non-stop,” Baron said. “Being organized is key because the weather can be quite dramatic and change on a dime. This spring was a real challenge with how much rain we had in April and May. Drainage is a huge issue and something that you have to continuously work on.”

Baron landed at Nat Bailey in mid-February after a three-year stint working as a field manager with the City of Kelowna. His arrival coincided with the need for significant renovation work across the ball park. The biggest jobs on the list were to improve drainage and the evenness of the playing surface to ensure the ball would roll true.

As such, he brought in 600 tons of sand, ripped out all of the infield and foul territory and created channels to better filter water out of the outfield.

A life-long baseball and golf guy, Baron specialized in the finer points of fields as a means to stay around sport while also earning a paycheque. He graduated from the University of Guelph with an associate diploma in turf grass management and landed a full-season internship with Major League Baseball’s Washington Nationals in 2012.

The Canadians host the Indians tonight (Thursday, Sept. 7) in Game 2 of their best-of-three opening round playoff series, which the C’s lead 1-0. First pitch goes at 7:05 p.m.