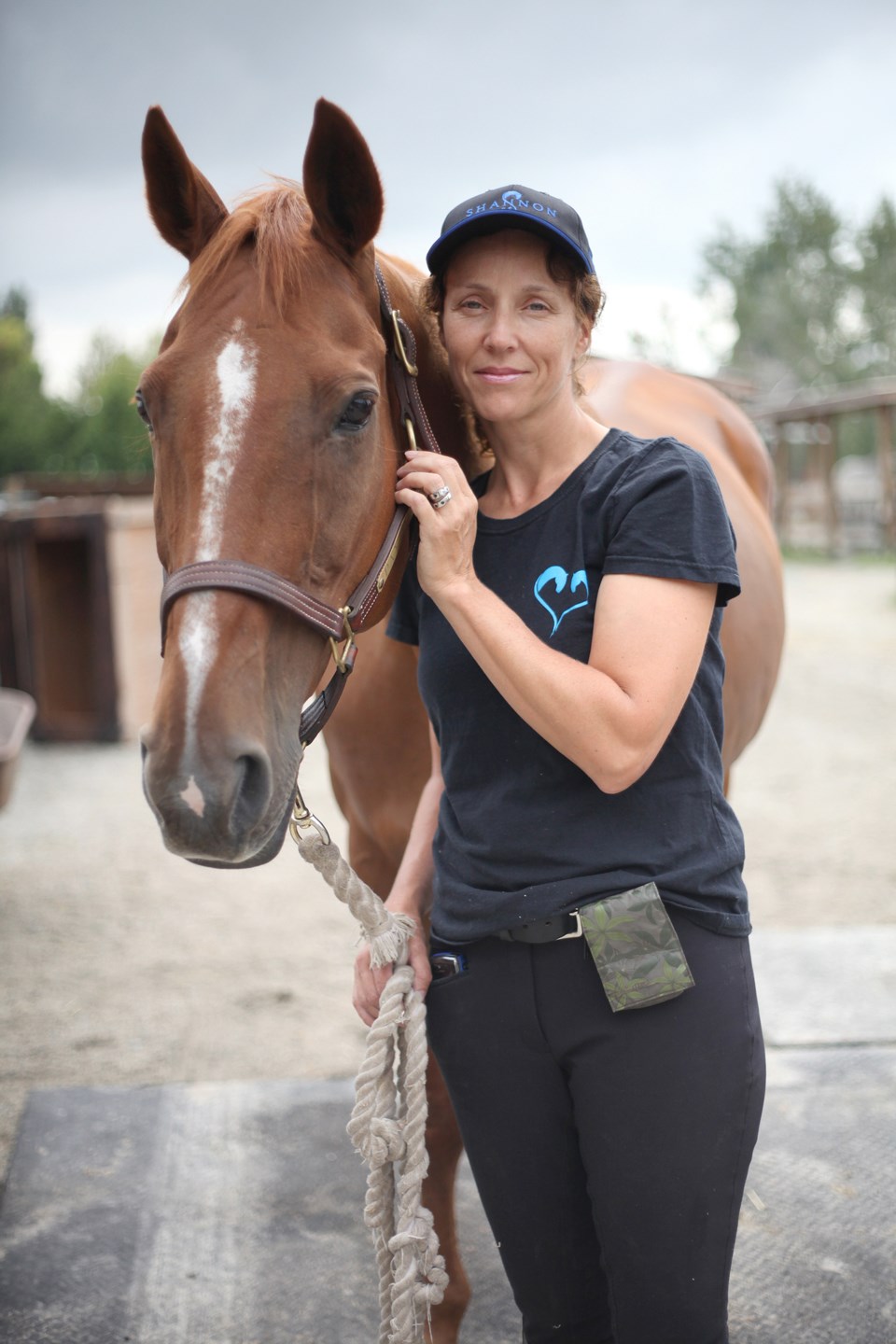 A thoroughbred racehorse has an aquiline face and fine bones, powerful athletic grace and a reputation.

“People are scared of thoroughbreds off the track,” said May Carmichael, the owner of Southlands’ Shannon Stables and a shareholder in racehorses with her husband.

Trained to sprint and motivated to win, racehorses are impressive creatures and an exclusive few reach the winner’s circle to claim fame and million-dollar stakes. For many others, their specialized, specific skills stunt their capacity and manners and if they don’t retire to a life of breeding, their fate can be uncertain. Any owner must be patient to retrain and rehabilitate such an animal, said Carmichael, and in most cases an off-the-track thoroughbred retires after three or six years but can live well beyond 20 as a companion or competitive horse.

In photos hanging in a barn-side office at Shannon Stables, Mario Gutierrez sits astride numerous racehorses, all owned at one point by the Carmichaels. “You see how his legs are tucked up,” asked Carmichael about the jockey. “A racehorse needs to learn that a person’s legs can wrap around their bellies.”

On Friday, Shannon Stables will welcome another thoroughbred racehorse, a five-year-old mare and the fourth retiree they’ve fostered in the past 10 months in partnership with the New Stride Thoroughbred Adoption Society.

New Stride is a registered charity dedicated to finding adoptive homes and alternative careers for thoroughbred racehorses. Founded at Hastings Racecourse in 2002, New Stride maintains close ties with Vancouver’s historic track and numerous owners. It has adopted out more than 120 off-the-track thoroughbreds.

Due to its unique agricultural designation within Vancouver’s city limits, Southlands is unlike most other rural communities. Because of the surrounding urban environment, including smaller lots without acres of pasture and paved streets linking stable to trail as well as off-leash dogs and families with bicycles and strollers, the horses fostered in the neighbourhood are carefully selected.

“They don’t just send any horse to Southlands,” Carmichael said of New Stride, which stables many of its horses at a farm in the Fraser Valley. “Soundness is key and […] a relatively calm disposition is really helpful, too. They’ve been ridden by New Stride volunteers first to make sure they have the mentality to be able to cope here.”

Carmichael organizes daily riding and training for the large fostered animals, which are sheltered at Shannon Stables at a discounted rate among roughly 30 other horses of various breeds, including five mini-horses, two of which the Carmichaels adopted from a rescue society. Volunteer trainers keep a diary of each horse’s progress and moods until a suitable adoptive home is found. New Stride pays for the animals shoes, feed and veterinary care.

Roughly 27,000 thoroughbreds were foaled in North America in 2010, according to the Jockey Club, and roughly two thirds will make a career on the track. Each year, 3,000 are retired. In 2010, 1,313 thoroughbreds were active on-the-track racehorses in B.C., according to Equine Canada. A Washington Post investigation revealed in 2010 that two out of every three thoroughbreds that come off the track, including the sound and healthy animals, are euthanized, abandoned or slaughtered.

“Most of the owners that we know are pretty caring about finding homes,” said Carmichael. Together with her husband Stuart, the Carmichaels have owned a share in 11 racehorses and can specify where each animal is today. “They are like my children, very precious, and I am always thinking about them,” said Stuart. “This is very typical of everyone I know.”

Many of their thoroughbreds are still competing, two are currently with foal, and their first, Leo, is boarded with them at Shannon Stables.

Another one of these horses, Fin du Monde, named for their son Finn, is now also at Shannon Stables after he retired in 2010 and was given away at no cost.

Kimberley St. Pierre became his new owner. “After I got him and told people that I had a thoroughbred off the track, people would be like: You’re nuts!”

The horse she has come to love was “absolutely psycho,” “unpredictable,” and lived up to the reputation of a hot-blooded, high-spirited racetrack athlete.

“You have to be fairly patient — not fairly, you have to be extremely patient and a little courageous,” she said. “You have to spend a ton of time working with them to get them where you want them. It’s not as easy as some of the other breeds and plus they’ve got their racing background so all they’re bred to do is go fast.”

St. Pierre, a board member at the Southlands Riding Club, undertook the training New Stride provides for each horse in its care. She wrestled with giving Fin du Monde away, wondering if she was the right owner and Southlands the right environment for a horse she likened to a “helium balloon” for his skittish habit of rearing up.  She persisted over three years at a cost of roughly $2,000 a month. Next week they will enter a competition at the PNE.

The thoroughbred racehorses that find new homes and new purpose with New Stride go through this retraining and rehabilitation before they are considered for adoption. Potential adopters are carefully screened and pay a $750 adoption fee.