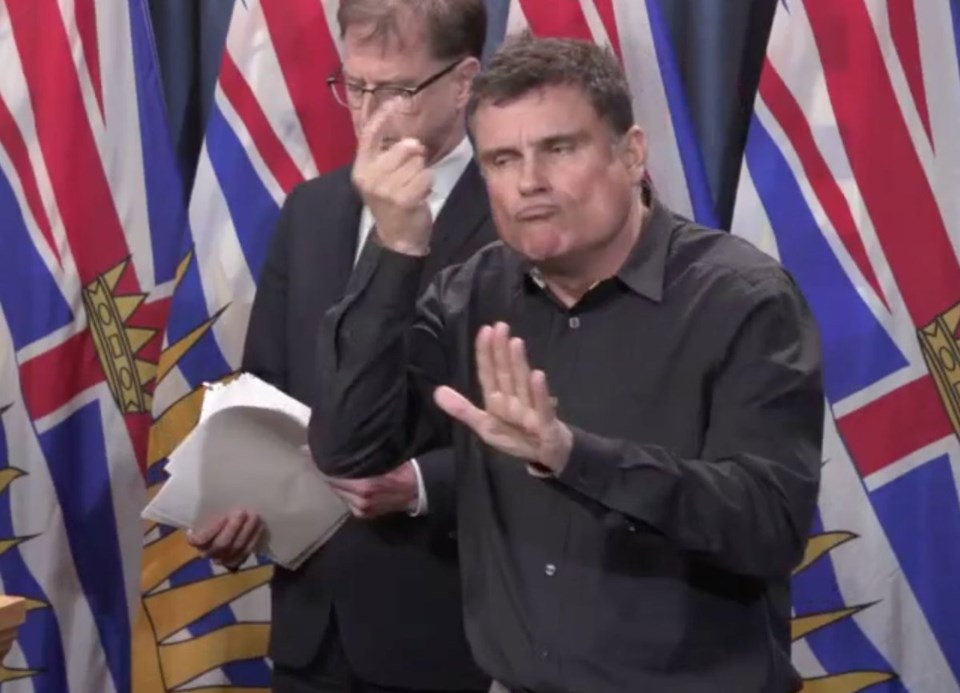 Provincial Health Officer Dr. Bonnie Henry has been a calming and reasoned voice who's become a familiar figure to British Columbians over the past couple of weeks as the COVID-19 global pandemic evolves.

Joined in press conferences by Health Minister Adrian Dix, she not only keeps the media abreast about the latest coronavirus developments, but many everyday B.C.ers have been tuning in to watch her live, near-daily updates broadcast from the legislature and other locations.

The Dr. Bonnie Henry Fan Club (@bonniehenryfans) is a Twitter account that popped up this month. It's exactly what you think it is: a place where the good doctor is celebrated. The account also shares updates on the virus, mostly by way of quotes from Dr. Henry.

Yesterday's update from the legislature was perhaps the most enjoyable yet, not because Dr. Henry brought sense to the chaos of the day (she did. No, yesterday's update was incredible because of one man: sign language interpreter Nigel Howard.

His expressive, passionate delivery of the messages Henry and Dix were relaying, using his hands and face, brought joy to people on a day when they could maybe need it the most.

Watch the entire thing below and see the magic if you haven't already.

Provincial Health Officer Dr. Bonnie Henry and Health Minister Adrian Dix give an update to the media on COVID-19 in BC.

For the latest updates and answers to common questions about #COVID19 follow @CDCofBC and see https://t.co/dt8VQCCIR0 https://t.co/1tXzTXhTZb

After the above aired, Twitter responded with kind thanks, which was an unusal thing to see in a usually-toxic space.

Sadie Hunter (@SadieKamloops) tweeted "I'm so glad he's there and getting recognition. I was mesmerized by his passion. It's nice to see such enthusiasm during serious times."

Matt Lissett (@MJLissett) said "My kids were glued to the press conference because of him!"

Lastly, The Family Network for Deaf Children (@FNDCandDYT) noted that "you’re not only doing a fabulous job - you seem to be developing a fan club too!"

I've reached out to Nigel and hope to interview him about his work, his outlook, and . I hope to bring you an interview with him this week.

Until then, here's what we know about him:

- He needs his own fan club.

I’m a member. I don’t know sign language, but I am riveted watching every gesture and I respect and admire the passion and commitment he brings to the job. https://t.co/8dFPdQn42J