TORONTO — Cineplex Inc. is inching towards a gradual reopening of its Canadian theatres, starting in Alberta later this month before going wider across the country in early July.
Jun 15, 2020 1:31 PM By: Canadian Press 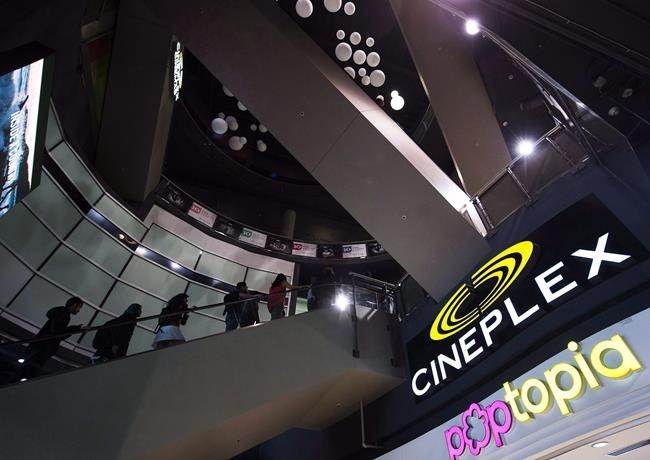 TORONTO — Cineplex Inc. is inching towards a gradual reopening of its Canadian theatres, starting in Alberta later this month before going wider across the country in early July.

The company then hopes to reopen on July 3 in as many other markets as government and health authorities allow, as COVID-19 restrictions begin to loosen in different regions.

Cineplex representative Sarah Van Lange said theatres in British Columbia would be among the second stage to open, with other provinces still to be determined.

The rollout will introduce a number of new measures, including reserved seating in all auditoriums to ensure physical distancing between moviegoers, and staggered showtimes to reduce congestion in theatre lobbies. Employees will also be required to wear personal protective equipment and concession registers will be limited to every other line.

Cineplex also noted its VIP cinemas, which serve food and alcohol to moviegoers' seats, won't resume operations as part of the initial phase.

Details of the planned reopenings were outlined as shares of Cineplex tumbled 17 per cent on Monday in the first trading session since a $2.8-billion acquisition by Cineworld PLC fell apart.

The drop came after Cineplex and U.K.-based theatre chain Cineworld clashed late Friday when both sides disclosed what they alleged was a breach of contract.

Cineworld, which is headquartered in London, says it became aware of a material adverse effect and breaches by the Toronto-based Cineplex which led it to scrap the deal, while Cineplex claims there is "no legal basis" to terminate the agreement, and that it is Cineworld that has breached the contract.

Neither side outlined the specific allegations in their statements, but Cineplex noted the contract explicitly excludes "outbreaks of illness or other acts of God" from what would be considered material adverse effects of the deal.

The Canadian exhibitor added that it "intends to commence legal proceedings promptly against Cineworld and seek damages."

Beyond the courtroom battle that could be ahead, Cineplex acknowledged that it expects COVID-19 to have "a prolonged negative impact" on its operations, and it has enacted layoffs, reduced capital spending and negotiated rent relief with landlords to help mitigate the financial hit.

Cineplex closed all of its 164 theatres nationwide in mid-March, around the same time most film distributors put a stop to releasing new titles.

While a trickle of smaller movies have played on big screens over the past few months, largely at drive-in theatres, Hollywood studios have been reluctant to return to business as usual without confidence that people are willing to visit their local cinemas.

Warner Bros. recently pushed Christopher Nolan's "Tenet,'' one of few big summer movies still on the schedule, back two weeks to July 31, and postponed "Wonder Woman 1984'' from August until the fall.

Other studios have pushed some of their biggest titles into next year, while Universal became the most notable distributor to experiment with at-home rental premieres designed to entice isolated viewers. The move has rankled movie exhibitors who consider it an attack on their already suffering business model.

Some regions of the world have struggled to get movie theatres back up and running. Chinese officials greenlit many local theatres to reopen, only to force them closed again over concerns of a second wave of infections.

Cineplex said it is taking its resumption of business one step at a time, starting with "measured operations" at the Rec Room — a chain of entertainment locations serving food, drink and arcade games. Its Winnipeg location opened on Monday, while Calgary and Edmonton as slated to reopen later this week with isolated gaming sections for small groups.

This report by The Canadian Press was first published June 15, 2020.

Companies in this story: (TSX:CGX)