NEW YORK — With love and pranks, Ian Paget and Chris Olsen are among millions of U.S. newbies looking to soak up social media stardom on TikTok.
Oct 28, 2020 6:08 AM By: Canadian Press 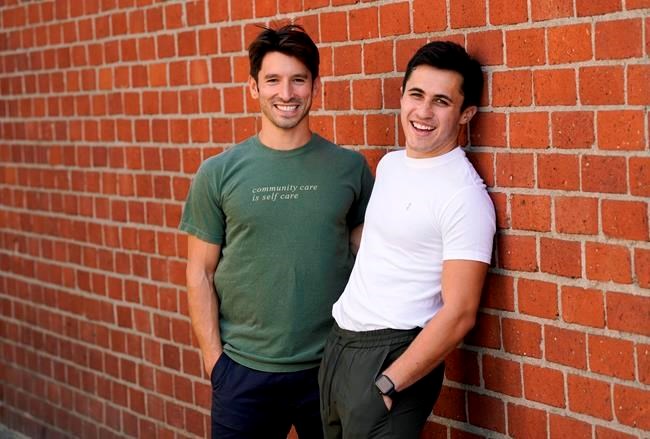 NEW YORK — With love and pranks, Ian Paget and Chris Olsen are among millions of U.S. newbies looking to soak up social media stardom on TikTok.

The Los Angeles boyfriends have amassed a steady stream of fans, with more than 4 million followers laughing and encouraging them in comments on their goofy dance videos, heartfelt vlogs, and affirmations during a tumultuous time for the world and for the popular platform.

While Paget and Olsen, along with millions of other creators, aren't breakout stars like dancer Charli D'Amelio or Nathan Apodaca (the guy with the cranberry juice and long board), they symbolize something else on TikTok. Their care for each other shines through for a range of supporters, from middle-age moms to LGBTQ youth struggling to come out.

And they've grabbed their chunk of success after meeting last year and moving in together just a few months ago to wait out the coronavirus crisis as their new love blossomed.

Paget, 33, is an actor thrown out of work by the pandemic. Olsen, 22, is a college senior finishing school on Zoom. Paget is the wildly articulate one who's endlessly surprised by Olsen, the deadpan trickster. They've made more of the platform than the average TikToker, sharing their coming-out stories and milestones, their daily lives and kisses, along with some tears and rough times, like Olsen's hard-fought victory over alcohol.

You'll find no maskless “Karens” on their account, @olsennchris, or police confrontations, natural disasters or bullying . What you'll discover are two guys who have become the two gay dads to many of their “bloomers,” as they've nicknamed their tribe. And they often do it with shirts off and sculpted six-packs on display.

“We’re going to make the most of it and enjoy doing what we do,” Paget told The Associated Press.

Added Olsen: “We're letting people into our lives. It's something new that people hadn’t seen, especially from two gay men.”

Adorable uncles would be more like it. And politically engaged ones at that. They recently chatted on Instagram about the need to vote with Rep. Katie Porter, the California Democrat who loves her white boards.

For the record, Olsen and Paget don't have kids or plans to marry any time soon, to the chagrin of some diehard followers. Other fans fret that TikTok will pull them apart. They make it clear to their audience that they’re still getting to know each other after celebrating their first anniversary in September.

In 2018, TikTok had more than 11 million active users in the U.S. By this August, more than 100 million Americans were on the platform, according to legal documents filed by the company. Globally, it went from about 55 million users at the start of 2018 to nearly 700 million this July.

Olsen and Paget arrived on TikTok in April, considering it a fun distraction in lockdown. By July, they were gaining about 120,000 new followers a day, with their count now at more than 4.3 million and climbing. After President Donald Trump threatened to shut down TikTok in the U.S., the pair added YouTube about two months ago and hit 100,000 in a month. With admirers following them over from TikTok, they have more than 134,000 YouTube subscribers (find them at Chris & Ian) and continue to draw more.

Their audience is a bit surprising, Olsen said. It's mostly women and girls in a range of ages and ethnicities. The couple's support and advice for LGBTQ young people has landed on grateful ears, reflected in the mostly positive comments left under their minute-long videos.

“I thought when we started it as two gay men, maybe our following was going to be mostly gay people,” Olsen said. ”Part of it is that we are not playing into our gayness, in a way. Not that there's anything to play into. We are just being ourselves. That just is. With our comfortability with each other, it's kind of just showing people these are people that you know.”

Paget is in it for that, but also for the art and of it all. His stream-of-consciousness reactions to Olsen's pranks (stock-in-trade on TikTok) just might make him one of the planet's most patient people. After Olsen flicked his hand away to gauge his reaction in one video, Paget thought- to homophobic hydrangeas that can't focus on their blooming because they're filled with hate, leading to one of the catchphrases — “focus on your blooming” — that adorn the thousands of dollars in merch they sell.

"I just want to say what I want to say and be real. There was no pretense. That's how I talk. This is how I passionately convey what I'm feeling in a sometimes loving and sometimes emphatic way," Paget said.

His at times edited reactions have led some fans to wonder whether scripts are involved, especially as Olsen continues to ensnare Paget with crazy couples challenges that have him fake sniping at his loved one or hopping in his boyfriend's shower, clothes and all.

Is Paget truly surprised all these challenges later?

"Certain ones, yes. Sometimes I get a morning briefing,” he admits.

Whether dancing, vlogging or pranking, they're a pandemic success story no matter where the coronavirus and TikTok lead them.

“Ian and I found each other at a perfect time in each other's lives, I think,” Olsen said. “There was an instant attraction.”

And they found TikTok at the perfect time as well. Now, they're soaking up product placements like Timberland boots and the meal prep service Hello Fresh, and companies are dropping into their comments in search of collaborations.

“TikTok really found its way into everyone's life during the pandemic," Paget said. "It was like a medicine everyone needed. The way Instagram makes you compare yourself in a sort of perfect world, TikTok was not that. TikTok is like silly, fun, quirk, enjoy, imperfection, support. There's a lot of rooting for the stranger who's a great singer who lives in Ohio. It just came at the right time and brought people a lot of joy.”