A Ladner dad has built a backyard rink for his young boys.

Chris Dinter said it was unreal and magical, and something he’ll remember for the rest of his life, to see his kids Sam, 6, and Jack, 4, play hockey on the rink Tuesday night. 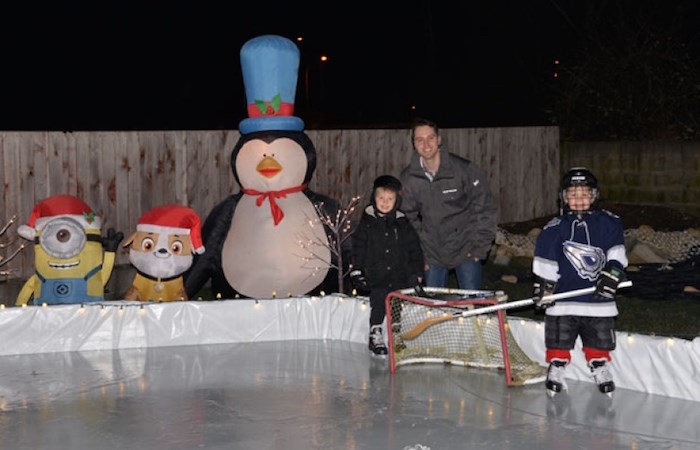 “Me and the boys had been all checking the weather forecast non-stop all winter, and when we saw the cold-snap coming we started a countdown of days until the ice rink froze,” he said in an email to the Optimist.

Dinter said the biggest challenge in building the rink was simply waiting for the weather to get cold enough.

“In November the feedback from my friends and family was a bit of excitement (mixed with ridicule for the idea of building a rink in Vancouver) for the upcoming winter and the possibility of using it, by the time December and January had passed, everyone has basically written it off as a waste of time… there were a lot of jokes made about my new ‘swimming pool’ that was sitting in my backyard collecting rain-water and how this was just another one of my crazy schemes that wasn’t going to work out,” he explained.

Dinter, a big hockey fan, mostly worked on the 60 foot x 24 foot rink during his spare time on weekends. Dinter, who works at a logistics company, used junk wood from his job to build the boards while the only money he had to spend on the project was for a plastic cover which he ordered online.

Dinter had some help from friends and his “kids helped with moral support mostly, and passing me nails when I needed them.” 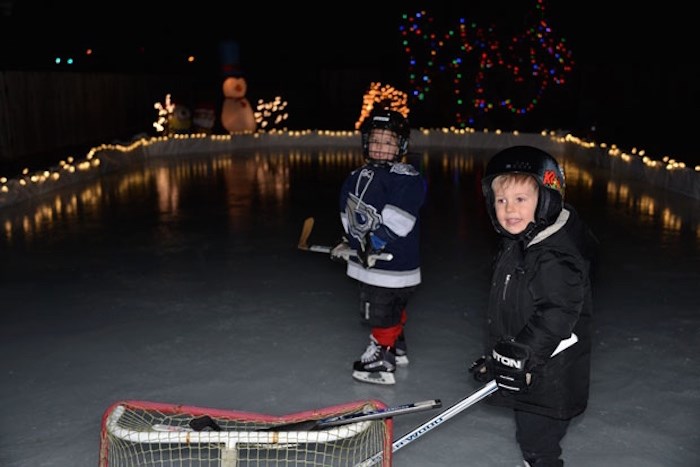 “After reading it, I begged my dad to build me a rink, but it really made no sense in Vancouver’s climate, so every year I asked, and every year my dad refused. And I distinctly remember saying, when I’m a grown up, and I have kids of my own, I’m going to build them an ice rink, even if it doesn’t make any sense… and so this year, I did.”

Both Sam and Jack like the Vancouver Canucks. Their favourite players are Bo Horvat and Brock Boeser.