This week, actor Ben Schwartz turned to Twitter to put out the call for intel on Vancouver. The results were AMAZING.
0
Jun 27, 2019 10:44 AM By: Lindsay William-Ross

Celebs: They're just like us. They go on social media in search of input from friends and strangers on what to do when they travel to a new city. You know, get some restaurant recommendations, network with peers, find out what's worth checking out.

This week, actor Ben Schwartz - perhaps best known as having played Jean-Ralphio Saperstein on TV's Parks and Recreation - turned to Twitter to put out the call for intel on Vancouver.

Vancouver skyline at sunset as seen from Stanley Park / Shutterstock

The results were AWESOME, drawing out everyone from actor and Vancouver native Ryan Reynolds to star chef David Hawksworth to even the Gastown Steam Clock (the latter throwing down some killer shade).

What began somewhat innocuously with "Anyone else filming in Vancouver? Also Vancouver residents! I will take any/all recommendations- restaurants, things to do, outdoor/indoor basketball courts, Bryant Reeves museums, improv theatres, etc. Teach me your ways! I finally understand @VancityReynolds twitter handle!" has resulted in a reply thread over 500 strong and growing. (Sometimes the word "epic" is really merited, mmmkay?)

Anyone else filming in Vancouver?

Among the replies include some of Vancouver's beloved landmarks and venues, offering up some insider access. (PS: Hey Dr. Sun Yat-Sen Classical Chinese Garden, can WE come hit the gong???)

You otter come hang with us! pic.twitter.com/kR8j7bpI2R

Lots of great suggestions in Chinatown: @kissatanto @baobei1 + more. With the experiential pass from @MyVancouver, you can also come visit us at the Classical Chinese Garden! We'll even let you hit the gong -- just DM us 😉 pic.twitter.com/IVmkfxuggU

And then the Steam Clock lobs back with the smackdown:

"I beg to differ. Come by anytime! You can take a photo with me, I won’t tell. #SteamWorkMakesTheDreamWork #LivingThe Steam 🕒💨🎶"

Of course, Schwartz has some celeb pals (and Vancouver enthusiasts) who chime in, particularly those with tips for where to eat.

Actor Ike Barinholtz swoops in with a rec for "Any place where @ChefHawksworth is cooking." And guess who chimes in? The chef himself. "Ben, let’s hang and eat. How long are you in town?" 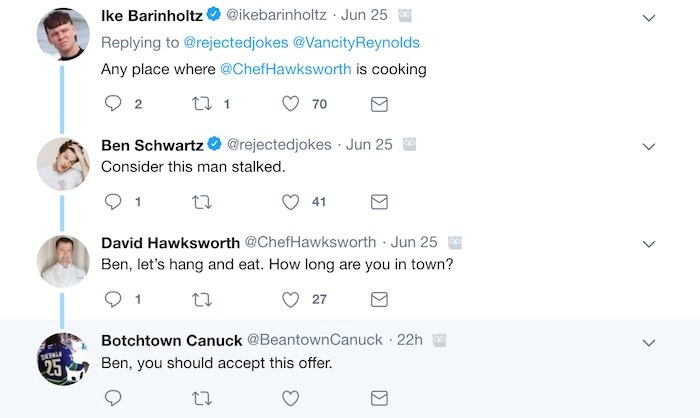 And then there are hundreds of offers from regular folk (among them some top Vancouver foodies with excellent tips). Schwartz could easily spend a year here hitting up Tacofino, St. Lawrence, Minami, Phnom Penh, Nook, Shameful Tiki Room, TransAm, Small Victory, Kobe, Ramen Danbo, DownLow Chicken Shack, Joe Fortes - the list goes on. Truly, it goes on and on.

Then, when it comes to exploring Vancouver, he can bike the seawall, check out the Museum of Anthropology, catch shows at The Rio Theatre, chill at Kits Beach, doing the Grouse Grind, roaming the Richmond Night Market, or even play video games in someone's living room. There are even tips for spending a day in New West, and some very specific show dates and who he should meet up with. And, yes, an outdoor basketball court.

When it comes to Bryant Reeves, Schwartz says he has already seen the documentary Finding Big Country - sadly no word yet on a museum in Vancity.

And since Schwartz asked for improv tips, the thread is jam-packed with them. JAM PACKED.

No joke, if you wanted to have any fun or learn anything or see cool stuff or eat and drink amazing things in Vancouver, this massive thread is EVERYTHING.

So, a warm welcome to Vancouver, Ben. You've already helped us affirm our awesomeness. Oh, and feel free to bookmark vancouverisawesome.com and follow us on social @viawesome. We know what's up.