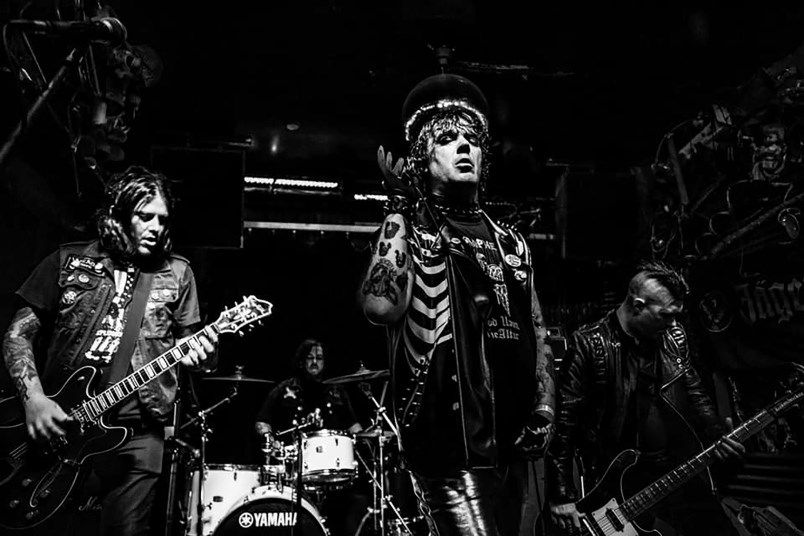 The Black Halos promise to play “all the old stuff” when they perform at the Rickshaw Theatre Feb. 7 and 8.

A couple of years after that first Halos recording session, Millette completed his teenage dream when the Black Halos released their second album, The Violent Years, on Sub Pop.

The Black Halos’ three original members are reuniting to play their first hometown shows together in nearly 20 years Feb. 7 and 8 at the Rickshaw Theatre.

Millette arrived in Vancouver 1995 when he followed his then-girlfriend Jennifer Kiel out here, both of them relocating from London, Ont.

“Vancouver was a lot more exciting than London,” remembers Millette, “with a lot better bands.”

Millette was immediately taken by Vancouver’s roaring mid-’90s music scene, showcased live in clubs such as the Starfish Room, Richard’s on Richards and the Railway.

One night, Millette and his girlfriend caught a band called the Black Market Babies at a show at PD’s Hot Shop, when the legendary skateboard store had a downtown location on West Pender Street.

Black Market Babies featured notorious lead singer Billy Hopeless, considered by many to be Vancouver’s answer to New York Dolls’ lead singer David Johansen. Also in the band was a tall, lanky lead guitarist named Rich Jones, who had grown up in England but had recently arrived in town and immersed himself in the scene, having spent time in Vancouver sleaze-punk band Flash Bastard.

“I thought the Black Market Babies were pretty cool, and it turns out that my girlfriend Jenn knew Billy’s roommate,” says Millette. “That’s how I found out that they needed another guitarist, so I stepped in.”

Soon, the classic Halos lineup of Hopeless, Jones and Millette, along with bassist Matt Camirand (Black Mountain) and drummer Rob Zgalijic (Sparkmarker) came together. Everything clicked. They were a force. The name change happened around 1998, when the seminal Washington DC hardcore band Black Market Baby got in touch. Just before the release of their first album, they became the Black Halos.

I first saw the Halos shortly after Die Young Stay Pretty came out. It was another drunken night at the Starfish Room on Homer Street, but what I can remember clearly is being blown away by the band: huge energy, high quality songs and locked-in harmonies. I also remember how tight the entire band was, both musically and visually, all them with black hair and black clothes from head to toe. I thought they were the best Vancouver band I had seen or heard in years.

The Black Halos’ secret seemed to be the chemistry of the Hopeless/Jones songwriting team. Together they crafted what were essentially catchy pop songs churned up by punk guitars and spat out through the snarling vocals of Hopeless, one of Vancouver’s all-time maniacal front persons.

The Halos reached their height both artistically and commercially with the release of their 2001 sophomore release, The Violent Years, punched up by the solid singles “No Tomorrow Girls” and “Some Things Never Fall.”

The video for the latter song featured cameos by Joey Shithead from DOA, “Metal Queen” Lee Aaron and yours truly, but breakthrough success eluded the band.

A few years later, Jones shocked his bandmates, and the scene, when he announced he was leaving the Black Halos to join L.A. punk-metal band Amen. For Jones it seems like a potential dream gig: after endless van touring in the Halos, here was a punk band under palm trees signed to a major label and playing massive shows around the world. But Jones’ turn in Amen ended in a music industry nightmare a few years later.

“Yeah, Rich leaving the Halos definitely took the wind out of our sails,” says Millette, who also left the Black Halos after Jones to join Vancouver rockers the Spitfires. Billy Hopeless went through several more member changes until hanging up the halo in 2009.

Cut ahead to 2016, and Millette was living in Toronto, playing with a rock ‘n’ roll band called Midnight Towers. Jones was living just down the road in Hamilton.

“Rich contacted me, saying he was writing with Billy again, that they had patched things up. They were putting out a Halos single and touring Spain, and did I want in on it,” says Millette. “But I said no, over and over, every time they called. I had my own thing going on with Midnight Towers. Then, last year, they called again about more shows and recording. I didn’t have anything on my plate, so I said yes.”

Hopeless and Jones also contacted Camirand, who now lives in Summerland, and Zgalijic, who’s still in Vancouver and working for Live Nation, but both of them passed. Filling out the band for the Vancouver reunion shows are bassist John Kerns from Age of Electric and drummer Danny Action from Midnight Towers.

When the three original Halos were finally all in a practice space together for the first time in almost two decades, it didn’t take long for things to fall in place.

“Rich and Billy truly work well together, they are great team,” Millette extolls. “When Billy showed up for practice he just stepped right in and didn’t miss a beat, it was kind of amazing.”

And even though the Black Halos have reportedly written enough new material for a new album, Millette knows what the Vancouver shows are all about.

“It’s all the old stuff,” Millette says. “It’s completely nostalgic. I’m just really excited to be returning to Vancouver to play for a bunch of old friends and to see some of these amazing new Vancouver bands that will be playing with us.”

Judging by ticket sales, hopelessly devoted Black Halos fans are thrilled for another chance to see one of Vancouver’s most notorious rock ‘n’ roll bands back in action. And now that the violent years are over, I’ll see you in the front row. I hope.

This popular mobile bookstore is setting up shop in Vancouver’s Hastings-Sunrise
Dec 2, 2019 4:02 PM