Cannabis retail stores are being listed for sale on B.C.’s Multiple Listing Service for the first time since marijuana was legalized in Canada.
Sep 23, 2019 12:22 PM By: Joannah Connolly 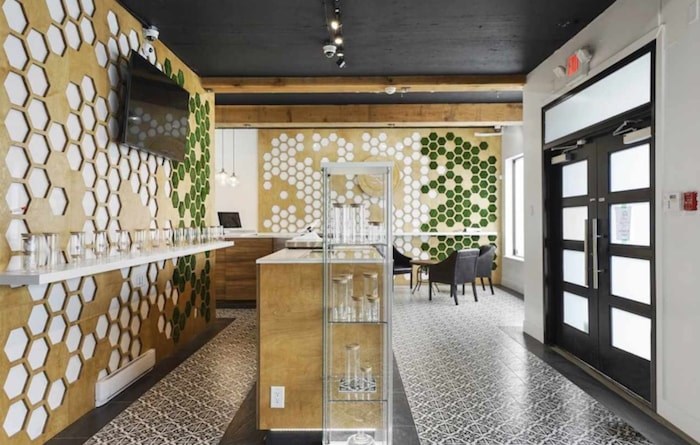 This retail space is currently operating as an EggsCanna cannabis store, and is listed for sale on B.C.’s commercial MLS for $2.5 million. Image via Vancouver Business Brokers

Cannabis retail stores are being listed for sale on B.C.’s Multiple Listing Service for the first time since marijuana was legalized in Canada, according to a press release from commercial brokerage Vancouver Business Brokers.

The first two listings are both in East Vancouver, and both currently tenanted and operating as EggsCanna stores. One is on East 16th Avenue at Main Street, with 900 square feet of store space in a highly desirable location, currently renting for $6,000 a month, and is listed for $2.5 million.

The other is a "flagship store" at Hastings and Nanaimo with a whopping 4,000 square feet of store space. It has been operating for four years, rents out for $16,829 a month, and is listed at $8.5 million.

Vancouver Business Brokers said in a press release, “With highly bullish projections for the cannabis market in the coming years and decades, all business operations involved in managing the sector have the potential of creating highly rewarding opportunities for stakeholders, according to the 2016 report of Canada's Task Force on Cannabis Legalizations and Regulation. Since Canada's recent legalization of cannabis, and its various products, the $100+ million market has become a regulated industry, creating opportunities for a wide range of business activities.”

It added, “In British Columbia alone, the number of cannabis consumers is expected to reach 725,000 by the end of 2019, making the province the third-largest cannabis market in the country. Unfortunately, the province has yet to capitalize on this huge market with very few licensed stores operating in major cities. Due to the slow progress in licensing of new cannabis stores, the province has been unable to fully benefit from the market potential.”

Paul Mon-Kau, senior broker with Vancouver Business Brokers, said, “Listing these cannabis stores on the MLS shows how times have changed and how much we have progressed as a country. Not just in how governments are treating this product in a calculated and sensible manner, but also in how the entire industry has evolved in such an amazingly short amount of time.”

Oana Nicoara, a cannabis advocate and owner of EggsCanna, said, “It is always wonderful to see the inclusion of cannabis businesses. For the pioneers of this [cannabis] industry, these milestones are meaningful and victorious.”