One Awesome Thing: A cirque cabaret is finally coming to QE Park 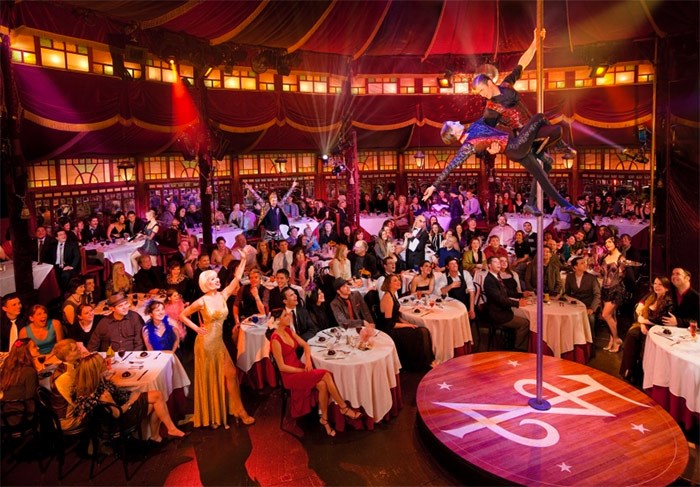 Gourmet cirque cabaret Teatro ZinZanni has been running in Seattle since 1998. Vancouver park board this week approved bringing a similar show to Queen Elizabeth Park for a five-month run starting in November 2018. Photo Michael Craft

A new, high-flying entertainment experience is heading to Vancouver.

Park board commissioners Tuesday night approved a special event permit for a gourmet cirque cabaret show that will run over five months between Nov. 1, 2018 and March 31, 2019 at Queen Elizabeth Park.

The three-hour event is staged inside an antique magic mirror tent, called a Spiegeltent, that seats approximately 300 people. Shows would take place from 7 p.m. until 10 p.m. four to six nights a week in the park’s south parking lot.

Gourmet cirque cabaret was first introduced to North America by German company Pomp Duck and Circumstance in New York in 1995. The following year it expanded to Atlanta. A permanent show, Teatro ZinZanni, has been running in Seattle since 1998.

Event producer Scott Malcolm, principal with Bacio Rosso Entertainment Inc., proposed bringing the experience, Bacio Rosso – A Feast for the Senses, to Vancouver. It will be the first gourmet cirque cabaret hosted in Canada.

Malcolm is the past artistic director of both Teatro ZinZanni and Palazzo.

Green Party commissioner Stuart Mackinnon voted against granting the permit, saying he has long had concerns about the commercialization of public spaces. He also voiced concerns over the length of the show’s run, and the potential impacts of noise and traffic on the surrounding neighbourhood.

“Our park space is meant for people,” he said.