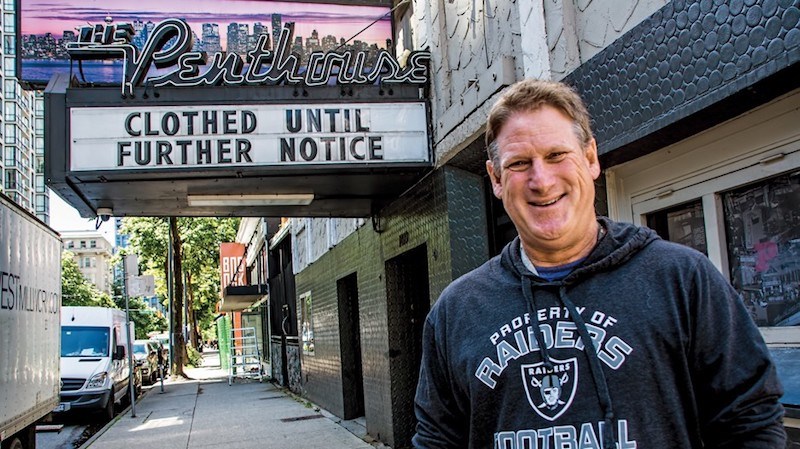 Penthouse Nightclub owner Danny Filippone: “I have a funny feeling that we won’t be opening probably until the first week in September unless I see a fantastic response between July and August” Chung Chow / BIV

“LONGEST 2 WEEKS EVER,” read the marquee outside Vancouver’s storied Penthouse Nightclub in March 2020.

The province had just gone into lockdown mode amid intensifying health concerns over COVID-19. Tension, stress and uncertainty over the pandemic were all palpable.

But the pandemic quickly surpassed two weeks – and the Penthouse hasn’t opened its doors to any business since the month the marquee went up.

And even as B.C. approaches the potential transition to Step 3 of its reopening plan as early as July 1, Filippone is skeptical the infamous strip club will be operating by then.

“I can’t go ahead and hire a full staff right now,” he said, describing the current situation as a “guessing game.”

Restaurants and pubs have been able to extend liquor service from 10 p.m. to midnight as part of the transition into Step 2 of the reopening plan. But it’s unclear whether transitioning to Step 3 would allow the Penthouse to serve liquor until 2 a.m., as its current licence allows.

“There was a time when we could have opened with limited capacity, and it just didn’t work,” Filippone said.

The club didn’t open until 9 p.m. prior to the pandemic and closing by 10 p.m. just didn’t make sense.

Is a strip club considered a bar, nightclub, or event?

And for weeks there was confusion about how an establishment such as the Penthouse would even be classified under provincial orders: Was it a bar? A nightclub? With disrobing dancers on stage the primary draw, the strip club was eventually determined to fall within the events category, like indoor concerts.

Filippone said he believes the Penthouse is the only Vancouver strip club to have stayed closed throughout the pandemic. For now, he’s preparing for an August 1 return.

“But really, I’ve told my staff … I have a funny feeling that we won’t be opening probably until the first week in September unless I see a fantastic response between July and August,” Filippone said.

It’s unlikely regulars at the strip club want to see dancers in masks while patrons and workers alike try to navigate through Plexiglas shields – an experience Filippone compared to a visit to a hockey rink.

And opening up at the height of summer also means the Penthouse will be competing with patios, whose numbers have surged across Vancouver during the pandemic.

“The patio sort of saved everyone [in the restaurant industry], but when you’re in the nightclub industry like we are, we don’t have a patio – there’s no window,” Filippone said. “It just didn’t make logical sense to be one of the first to open in July for all those reasons.”

Over the past 16 months, the club’s bartenders and servers have picked up other work in construction or delivery if they haven’t been able to find gigs at restaurants.

The dancers and DJs are contractors, and Filippone is confident most workers will return.

“The bar is family-based and family-run, and our average employee stays for seven to 10 years,” he said. “We have a hard time getting rid of employees versus finding employees.”

While other establishments have cut deals with landlords and tapped support from government to avoid going under during the pandemic, the Penthouse property has remained family-owned since the 1940s.

“That’s basically what saved us,” Filippone said, adding property taxes and insurance costs have been the biggest ongoing expenses during the pandemic.

Big changes for guests when they return

But with the lights out for more than a year, Penthouse regulars will notice big changes upon their return.

The seating will be more segregated, VIP-style, and the washrooms, stage, carpet and sound system have also been overhauled.

“Not opening, I think it’s going to play in our favour because a lot of the people who follow nightclubs and our types of business knew that we were one of the bars that didn’t open,” Filippone said. “I know a lot of people respected that. And I hope that we get that sort of ‘thank you’ back when we finally do open.”

Check out these awesome food and drink events in Vancouver this August
Aug 1, 2021 1:45 PM
Comments